Load Capacity: Concrete Types And How They Behave 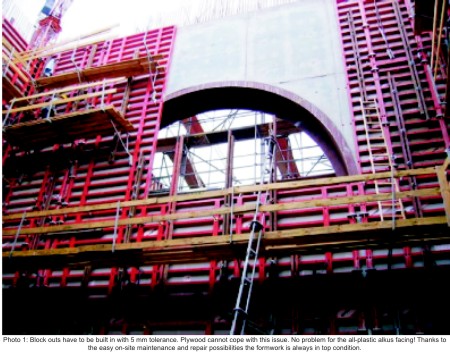 Accurately calculating and predicting the pressure that poured concrete will exert on the formwork, is one of the most important tasks when planning on-site concrete works. Sure knowledge of the expected loads will enable the site to choose the best building technique and the appropriate technical equipment.

The introduction of new concrete types with additives and different setting patterns underlines the challenge of predicting the load to be expected when pouring them– especially since, up to now–there was little definitive experience to draw on. Methods of calculating concrete pressure used hitherto do not take the new concrete types into account and cannot be safely used when pouring them. Yet, with architectural structures becoming slimmer and finer and fair-faced concrete finish increasingly being demanded, it is precisely this new type of concrete that is being used increasingly. The uncertainty about the chemical interaction between additives and their possible influence on the hydration progress and final setting is immense. 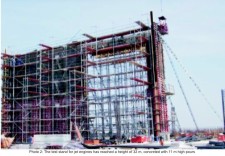 Up to now, fresh concrete pressure was often determined using the German DIN Standard 18218 dating from 1980 or the English CIRIA Report (Construction Industry Research and Information Association). Both assume a basic concrete recipe consisting of three simple components as used in the 70´s and whose characteristics are set out in the DIN 1045 and DIN 1048 German Standards. Concrete recipes being used predominantly in Europe no longer behave that way: slump and setting behavior are distinctly different.

Self-compacting concrete, used especially for difficult geometries to pour into heavily reinforced, slim structures, exert higher pressures on the formwork. Drawing on laboratory tests, a general rule of thumb was followed: take hydrostatic pressure to determine the load capacity of the formwork. That seemed to put everyone on the safe side. This is why the formwork was often set out for too heavy a load.

To fill this gap in competence thus became an urgent matter, since safety on the site demands knowing what kind of pressure the concrete poured will exert. Without proven and tested methods of doing so, it would be only a matter of time before something could go seriously wrong with threat to life and limb during construction. The task was to extend the DIN standard 18218 (1980) to include concrete consistencies F5, F6 and SCC.

MEVA´s engineers were the driving force in updating the DIN 18218 and developing appropriately simple methods of safely calculating concrete pressure. The theoretical formulae were tested in practice and brought on-site for final verification. The results and insights have now found their way into the revised DIN 18218 and provide a secure basis for any construction engineer to work with. 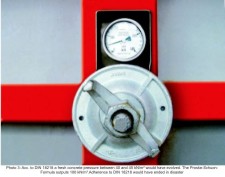 MEVA stands for sophisticated formwork systems, continuous product development and comprehensive services. Since its foundation 35 years ago MEVA has launched numerous innovations, and is now among the leading, globally operating companies in formwork technology. MEVA provides a dense distribution network with branch offices, subsidiaries on different continents and specialized dealer. This offers contractors all over the world competent advice and backup for the planning and construction of sophisticated buildings.

A calculation of the concrete pressure according to DIN 18218 is now possible for concrete consistency in all categories from F1 to F5 and F6 as well as for self-compacting concrete. The new calculation method is based on the Proske-Schuon-Theory. This approach takes into consideration the setting behavior of concrete, which depends on consistency and temperature. So, the site can determine maximum pour rate from simple diagrams. All concrete types are depicted according to maximum fresh concrete pressure and the corresponding maximum pour rate. A distinction is made between final setting at 5 and 15 hours. 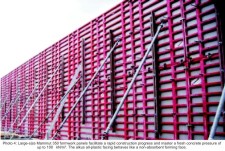 The revised DIN 18218 takes into account the increasing use of self-compacting and flowable concrete mixtures on today´s building sites. The new, simple-to-use diagrams enable the site to safely determine the concrete load to be expected and thus choose the appropriate formwork to handle it. The advantage is twofold: assuming too much concrete pressure would be waste of money and material; assuming to low a concrete pressure could endanger the safety of everyone on site.

One of the most challenging projects on which to test and prove the new concrete pressure calculation method was the construction of the Testbed for Rolls-Royce engines in Arnstadt near Erfurt in Germany. Around 200 turbofans of the Trent 500, 700 and 900 series that power the new Airbus A 300 series will be tested, maintained and overhauled in the facility every year. These engines power the Airbus A330, A340-500/600 and A380. The construction plans place exceptional demands on the formwork solution and the concrete finish.

The test stand for jet engines comprises four segments. The engines are brought into the testbed through a large, hermetically closed gate. For simulation purposes, air is drawn in through a 23m high intake funnel. Behind the engines, exhaust fumes are discharged through an exhaust chamber, 11.80m high and from there through a 32m high exhaust funnel to the outside. Extreme air pressure and speed demand exceptionally low porosity in the concrete finish. The smallest particles on the wall surface would in effect turn into little missiles as a result of the extreme pressure.

Therefore, the inside walls need to have a hermetically sealed surface corresponding to category 4 of the classification for fair-faced concrete published by the Deutscher Betonverein (German Concrete Association) [edition: August 2004].

Unique for Site-mixed Concrete: Mammut 350 takes concrete pressure of up to 11 m high pours in one go

Mammut 350 is a sophisticated system with a load capacity of 100kN/m2. Strong enough to build 75 cm thick walls with a pouring rate of 1 m/h - in pours of up to 11m and a total wall height of 32m. It is unique for on-site concreting to pour such wall heights with flowable concrete. Thanks to the large-size panels 350/250 a surface of 8.75m2 can be assembled with just one panel.

This represented a great advantage for the Arnstadt jobsite in assembling the formwork for the large wall segments of upto 290m2. Two panels stacked vertically achieve the required 7m high formwork units with only one horizontal joint, or with two joints when 11m high. The absolute symmetry of the panels offers a perfect tie hole and joint pattern.

The heavily reinforced walls require a suitable concrete and therefore theconstruction parties developed a recipe. Finally, a CEM III concrete with a low water-cement-ratio was chosen, which had to fulfil the requirements of a concrete consistency of F5 to F6 according to the new DIN standard 1045. As a consequence, flowability was optimized by using a polycarboxylate-ether (PCE). 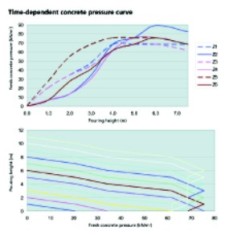 A calculation of the concrete pressure according to DIN 18218 is no longer possible for a concrete consistency of F5 to F6 as it is used on this project. However, MEVA is a member in the study group Fresh Concrete Pressure of “Flowable Concrete”, which, in 2006, published a DAfStb- eport of the same name (DAfStb = German Committee for Reinforced Concrete ) . In the context of this study, and with the involvement of academics from different universities and experts from other companies, a new calculation method was developed which is based on the Proske-Schuon-Theory. This approach takes into consideration the setting behavior of concrete, which depends on consistency and temperature.

On the testbed project in Arnstadt, the reliability of this academic formula was verified under on-site conditions. A number of similar building segments were poured under comparable external circumstances. The concrete pressure was gauged during the placing of concrete.

Under these circumstances, the calculation according to DIN 18218 led to a fresh concrete pressure of 40 to 45 kN/m2.

For the PCE­modified concrete used here, the rate of pouring was determined to be 1 m/h and the final setting to becompleted after 9 hours. According to the Proske-Schuon-Formula this results in a fresh concrete pressure of 100 kN/m2. Actual measurements showed pressures between 85 and 100 kN/m2.

The time curve of the fresh concrete pressure on the one hand confirms the DAfStb-report, and, on the other hand, it underlines the necessity to revise the so far accepted DIN standard 18218, which in this case would have ended in disaster if applied uncritically.

The high daytime temperatures required adding a retarder to the concrete, which resulted in the final setting occurring only after 15 hours. Nevertheless, the Mammut 350 has sufficient reserves to cope with load peaks of 100 kN/m2.

The test stand for jet engines in Arnstadt is the first jobsite where several cycles were poured with identical heights and with the same concrete recipe. This allowed the engineers to analyze the concrete pressure curve. The results are astounding, since the on-site values and those arising from the Proske-Schuon-Formula vary only by +/- 5 %. After 15 pours the Proske-Schuon-Theory is thus validated not only in theory, but in on-site practice also. As a result, the progress report was verified in its first phase and the results will form the basis of the extended and revised DIN 18218.