Influence of Curing Types on Strength of Geopolymer Concrete

In order to address environmental effects associated with Portland cement, there is need to develop alternative binders to make concrete. An effort in this regard is the development of geopolymer concrete, synthesized from the materials of geological origin or by product materials such as fly ash, which are rich in silicon and aluminum. This paper presents results of an experimental study on the density and compressive strength of geopolymer concrete. The experiments were conducted on fly ash based geopolymer concrete by varying the types of curing namely ambient curing and hot curing. The ratio of alkaline liquid to fly ash is fixed as 0.4. For all the samples the rest period was kept as 5 days. For hot curing, the temperature was maintained at 60oC for 24 hrs in hot air oven. The compressive strength test was conducted on each of the sample and the results show that there was an increase in compressive strength with the increase in age for ambient cured specimens. For hot cured samples the increase in compressive strength with age was very less as compared to that of specimens subjected to ambient curing. The density of geopolymer concrete was around 2400kg/m3 which is equivalent to that of conventional concrete. Hence, geopolymer concrete has a great potential for utilization in construction industry as it is environmental-friendly and also facilitates the use of fly ash, which is a waste product from coal burning industries.

Demand for concrete as a construction material is on the increase so as the production of cement. The production of cement is increasing about 3% annually. The production of one ton of cement liberates about one ton of CO2 to atmosphere. Among the green house gases, CO2 contributes about 65% of global warming. Furthermore, it has been reported that the durability of ordinary Portland cement concrete is under examination, as many concrete structures especially those built in corrosive environments start to deteriorate after 20 to 30 years, even though they have been designed for more than 50 years of service life.

Although the use of Portland cement is unavoidable in the foreseeable future, many efforts are being made to reduce the use of Portland cement in concrete. It is time to deploy new technology materials like geopolymers that offer waste utilisation and emissions reduction. The term geopolymer describes a family of mineral binders with chemical composition same as zeolite. Hardened geopolymer concrete has an amorphous microstructure which is quite similar to that of ancient structures such as Egyptian pyramids and Roman amphitheaters. Geopolymer pioneered by Joseph Davidovits is an inorganic alumino-silicate polymer synthesized from predominantly silicon (Si) and aluminium (Al) materials of geological origin or byproduct materials like fly ash, metakaolin, Granulated Blast furnace slag etc. The polymerisation process involves a substantially fast chemical reaction under alkaline condition on Si-Al minerals that result in a three dimensional polymeric chain and ring structure consisting of Si-O-Al-O bonds.

The chemical reaction comprises the following steps:Compared with ordinary Portland cement concrete, Geopolymers show many advantages. Low-calcium fly ash-based geopolymer concrete has excellent compressive strength, suffers very little drying shrinkage and low creep, excellent resistance to sulfate attack, and good acid resistance. It can be used in many infrastructure applications. One ton of low-calcium fly ash can be utilized to produce about 2.5 cubic meter of high quality geopolymer concrete, and the bulk cost of chemicals needed to manufacture this concrete is cheaper than the bulk cost of one ton of Portland cement. Given the fact that fly ash is considered as a waste material, the low calcium fly ash-based geopolymer concrete is, therefore, cheaper than the Portland cement concrete. The special properties of geopolymer concrete can further enhance the economic benefits. Moreover, reduction of one ton of carbon dioxide yields one carbon credit and this carbon credit significantly adds to the economy offered by the geopolymer concrete. In terms of reducing global warming, geopolymer technology could reduce approximately 80% of CO2 emission to the atmosphere caused by cement and aggregate industry.

In this paper, an attempt has been made to study the properties of geopolymer concrete such as density and compressive strength for two different types of curing.

Low calcium fly ash (ASTM class F) collected from Mettur thermal power station was used for casting the specimens. Fine Aggregate (sand) used is clean dry river sand. The sand is sieved using 4.75 mm sieve to remove all the pebbles. Fine aggregate having a specific gravity of 2.62, bulk density of 1701.84 kg/m3 and fineness modulus of 2.42 was used. Coarse aggregates of 20 mm maximum size having a fineness modulus of 6.94, bulk density of 1679.7 kg/m3 and specific gravity of 2.87 were used. Water conforming to the requirements of water for concreting and curing was used through out. Alkaline liquids are used in geopolymerisation. The most common alkaline liquid used in geopolymerisation is a combination of sodium hydroxide (NaOH) or potassium hydroxide (KOH) and sodium silicate or potassium silicate. In the present investigation, a combination of Sodium hydroxide solution and sodium silicate solution was used as alkaline solution. Sodium hydroxide is available commercially in flakes or pellets form. For the present study, sodium hydroxide flakes with 98% purity were used for the preparation of alkaline solution. Sodium silicate is available commercially in solution form and hence it can be used as such. The chemical composition of sodium silicate is: Na2O-14.7%, SiO2-29.4% and Water -55.9% by mass.

In the design of geopolymer concrete mix, coarse and fine aggregates were taken as 77% of entire mixture by mass. This value is similar to that used in OPC concrete in which it will be in the range of 75% to 80% of the entire mixture by mass. Fine aggregate was taken as 30% of the total aggregates. From the past literature, it is clear that the average density of fly ash-based geopolymer concrete is similar to that of OPC concrete (2400kg/m3).Knowing the density of concrete, the combined mass of alkaline liquid and fly ash can be arrived. By assuming the ratios of alkaline liquid to fly ash as 0.4, mass of fly ash and mass of alkaline liquid was found out. To obtain mass of sodium hydroxide and sodium silicate solutions, the ratio of sodium silicate solution to sodium hydroxide solution was fixed as 2.5. For the present investigation, concentration of NaOH solution is taken as 8M. Extra water (other than the water used for the preparation of alkaline solutions) and dosage of super plasticizer was added to the mix according to the workability desired. Using the above procedure the mix was designed and the mix proportions are given in Table 1.

To prepare sodium hydroxide solution of 8 molarity (8M), 320 grams (8x40 i.e, molarity x molecular weight) of sodium hydroxide flakes was dissolved in one litre of water. The mass of NaOH solids in a solution will vary depending on the concentration of the solution expressed in terms of molar, M. The mass of NaOH solids was measured as 248 grams per kg of NaOH solution of 8M concentration. The sodium hydroxide solution thus prepared is mixed with sodium silicate solution one day before mixing the concrete to get the desired alkaline solution. The solids constituents of the fly ash-based geopolymer concrete, i.e. the aggregates and the fly ash, were dry mixed in the pan mixer for about three minutes. After dry mixing, alkaline solution was added to the dry mix and wet mixing was done for 4 minutes. Twelve cubes of size 150mm x 150mm x 150mm were cast and compaction was done by mechanical vibration using a Table vibrator.

After casting the specimens, they were kept in rest period for five days and then they were demoulded. The term ‘Rest Period’ was coined to indicate the time taken from the completion of casting of test specimens to the start of curing at an elevated temperature. This may be important in certain practical applications. For instance, when fly ash-based geopolymer concrete is used in precast concrete industry, there must be sufficient time available between casting of products and sending them to the curing chamber. At the end of the Rest Period, six test specimens were kept under ambient conditions for curing at room temperature as shown in Figure 1. Remaining six specimens were kept at 60oC in hot oven for 24 hrs and is shown in Figure 2.

Table 2 presents the density values in kg/m3 at 7 days and 28 days of curing. Density values ranges from 2251 to 2400 kg/m3. The density of geopolymer concrete was found approximately equivalent to that of conventional concrete. As the age of concrete increases, there is a slight increase in density as shown in Figure 3.Variation of density is not much significant with respect to age of concrete and type of curing. 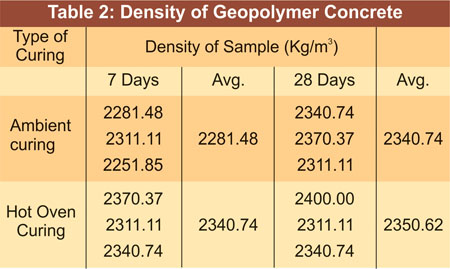 The authors would like to thank Mr. K.Anand Babu, Mr.Gem Tshering, Mr.Sonam Jamtsho and Mr.Upendra Das, final year Civil Engineering students of Sona College of Technology, Salem for their involvement in casting and testing.