In-Place Concrete Strength and Temperature: The Science of Maturity 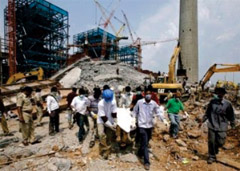 Engineers assume test samples lag behind the in-place concrete in strength due to the difference in the rate of strength gain between the small test sample and the much more massive slab or wall. Because greater mass generates higher curing temperatures, and because concrete gains strength faster at warmer temperatures, concrete test samples typically gain strength more slowly than the concrete they are supposedly emulating, and are generally assumed to be a conservative measure of the concrete strength. The engineering community has relied on this assumption for the entire history of concrete construction, but there are many examples of jobsite disasters where this assumption proved to have deadly consequences. The Willow Island Cooling Tower Collapse in West Virginia (USA) in 1978 is a classic case where 51 workers died because the in-place concrete didn’t match the test samples. The 2009 Vedanta/Balco chimney tower collapse (shown in photo) in Korba, India (more than 40 dead) is another example.

Most of the time, relying on test samples to determine early deshuttering or post-tensioning means that concrete projects are needlessly delayed. Knowing in-place strength is important so these critical construction operations can take place as soon as it is possible, safely. Today, new technology and testing methods can improve jobsite safety by eliminating any guesswork, and as a bonus, dramatically improve scheduling for critical construction operations.

Since 1987, ASTM has recognized The Maturity Method as a means of non-destructively estimating in-place concrete strength (C1074). In the USA and Europe, virtually every standards body and concrete organization now recognizes concrete maturity testing as a valid and critically important concrete assessment tool for bridges, roads, structures, highrises, precast concrete, or any other significant concrete project.

Conducting this test is quite straightforward. One simply needs to first create a calibration strength curve based on the specific concrete mix design being used, and then monitor and record concrete temperatures in-place. The calibration process uses standard concrete test samples (cylinders, beams or cubes), which are cured under controlled conditions and crushed at specific ages. The strength and ages are plotted, and a calibration curve is generated. Each mix design must be calibrated separately-the method is highly mix-specific. Furthermore, concrete delivered to the jobsite must be "substantially similar" to the concrete tested in the lab. Once the system is calibrated, the in-place concrete is then instrumented with sensors and recording devices. The recorded temperature history of the in-place concrete (Figure 1) is applied to a formula, and an estimate of the in-place strength is obtained (Figure 2). 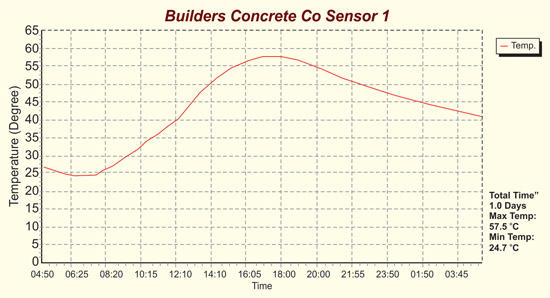 Implementing concrete maturity monitoring on any time-sensitive concrete project brings many benefits. The main benefits include: 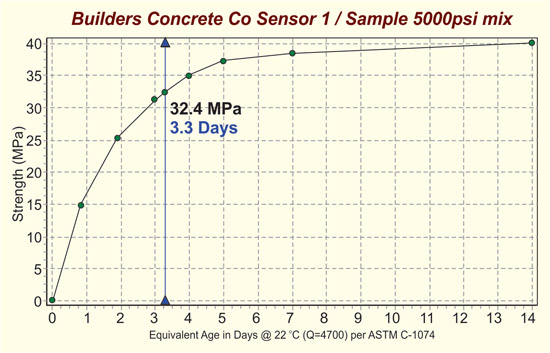 Figure 2. Maturity (strength) "Equivalent Age" graph showing equivalent maturity of 3.3 days (32.4Mpa) after applying only 1 day of temperature history for a typical section of fresh concrete. The in-place concrete has the same strength as concrete cured in the laboratory for 3.3 days (at 22°C).

Maturity systems typically pay for themselves in a remarkably short time period. For example, one contractor reported that they saved $10 (US) per cubic yard of concrete on a 50,000CY project because they were able to optimize their mix designs using less cement while still obtaining ideal results. That’s a savings of $500,000 (US) on the concrete mix designs alone! Considering that their initial investment in the maturity equipment was less than $12,000 (US), that is a very substantial return on the investment, even before the project was completed.

Another metric used to determine ROI is "time saved." For a parking garage, the sooner the owner can open the doors, the sooner he can make money, so rapid construction often carries large incentives. In one recent case, the contractor was able to earn a $400,000 (US) early-completion bonus because they saved one to two days in waiting time for every concrete placement. There were 37 concrete placements, and they saved a minimum of one day for each pour, sometimes more. They were able to complete the project 40 days sooner than planned, with an early-completion bonus of $10,000 (US) per day. The client’s investment in the maturity system was under $10,000. Another way to look at it: They earned $390,000 simply using a maturity system on one project. 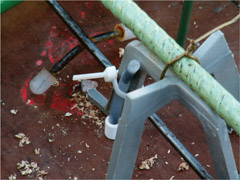 Commercially-available maturity systems can be of great benefit, since all the math is done automatically. One such system, the ZoneCure® System (shown here) from Con-Cure Corporation (USA), features reusable sensors (so the cost-per-test is kept low), and it can even transmit concrete status wirelessly to your email. Imagine pouring concrete and getting an email when it has reached the desired strength! The ZoneCure® system is available in India and all of Southeast Asia through agreement with Samhitha Innovations (Bangalore). 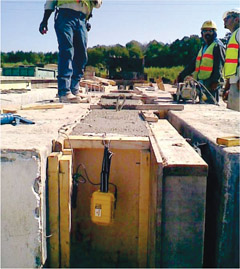 The ZoneCure® system consists of small, reusable sensors that are embedded in fresh concrete at any desired location. In the photo shown here, the sensor is placed inside a sleeve, which is then tied to a concrete support element. The sensor lead wires are routed to the outside of the concrete through the formwork, and the lead is attached to a battery-operated transmitter/receiver/recorder (also generically called a "maturity meter"). ZoneCure® maturity meters (one is shown below monitoring a precast beam) are unique in that they also form a "mesh network" at the jobsite, allowing them to pass data wirelessly to each other, via "hopping" technology. This means the meters can be widely distributed across a jobsite and they will still be able to communicate with the base station wirelessly, so all the concrete temperature and strength information can be observed live, instantly and in real time.

ZoneCure® system costs are determined by the needs of the individual client, and are mainly dependent on the number of maturity meters required. A small system can cost less than $5,000(US), and the system is infinitely scalable for any size project or operation. Even the largest precast concrete producers in the world can equip their entire plant with a highly sophisticated system consisting of multiple wireless "zones" for less than $30,000. There is no jobsite the ZoneCure® System cannot handle. 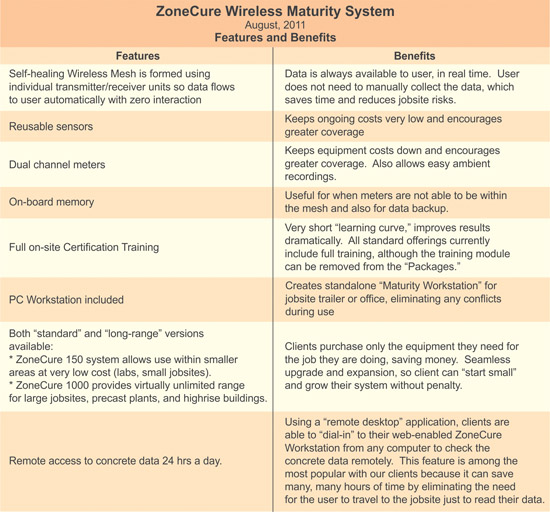 Keep in mind, though, that any maturity system, large or small, will return great dividends to the user because of the dramatic improvements in efficiency, reduction in schedule, and improved safety.