Concrete is the second largest material consumed by the human being in the world next to water. Environmental attack can severely reduce the strength and life of the concrete. In the present study a series of 5 batches of concrete were cast containing fumed silica and the material properties were determined. These properties include compressive strength and permeability. The test results are compared with the values for high performance concrete without fumed silica as a reference mix.

Application of high performance concrete (HPC) has got momentum in various fields of construction globally in the near past. HPC is being practised in the fields like construction of nuclear reactors, runways at airport, railway sleepers, cooling towers, silos, chimneys and all kinds of bridges. Considerable amount of development has been made in the field of HPC using silica fumeas a mineral admixture which is produced from condensing the gases escaping from furnace of a ferro silicon (or) silicon metal manufacturing process. 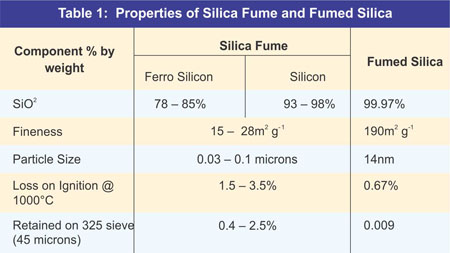 High fineness, uniformity, high pozzolanic activity and compatibility with other ingredients are of primary importance in selection of mineral admixture as per ACI 363R – 5. As per the Table-1 Silica fume has the maximum fineness of 28 m2 g-1 whereas the fumed Silica has the fineness of 190 m2 g-1 which is 6 to 7 times finer than Silica fume. Finer the particle of pozzolano, higher will be the modulus of elasticity, which enhances the durability characteristics of the HPC. 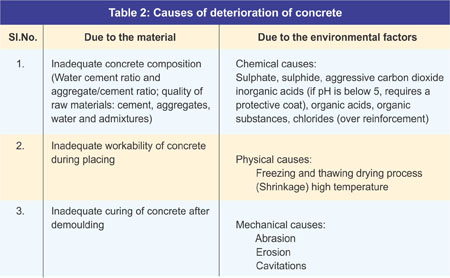 Concrete should be capable of withstanding the conditions for which it has been designed throughout the life of a structure. Lack of durability can be caused by external agents such as environmental changes (or) due to internal constituents of concrete shown in Table-2. Causes can be categorized as physical, mechanical, and chemical. Physical cause arises from the action of frost. Mechanical cause arises due to abrasion. Chemical causes are due to attack by sulphates, chlorides, acids and seawater etc. These causes can be managed by reducing the permeability of concrete (or) by using impermeable concrete. From the durability point of view, it is important to achieve low permeability as quick as possible in the fresh concrete. Factors Controlling Permeability:

There are 3 major factors, which determine the permeability in concrete.Each factor is equally important. If one of these factors is not controlled, the result will be increased in permeability.

It is a high reactive pozzolona made for some purpose. Fumed silica is produced by the vapour phase hydrolysis of silicon Tetra chloride in a hydrogen oxygen flame. The reactions are,

The combustion process creates silicon dioxide molecules, which condense to form particles. Fumed silica is being used in various fields such as pharmaceuticals, paints, adhesives and sealants, plastics, rubber and ink except for concrete.

Properties of the fumed silica and silica fume have been shown in Table – 1. Since fumed silica is much finer than silica fume its influence in the paste aggregate interface was found to be the dominant factor in the development of increased strength.

Under compressive loads, failure in normal Concrete occurs either with in the hydrated cement paste or along the interface between the cement paste and aggregate particles. This interface called the "Transition zone" is a weak area in normal concrete.

To improve the strength and other properties, it is necessary to strengthen the weak areas. Reducing the water-cement ratio and using supplementary cementitious materials like fumed silica tends to strengthen the transition zone. When Portland cement hydrates, a considerable quantity of calcium hydroxide is produced. Fumed silica which has a very high percentage about 99.97 percentage of amorphous silicon dioxide reacts with calcium hydroxide to form calcium silicates hydrates (C-S-H). This improves impermeability as well as strength. There is a distinct change in the refinement of the pore structure in a fumed silica concrete giving less of the capillary pores and more of the finer gel pores, thus by improving the impermeability and strength.

The water demand of concrete containing fumed silica increases dramatically, because of its finerparticle size, but this can be overcome by the use of super plasticizers. Bleeding of concrete mixtures containing fumed silica is almost non–existent. The super plasticizer deflocculates (5) the cement particles and thus fluidifies the mixture so that very low water content is sufficient for an adequate workability. Typically, 5 to 15 litres per of super plasticizer can effectively replace 45 to 70 litres per of water(2).

In the present study, a series of 5 batches of concrete were cast containing fumed silica and the material properties were determined. These properties included compressive strength; permeability. The test results are compared with the values of HPC without fumed silica as a base mix.

Materials: The cement used was ordinary Portland cement. The Physical and chemical composition as provided by the manufacturer is given in Table 3. Naturally available fine and coarse aggregates were used and their properties were shown in Table 4. Portable drinking water was used. High range water reducing admixtures (HRWRA) were used which conforms to ASTM C494 Type A and F.

Mix proportions were arrived based on the guidelines given by ACI 211.1 Slump which were maintained as 25 to 50 mm

A basic trial mix was prepared with above proportioned materials and without fumed silica. Subsequently, four more companion mix was prepared by replacing 5%, 7.5%, 10%, and 15% of cement that required for basic mix with fumed silica, keeping the same slump and W/C+P ratio.

100 mm x 100 mm x 100 mm mould were used to prepare concrete cubes. There are about nine cubes were cast in each trial mix. At the age of 3rd day, 7th day, and 28th day the average compressive strength of all the trial mix are found out and are plotted in chart 1-4. 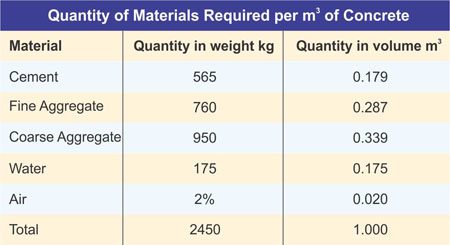 The 3rd day average compressive strength of M60 grade basic mix proportion was only 24 Mpa without any admixture except HRWRA, which was used to maintain the required slump. The 1st, 2nd , 3rd and 4th companion trial mixes in which cement was replaced by fumed silica @ 5%, 7.5%, 10% and 15% respectively of the total cement quantity required for basic mix shows that there were considerable increase in its compressive strength on the same age. This result shows that the use of fumed silica as an admixture gives 'High Early Strength,' so as to attend the emergency repair works immediately.

Five batches of 450 x 450 x 100 mm plain concrete blocks were made to study the permeability of each of trial mix; using Germann water permeability Instruments (GWT – 4000) and the results are shown in Table–5. 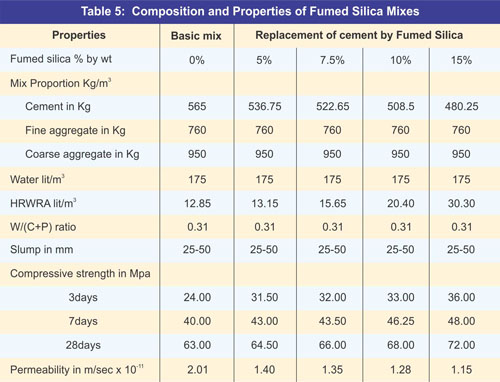 For a fully water saturated concrete without surface porosities and cracking a measure of the water permeability can be obtained without disturbance from capillary absorption. With the GWT – 4000 a sealed pressure chamber is attached to the concrete surface, boiled water is filled into the chamber and a required water pressure is applied to the surface. 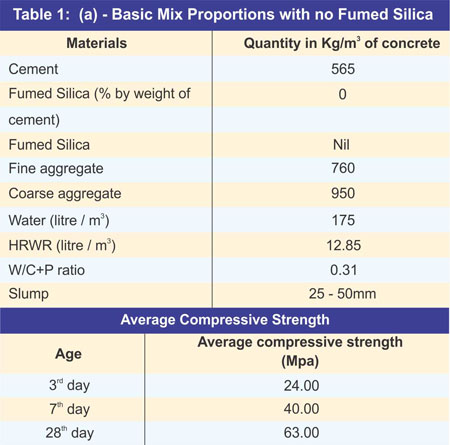 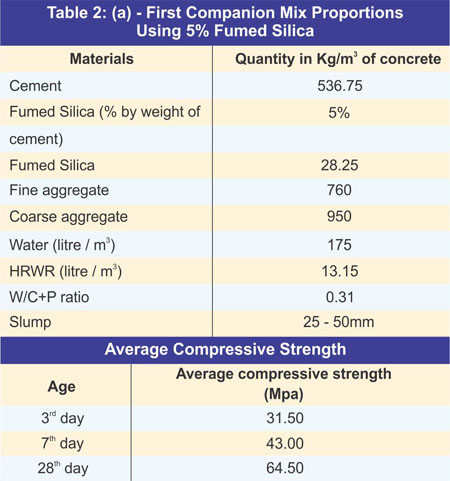 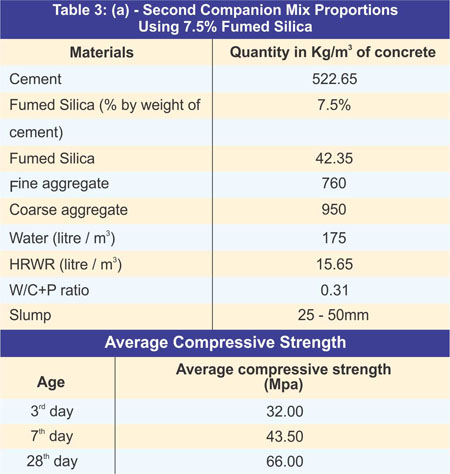 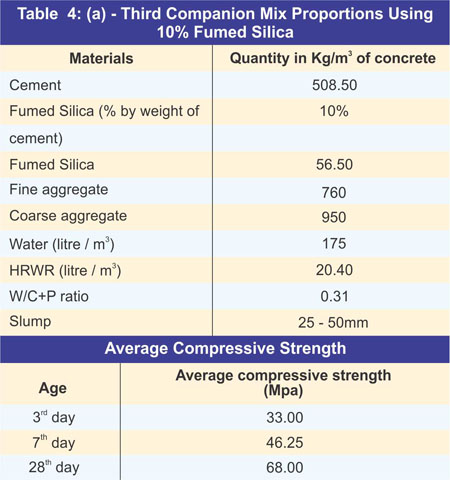 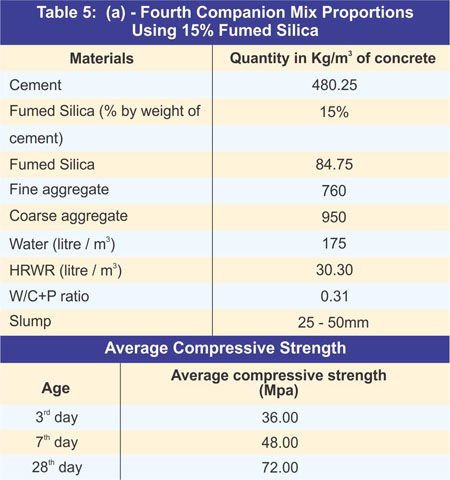 The pressure is kept constant using micrometer gauge with attached pin that substitutes the water leaving the chamber, to Chart 2: First Companion Mix Test Reults Using 5% Fumed Silica measure the amount of water penetrating the substrate. The difference in the gauge position over a given time (e.g., 5 minutes) is taken as a measure of the water penetrability for a given water pressure. The pressure applied here is 5 BAR.


A flux of water penetrating the surface for a given water pressure may be calculated as simply the difference in micrometer readings in mm for a given testing time (e.g. 5 minutes).

Alternatively, the flux q may be calculated for a given water pressure as

'B' is the area of the micrometer pin being pressed into the chamber, 78.6mm2 for the 10mm pin diameter.

g1 and g2 the micro–meter gauge readings in mm at the start of the test and after the test has been finished.

'A' is the water pressure surface area 3018 mm2 (Gasket inner diameter 62mm), 't' the time the test is performed over in seconds.

Mineral admixture such as fumed silica is an ideal constituent for high performance concrete as it has the inherent ability to contribute to continued strength development through their pozzolanic/ cementations reactivity and to enhance durability and chemical resistance through their pore refinement and reduced sorptivity characteristics.