High Performance Concrete Admixtures for Improving the Properties of Concrete

Admixtures are the ingredients in concrete which are other than the hydraulic cementitious material, water, aggregates or fiber reinforcement that are used as ingredients of a cementitious mixture to modify its freshly mixed, setting or hardened properties and that are added to the batch before or during mixing. Admixtures are usually further defined as a non–pozzolanic (does not require calcium hydroxide to react) admixture in the form of a liquid, suspension or water-soluble solid. Some admixtures have been in use for a very long time, such as calcium chloride to provide a cold-weather setting concrete. Others are more recent and represent an area of expanding possibilities for increased performance. Not all admixtures are economical to employ on a particular project. 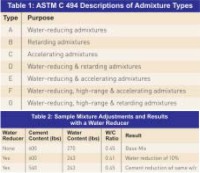 Also, some characteristics of concrete, such as low absorption, can be achieved simply by consistently adhering to high quality concreting practices.

Water-reducing admixtures improve concrete’s plastic (wet) and hardened properties, while set-controlling admixtures are used in concrete being placed and finished in other than optimum temperatures. Both, when used appropriately, contribute to good concreting practices. Also, both admixtures should meet the requirements of ASTM C 494, (Table 1). 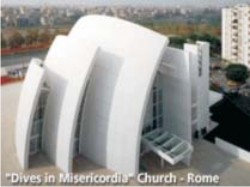 Water reducers decrease the amount of mixing water required to obtain a given slump. This can result in a reduction of the watercementitious ratio (w/c ratio), which leads to increased strengths and more durable concrete.

Reducing the w/c ratio of concrete has been identified as the most important factor to make durable, high-quality concrete. On the other hand, sometimes the cement content may be lowered while maintaining the original w/c ratio to reduce costs or the heat of hydration for mass concrete pours.

Water-reducing admixtures also reduce segregation and improve the flow ability of the concrete. Therefore, they are commonly used for concrete pumping applications as well.

When cement comes in contact with water, dissimilar electrical charges at the surface of the cement particles attract one another, which results in flocculation or grouping of the particles. A good portion of the water is absorbed in this process, thereby leading to a cohesive mix and reduced slump.

Water-reducing admixtures essentially neutralize surface charges on solid particles and cause all surfaces to carry like charges. Since particles with like charges repel each other, they reduce locculation of the cement particles and allow for better dispersion. They also reduce the viscosity of the paste, resulting in a greater slump.

Table 4 presents some of the most common basic materials used for each range of water reducer. Other components are also added depending on the requirement of additional properties of concrete. Some water-reducing admixtures have secondary effects or are combined with retarders or accelerators. This will be discussed later.

Water-reducing admixtures are primarily used to reduce the water-cementitious content of concrete, thus increasing strength. In some cases, they can be used to increase the workability or slump of the concrete providing for easier placement. Mid-range water-reducing admixtures were developed to increase the slump beyond the range available with regular water reducers without the excessive retardation that had been known to occur. High-range water reducers, commonly called superplasticizers, were developed for high-strength and high performance concrete applications.

Superplasticizers, e.g., Multiplast Super can take a 3- inch slump concrete to a 9-inch slump without risk of segregation and without compromising its strength. Many precasters can benefit from the use of a superplasticizer, especially because of its improved high early strength development.

These admixtures, Multiplast R slow down the hydration process. They may also reduce the setting time of cement. Retarding admixtures fall into two categories: regular and extended-set. Regular, most commonly referred to as just “retarders,” are used to place concrete in hot climates when long travel times are expected or, in case of emergency, when placement is delayed. They are also commonly used for mass concrete pours to prevent cold joints.

Extended-set control admixtures are those used to delay hydration for many hours or even days. These are usually a twocomponent admixture system. The first component is a retarder (stabilizer) which delays the setting of concrete. The second component is an accelerator (activator) which overcomes the retarder. The concrete typically reaches initial set in a few hours after the activator is applied.

How they work Retarders essentially slow early hydration by reducing the rate at which tricalcium silicate (C3S) reacts with water. Furthermore, retarders slow the growth of calcium hydroxide crystals. Both reactions develop the early setting and strength gain characteristics of paste. The effect remains until the admixture is incorporated into the hydrated material, thereby removing it from the solution and allowing for initial set to occur. The duration of retardation is based on the dose and chemistry of the retarder, cement composition, temperature and the time it was added to the mix.

Rapid accelerators can set concrete in minutes and are used in shotcreting applications, to make repairs against hydrostatic pressure or when very rapid setting is required. These are typically not used in precast concrete applications.

Standard or normal accelerators are used to speed up construction in cold-weather concreting conditions; however, it is important to note that they are not antifreezing admixtures.

Effect on concrete: Both retarders and accelerators seem to have negligible effects on air entrainment. However, when water-reducing agents are included, such as lignosulfonates, some air may be entrained.

Accelerators typically increase early strengths. However, laterage strengths may be reduced relative to the same concrete without the accelerator. They also tend to increase early-age shrinkage and creep rates, but tests have shown that ultimate values seem to be unaffected.

Some admixture chemistries provide for a combination of effects such as water reduction with retardation or acceleration. Advantages of this include reducing the number of admixtures that have to be stored and added to the concrete; less admixture incompatibility; and cost savings. Disadvantages include less flexibility and limited use when an accelerating or retarding effect is not desired. ASTM C 494 lists specifications for these combination admixtures.