Effect of Mixing Methods in Behavior of Flyash Concrete

Fly ash is a good pozzolanic mineral admixture, which can replace large quantity of cement in the concrete. The positive effects of using fly ash in concrete are better quality of concrete, eco-friendly and preservation of resources. Construction of power plants require huge quantity of concrete and use of fly ash, as pozzolanic material, can improve the durability of structure, thereby enhancing the safety of plants and also economy in the life cycle cost of the plant.

Properties of concrete whether strength or durability depends on constituents, mixing, placing, compaction, curing etc. To get a holistic view on behavior of flyash concrete to be used in major construction of safety structures, study of mixing methods were also included. Mixing method is the specified order in which ingredients of concrete are introduced in the mixer along with the stages of addition, if any, and time of agitation at each stage. Ingredients of Fly Ash based concrete are added into the mixer in different stages and in every stage, it is agitated for a specified period of time.

A multistage mixing sequence with varying time of agitation at each stage was adopted for the study. The details of these mixing methods are given in Table 1. 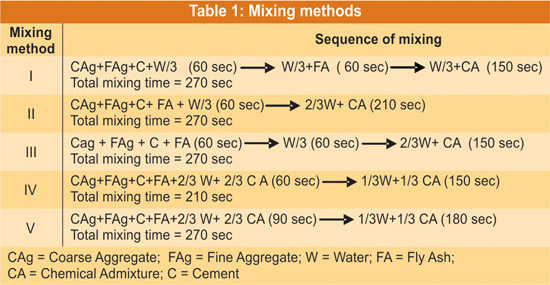 Mix proportions of M50, M35 and M20 grade of concrete with 40%, 50% and 60% cement replacement levels (CRL) respectively for carrying out the study on mixing methods are given in Table 2.

The properties of fresh and hardened state of concrete mixes produced by different mixing methods for M50, M35 and M20 grade identified mixes are given in Table 3. The results for slump are plotted in figure 1.The compressive strength results of mixes at 14, 28 and 56 days produced by different mixing methods for grade M50, M35 and M20 are given is Figure 2. The RCPT result of these mixes at 28 days and 56 days respectively are given in Figure 3. 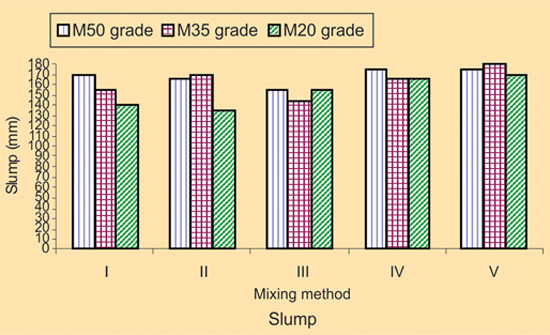 As expected, the mixing method and sequencing has noticeable influence on the behavior of the concrete mixes both in fresh and hardened states. Mixing method, V was finalized for further studies on fly ash concrete, as it is a two stage mixing, and results were satisfactory when fresh, hardened properties and durability aspects are considered together. The optimum mixing method for a given batching plant may be developed before start of the work. The duration of the mixing time corresponding to 270 seconds mixing time for laboratory mixer has to be calculated for equivalent mixing time for automatic batching plant, keeping the mixing energy same.

Authors are grateful to the management of NPCIL for financing the project "Development of FLY Ash Concrete Suitable for NPP Structures," BHAVINI for providing the facilities and AERB, NPCIL for manpower and guidance.