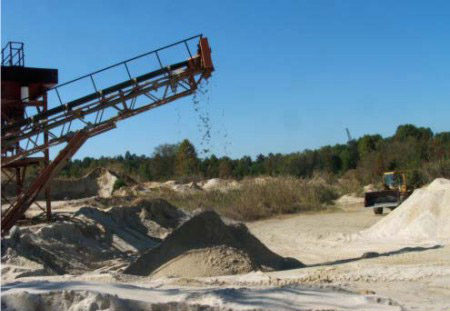 The grading and maximum size of aggregates is important parameters in any concrete mix. They affect relative proportions in mix, workability, economy, porosity and shrinkage of concrete etc. Experience has shown that very fine sands or very coarse sands are objectionable – the former is uneconomical, the latter gives harsh unworkable mixes. Thus the object in this paper is to find the best fineness modulus of sand to get the optimum grading of combined aggregate (all-in-aggregate), which is most suitable, and for economy. In general, the grading of aggregates, which do not have a deficiency or excess of any size of aggregate and give a smooth grading curve, produce the most suitable concrete mix. Further a cohesive mix is also desired for the pumped concrete produced by RMC Plant. In the present investigations, effect of the grading of river sand particles has been investigated for a good Concrete mix. Sand has been sorted in three categories i.e. Fine, Medium, and Coarse. These were mixed with coarse aggregate in different proportions so as to keep the combined Fineness Modulus (all-inaggregate) more or less the same. Various proportions of such aggregate are mixed in preparing M 30 grade of Concrete mix. Effect is studied on concrete workability, cube strength, flexural strength and permeability. The results indicate that with the change in fineness of sand, workability gets affected. The details of findings and its effect on compressive and flexural strength and permeability, influencing durability are reported in this paper.

Fineness Modulus is a term used as an index to the fineness or coarseness of aggregate. This is the summation of cumulative percentage of materials retained on the standard sieves divided by 100. It is well–known that aggregate plays an important role in achieving the desired properties of concrete. Though, aggregate constitute 80 to 90% of the total volume of concrete, yet very littleattention is given in controlling the grading and surface texture of aggregate to optimize the properties of concrete. Improper blend of aggregate influences the cement and water demand for a given concrete mix and affects workability, compactibility, and cohesion characteristics of pumpable concrete mix. It also influences the compressive strength, flexural strength and other properties like permeability & durability of concrete.

Review of Provisions in Different Specifications

AASTHO Designation: M6-93- "Standard Specification for Fine Aggregate For Portland Cement Concrete"- It indicates that the fineness modulus of sand will not be less than 2.3 and nor more than 3.1. Further, fine aggregate failing to meet the fineness modulus requirement as above may be accepted, provided concrete made with similar fine aggregate from the same source has an acceptable performance record in similar concrete construction; or in absence of a demonstrable service record, provided, it is demonstrated that concrete of the class specified, made with the fine aggregate under consideration, will have relevant properties at least equal to those of concrete made with the same ingredients, with the exception that a reference fine aggregate be used which is selected from a source having an acceptable performance record in similar concrete construction.

ASTM Designation: C33-93- standard specification for concrete aggregates"–The fine aggregate shall have not more than 45% passing any sieve and retained on the next consecutive sieve and its fineness modulus will not be less than 2.3 and not more than 3.1. Rest is the same as for AASTHO M6-93.

U.S.B.R: The code has specified that the fineness modulus of sand shall not be less than 2.50 and not more 3.0. 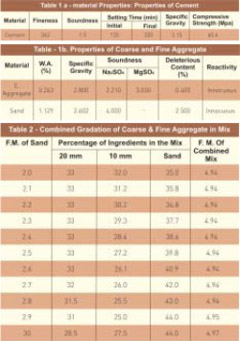 In the present investigations, the effect of Fineness Modulus of sand has been investigated. The Fine aggregate (Sand) taken is Yamuna river sand and coarse aggregate taken is Dolomite limestone in crushed form. It has been sorted in several categories starting the Fineness Modulus (FM) of sand from 2.0 to 3.0. These were mixed in different proportions to get a consistent combined FM. The combined FM is determined like All-in-aggregate FM. In the present study we have selected M30 Grade of concrete mix. To find out the effect of fineness modulus (FM) of sand on concrete, sand of different FM from 2.0 to 3.0 is chosen. Two sizes of coarse aggregate particles: i.e. 20 & 10 mm, which are generally used in standard concrete mix, were chosen for the investigations.

The material properties are given in Table 1.

In this study water-cement ratio (W/C) of mix is kept constant for all the trial mixes with sand of different fineness modulus. Workability of mix is also fixed in range of 45 to 55 mm slump. Since mix with so different fineness modulus of sand, will result in different water demands, so watercement ratio is kept constant and to adjust workability slight adjustments in admixture dosages has been made. Various proportions of such ingredients are mixed in laboratory mixer of 0.1 capacity for preparing M30 grade of Concrete mix. Cubes (150 x 150 x 150 mm size), cylinders (150 Ö x 150 mm height) and beams (150 x 150 x 700 mm length) are cast. Effect of varying FM of sand is studied on concrete density, workability, compressive strength, flexural strength and permeability.

Table 3 gives the total observations recorded during the experimental investigations. Effect on Workability, Density, Strength, and Permeability due to variations in FM of sand is discussed here.

Figure 1, shows the type of slump observed. The results indicate that with the increase in fineness modulus of sand, water demand in the mix got affected consequently workability gets affected. Since water-cement ratio is kept constant, so to keep workability in the same range of 50 mm, admixture dosages were varied. The admixture dosages reduced considerably as fineness of sand increases as shown in Figure 2. The Figure 2 shows that:


Effect of Fineness of Sand on Density of Concrete

After measuring the slump, several 150 mm cubes were filled. These were cured in water tank for 28 days. After curing, each cube was weighed using electronic balance and density of concrete was calculated. The variation of density with FM of sand is shown in Figure 3 for different cases. From this figure, it is evident that there is slight increase in density i.e. 0.80 to 1.20 percent, when fineness modulus increases from 2.0 to 3.0.

Effect of Fineness of Sand on Compressive Strength of Concrete

Effect of Fineness of Sand on Flexural Strength of Concrete

a = distance between the line of fracture and the nearest support (recorded for each sample after test).

The variation of flexural strength with respect to different parameters is also given in Figure 4. This figure indicates the following:


Effect of Fineness of Sand on Permeability of Concrete

Permeability of concrete is determined by using cylinder specimen having 150 mm diameter and 160 mm height. They were applied water pressure of 7 Kg/ cm2 for 96 hours in the Permeability Apparatus shown in Figure 5.

Immediately after 96 hours cylinders were split under line load test. The depth of penetration of water in cylinder was measured as well as volume of water lost is recorded.

The results are interpreted as:
Permeability coefficient = vol. of water lost / (Area of cylinder x Average depth of concrete having effect of penetration of water). 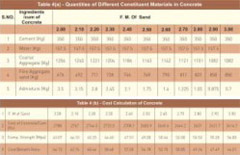 Cost of Concrete mix per is calculated on the basis of unit cost of each ingredient material in the mix. The following market rates have been taken for Cement, Sand, Coarse aggregate, Admixture and a nominal cost for water. No labor cost has been added in the calculation as it will remain constant.

A curve has been plotted between FM of sand Vs C/B Ratio as shown in Figure 6. From this graph, it is seen that C/B ratio reduces considerably as the FM of sand increases. From FM varying from 2.0 to 3.0 the C/B ratio reduces by 71%. Thus, it is advisable to use coarser sand in Concrete.

Fineness Modulus of Sand affects Compressive and flexural strength of Concrete. Sand, with higher FM, results in higher strength of concrete. It is evident by cost benefit ratio that overall concrete mix is becoming economical if we use sand with higher FM. The results indicate that with the increase in FM, workability gets affected considerably. The cement demand also gets modified. Some of the observations are given below:

The work has been carried out in M/ S HCC Ltd. Site Laboratory at Allahabad. The authors are thankful to them and QC staff of M/S BCEOM and HCC for their help.