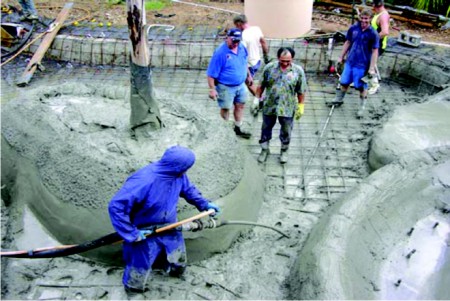 The combined use of silica fume having pozzolanic reaction and filler effect, and super-plasticizer will improve the interface of the materials, thereby enhancing the strength of the concrete, can lead to economical high performance concrete (HPC) with enhanced durability. Addition of steel fibers in to the silica fume concrete alters their brittle character in to a more ductile one, and improves the mechanical properties. An experimental investigation was carried out to assess the durability performance of high-strength steel fiber reinforced concrete (HSFRC) for water to cement material ratios (w/cm) ratios ranging from 0.4 to 0.25. The variation in concrete strength from 55.6 to 86.5 MPa was achieved by varying the water-to-cementitious materials ratios of the mix from 0.40 to 0.25, and silica fume replacement at 5% and 10%. Crimped steel fibers of fiber volume fractions, Vf= 0.5%, 1.0% and 1.5%, with an aspect ratio of 80 were used in this study. Test results indicated that inclusion of steel fibers in to silica fume concrete improves the compressive strength by 13% and concrete mixes are having the better durability performance.

Cement-based materials such as concrete have long been used for the construction of civil infrastructure. However, the deterioration of civil infrastructure all over the world, has led to the realization that cement-based materials must be improved in terms of their engineering property and durability. The use of admixture as silica fume-a highly pozzolanic mineral, is a relatively effective way in improving these properties. ACI 318-95 has recently revised, specifying that structural concrete should have high durability, as presented by water to binder ratio (W/B). A concrete structure is said to be durable if it withstands the conditions for which it has been designed, without deterioration, over the past years. The term durability characterizes the resistance of concrete to a variety of physical and chemical attacks due to either internal or external causes.

Balaguru and Shah 1992, and ACI Committee 544 (ACI 544.1R-96) have reported that the addition of steel fibers in concrete matrix improves all engineering properties of concrete such as flexural strength, tensile strength, compressive strength, and toughness.

HPC is achieved by using super-plasticizer to reduce water-binder ratio and by using supplementary cementing materials (SCM) such as silica fume (CSF), which usually combines high–strength with high durability. Silica fume concrete has been reported to possess lower water permeability (ACI 226-1987). Steel fiber reinforced concrete (SFRC) is a cement-based composite material reinforced with randomly distributed discrete steel fibers of small diameter. It contains pozzolans and admixtures commonly used with conventional concrete. The demand for HSC/HPC has been growing at an ever-increasing rate over the past years, which lead to the design of smaller sections. Reduction in mass is also important for the economical design of earthquake resistant structures (ACI 363-92).

This paper presents an experimental investigation on thedurability properties such as water absorption, coefficient of absorption, air (void) content and sorptivity of HPC with w/cm ratios ranging from 0.25 to 0.4 and silica fume replacement at 5%, 10%, and 15%, and studies the effect of inclusion of crimped steel fibers (volume fractions Vf = 0.5 %, 1% and 1.5 %) on these properties.

Ordinary Portland cement-53 grade having 28-day compressive strength of 53.5MPa, satisfying the requirements of IS: 12269–1987 and condensed silica fume (Grade 920-D) contained 88.7% of SiO2,having specific surface area of 23000 m2/kg, a specific gravity of 2.25, fineness by residue on 45micron of 2% were used. The chemical composition of OPC and CSF are given in Table 1a &1b respectively. 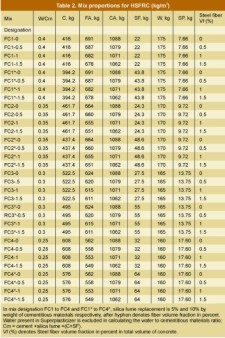 Coarse aggregate: Crushed blue granite stone with 12.5mm maximum size, conforming to IS: 383-1978 was used. The characteristics of coarse aggregate are:

Mixtures were proportioned using guidelines and specifications given in ACI 211.1–1991 and ACI 211.4R–93, recommended guide– lines of ACI 544-1993. Mixture proportions used in the test program are summarized in Table 2. This aspect of work was carried out elsewhere (Ramadoss and Nagamani 2006). Water present in super-plasticizer is excluded in calculating the water to cementitious materials ratio. For each water-cementitious materials ratio, 6 fibrous concrete mixes were prepared with three fiber volume fractions, Vf= 0.5%, 1% and 1.5 % by volume of concrete (39, 78 and 117.5 kg/m3). Super-plasticizer with dosage range of 1.75 % to 2.75 % by weight of cementitious materials has been used to maintain the adequate workability of plain andiber reinforced concrete.

Compressive strength tests were carried out according to IS: 516-1979 [16] standards using 150 mm cubes loaded uniaxially. The tests were done in a servo-controlled compressive testing machine by applying load at the rate of 14 MPa /min. Minimum of three specimens were tested to assess the average strength.

Powers (1968) suggested the use of co-efficient of absorption as a measure of the permeability of water in to the hardened concrete. This is measured by the rate of intake (capillary absorption) of water by dry concrete for the period of 60 minutes.

Sorptivity (water sorption) measures the rate of penetration of water in to the pores of concrete by capillary suction. When the cumulative volume of water penetrated per unit surface area of exposure is plotted against the square root of time of exposure, the resulting graph could be approximated by a straight line passing through the origin. The slope of this straight line is considered as a measure of rate of movement of water through the capillary pores and is called Sorptivity (Hall 1993). This test evaluates the quality of concrete based on surface pores of the concrete specimens. 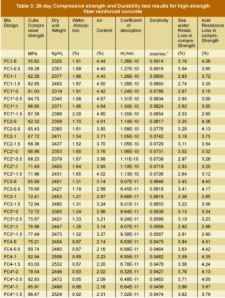 Immediately after the immersion of the cube in to water the start time of the test was recorded; at intervals of 30, 60, 90, and 120 minutes after the start of the test, the specimen was removed from the water tub; after the surplus water was wiped of with tissue papers, it was weighed to the nearest 0.01gm and then returned to the tub. The relationship between water sorption and time was determined by Power (1968) as

Compressive strengths for various mixes are given in Table 3. The 28-day strengths obtained vary from 55.6 to 86.5 MPa depending upon the w/cm ratio, binder content and fiber volume fraction in percent. Table 3 shows that the addition of fiber volume fraction from 0.5% to 1.5% increases the compressive strength by about 13 percent of plain concrete.

For the series of high-strength fiber reinforced concrete mixes contained silica fume having w/cm ratios varying from 0.40 to 0.25, water permeability was unmeasurable.

Results of water sorption for various HSFRC mixes are given in Table 3 and are in the range of 0.0916 – 0.0427 mm/”min (< 0.77mm/”min) indicated that durability performance of concrete containing silica fume is excellent (Navy 1997). Taywood Engineering limited (1993) has suggested that good quality concrete has the sorptivity value less than 0.1mm/”min. Past findings (MacCarter et. al. 1992; Martys and Farraris 1997) indicated that sorptivity can be correlated to permeability, as is a function of porosity, pore diameter, and continuity of pores within the concrete matrix. Figure 1 shows the typical sorptivity plot for HSFRC at 28-days. Bharatkumar et al. (2001) have reported that sorptivity of fly ash concrete (HPC) is in the range of 0.0883 – 0.0627 mm/min 0.5(1.14 x10-5–0.81 x10-5m/s 0.5) which compares well with the present results. It is clear that concrete sorption is closely related to surface pores of the concrete paste. The surface pores reduce as C-S-H gel developed by the addition of silica fume, as a result which decreases the water sorption and hence the durability performance of mixes improves. 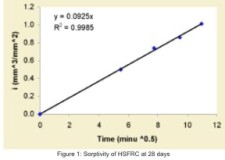 For studying the resistance of HSFRC in sea water, cubes of 150 mm side were weighed and immersed in sea water prepared artificially, (3 % of sodium chloride by weight of water) for 45 days continuously and then taken out and weighed. The percentage loss in weight and the reduction in compressive strength were evaluated and given in Table 3. The maximum loss in compressive strength obtained was about 3.84 % for non-fiber concrete and 2.53% for fiber concrete, indicating that HSFRC mixes have better and higher resistance against sea water. No cracks were formed on the surface of the specimens. This indicated that the reaction between the CaOH and NaCl solution is reduced due to the reduction of harmful lime content in the concrete matrix as CSF reacted with lime present in the paste matrix.

For studying the resistance of HSFRC to acids, 150mm side cubes were weighed and immersed in sulphuric acid solution (containing 1% of sulphuric acid by weight of water) for 45 days continuously and then taken out and weighed. The percentage loss in weight and the reduction in compressive strength were evaluated and given in Table 3. The maximum loss in compressive strength obtained was found to be about 4.51% for non-fiber concrete and 4.42% for fiber concrete, which show that SFRC mixes are less attacked by acid. Less deterioration effect was noticed in the case of SFRC. From the tests, it could be observed that SF concrete/ SFRC greatly enhance the durability in aggressive environments.

Based on the above experimental investigation, the following conclusions can be drawn: