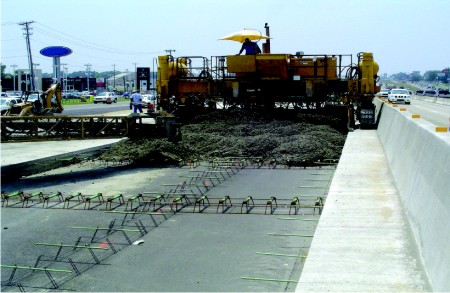 This article presents a comparison between conventional concrete and mineral admixed concrete to be used in the construction of cement concrete pavements. Mineral admixtures such as flyash, rice-husk ash and silica fume were used in this study. These admixtures were selected to arrive at an economical way for enhancing flexural strength of concrete without significantly affecting compressive strength. Ten concrete mixes were used in this investigation. The performance of concrete mixes was evaluated at fresh state as well as hardened state. Hardened state concrete properties such as compressive strength and flexural strength were evaluated. The study suggests that mineral admixed concrete shows higher flexural strength in comparison with conventional concrete. It also reveals that flexural strength can be drastically enhanced by using 5 to 10 percent of flyash, rice husk ash and silica fume as partial replacement of cement. However, from economical point of view replacement of 10 per– cent cement by mass with flyash is a better option for enhancing flexural strength of control concrete to be used in the construction of cement concrete pavements.

The design of concrete pavements (also known as rigid pavements) is based on the flexural tensile strength of concrete as these pavements fail due to bending stresses. The flexural strength (sometimes called the modulus of rupture) of concrete is determined by use of beam specimens under either three-point or center-point loading following any standard test procedure. 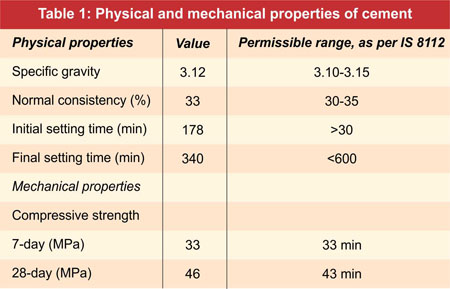 The third-point loading is preferred because in the middle third of the span, the specimen is subjected to pure moment which is not possible in the center-point loading device. Hence, the center-point loading test gives results about 15 percent higher in comparison to three-point loading test. Depending on axle load, present traffic, design life, fatigue consumption etc., the average 28-day flexural strength of at least 3.5 MPa is commonly encountered in practice. This range of flexural strength can be achieved by using concrete of M 35 and above grade depending on its constituent ingredients. In recent past, a lot of research was carried out throughout globe for improving the performance of concrete in terms of its rheology, strength and durability qualities1,2. Consequently, several new constituents such as mineral and chemical admixture of concrete were used to meet the specific need of strength and durability of concrete. The use of mineral admixture in combination with chemical admixture has allowed the concrete technologists to tailor the concrete for many specific requirements. Among the several types of mineral admixture available, the most common are industrial by-products, such as silica fume, fly– ash, blast furnace slag, limestone powder and rice-husk ash etc. Use of these mineral admixtures improve the particle packing density, rheological properties in fresh state and mechanical properties including flexural strength and durability of cementitious system3-9. Amongst the mineral admixtures, silica fume seems to be the most useful for the development of very high strength concretes and/or high performance concrete. Various advantages of using silica fume, flyash and rice husk ash in concrete need not to be overemphasized. Therefore, in this study the relative performance with respect to compressive and flexural strength development of conventional vis-à-vis mineral admixed concretes containing ASTM Class F flyash, Silica fume, and rice-husk ash, for the construction of cement concrete pavements has been reported. 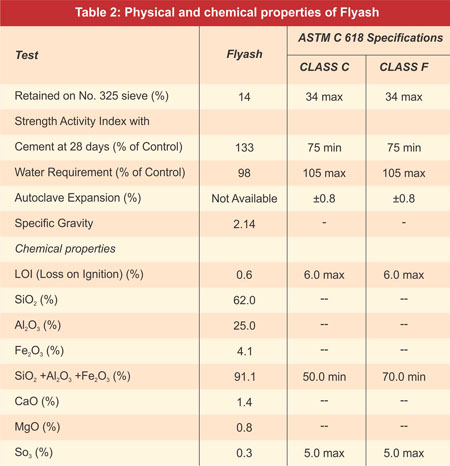 Ordinary Portland cement with properties as given in Table 1 was used throughout this experimental investigation. The cement met the requirements of the Indian Standard specification IS: 8112-198910.

The flyash (FA) used in this study was obtained from a thermal power plant near Delhi and was evaluated as per ASTM C 618 requirements.11 Table2 shows some of the important physical and chemical properties of the flyash. 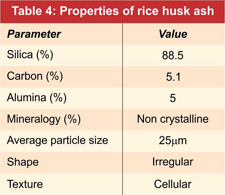 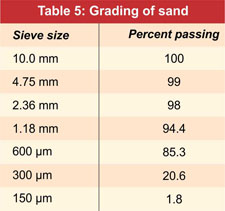 This flyash met the ASTM C 618 requirements. It is therefore, concluded that the flyash may perform satisfactorily in cement concrete.

Silica fume (SF) used in the experimental work had specific gravity of 2.18 and Blaine specific surface was around 450 m2/kg. Some important properties of silica fume used are presented in Table 3.

The rice husk ash (RHA) used was obtained from a commercial plant located at Tharsguda, Orissa, India. Its specific gravity and bulk density were 2.06 and 718 kg/m3respectively. The particles of rice husk ash were finer than 45mm. The various properties of rice husk ash are given in Table 4.

A new generation carboxylic ether polymer based super plasticizer was used as a high-range water reducing agent for this study. 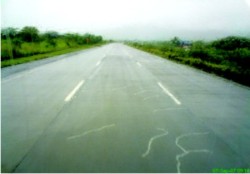 The replacement level was limited to 10% with a notion to achieve 28-day compressive strength similar to conventional concrete and flexural strength at least about 4.0 MPa. The water-to-cementitious material ratio was kept around 0.42 and dosages of superplasticizer were varied in range of 0.2% to 0.4% of binder's mass to achieve a slump value of 75±5 mm. It is worth to mention hat the slump specifications are different for the cement concrete road construction for fixed form paving and slipform paving. Hence, the range of slump value is so selected to fit the requirements of both forms of the paving. The mixing procedure adopted was as described below. All the ingredients except superplasticizer were mixed in dry state for few seconds in a tilted drum type concrete mixer, then ¾ of total required water was added and the mix was further mixed for a couple of minutes. The superplasticer was mixed in remaining 1/4th water and added to the mix in the final stage of mixing. The mixture was mixed for another two to three minutes before evaluating its properties at fresh state.

For compression testing, 150 × 150 × 150-mm3 cubes and for flexural tensile strength prism specimens with dimensions 100 × 100 × 500-mm3 were prepared from all concrete mixes. All the specimens were demoulded after 24 hours of casting and curing in the steel mould. Thereafter, the demoulded specimens were marked for identifications and kept submerged in a curing tank till the age of testing. 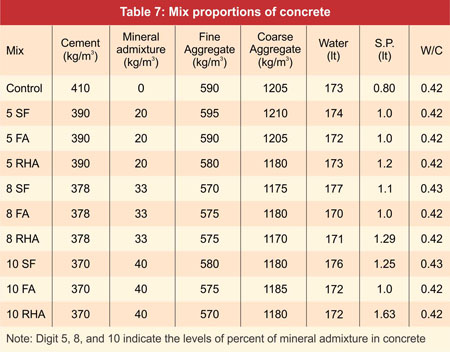 The results obtained on the fresh state properties i.e. slump, concrete temperature and concrete unit weight are presented in Table 8. The targeted slump was 75 ± 5 mm for all the concrete mixes. Additions of silica fume as well as rice husk ash slightly decreased the slump value in comparison of control concrete. Therefore, the same was brought within the range required by increasing the amount of more water reducing agent (Table 7). This indicates that addition of silica fume and rice husk ash decreases the slump of the concrete. However, in the case of FA concrete the slump value increased marginally. Based, on the results given on the slump values in Table 8 and the amount of super plasticizer required to maintain those value Table 7, it is obvious that replacement of cement by SF and RHA reduces the slump of the fresh concrete which is mainly due to increased fineness of the SF and RHA particles in comparison of cement particles.

The data on concrete temperature presented in Table 8 indicates that the replacement of cement by RH & silica fume is similar. In general, an insignificant effect on concrete temperature can be noticed. A close look, of the Table 8 indicates that the mineral admixed concrete shows higher unit weight than the controlled one, which is due to micro filling effect of the mineral admixture. However, it can be noticed that the increase in replacement levels have insignificant effect on unit weight of concrete containing mineral admixture, which may be due to the fact of close range of replacement, levels.

The most important mechanical properties of concrete for the use in pavement construction is flexural strength. In addition to it, the compressive strength of concretes was determined for their comparison. The results have been discussed in the following sections.

The compressive strength of concrete mixes was determined as per the standard procedure described IS: 51613 at 7 and 28 days. Average result obtained on triplicate specimens was used for the reporting. Figures 2-4 illustrate the development of compressive strength of concrete mixes containing 5%, 8% and 10% of mineral admixtures i.e. silica fume (SF), rice husk ash (RHA) and Class F flyash in comparison of controlled one, respectively. It is obvious from the Figure 2 that the concrete containing silica fume, out performs other concrete mixes including control one in term of compressive strength development. Similar trends for strength development can be observed in the cases of replacement levels of cement with mineral admixtures under nvestigation i.e. 8% and 10% (Figures 3-4). It can further be seen that concrete containing fly– ash (FA) develops least compressive strength. However, in the replacement levels used in the study, it shows strength nearly at par with control concrete. The insignificant reduction in strength of concrete containing flyash in comparison with control one may be due to the lower level of replacement of cement with flyash. 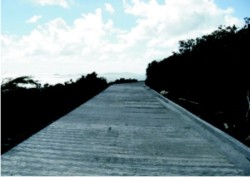 The following important conclusions can be drawn from this experimental study: