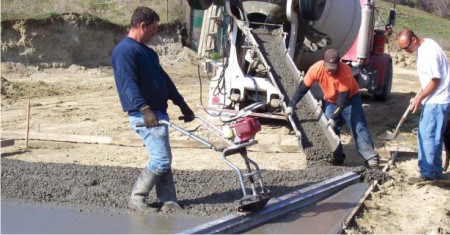 Concrete structures need repair and rehabilitation many a time as they get damaged due to excessive stresses due to unforeseen forces caused by man-made or natural disasters. But there are few situations in practice, where concrete is expected to show signs of damage such as cracks during its service period itself. If precautions are not taken while designing or constructing such concrete structures, they may also demand repair and rehabilitation work. However, with careful design and construction such situations can be avoided. Present paper enlists and recommends various prevention measures which should be incorporated while designing a concrete mix to be used for structural elements which will be subjected to high temperature exposure, thus causing damage during its design life.

Pozzolanic concretes are used extensively throughout the world; the oil, gas, nuclear and power industries are among the major users. The applications of such concretes are increasing day by day due to their superior structural performance, environmental friendliness, and energy-conserving implications [1]. Although the concrete in such structures is always provided with adequate insulation, nevertheless, it is difficult to inspect the insulation and there is always a possibility of its deterioration. Also, problems with the cooling system in nuclear power plants may lead to hazardous situations where the concrete gets overheated. The exposure of concrete to elevated temperatures has a direct effect on its compressive, tensile and flexural strength [2, 3]. One of the main reasons for loss of strength in concrete at elevated temperature is the formation of cracks between cement paste and aggregate because of thermal incompatibility between the two ingredients [3]. Present paper reports the results of a study on compressive strength of pozzolanic concrete as well as ordinary concrete after being heated to elevated temperature up to 2000C. Since cyclic temperature changes occur in nuclear reactors and can lead to further decrease in concrete strength [4], the experimental program is expanded to also include the effect of cyclic heating on the strength of concrete.

The effect of high temperature on the compressive strength of concrete has been thoroughly explored in the present study. The strength of ordinary and pozzolanic concretes incorpo– rating silica fume and ground granulated blast furnace slag at 2000C temperature for heating cycle ranging between 0 to 28 days are compared. For this purpose, different concrete mixes are obtained mixing blast furnace slag and silica fume with 43-Grade Ordinary Portland Cement (OPC). To start with, various tests are conducted on cement to determine its physical properties as per recommendations of IS: 4031-1999 and the test results are listed in Table 1.

While making concrete, water– cement ratio is maintained as 0.45 by weight and cement content as 396 kg/m3 in all the cases. Various concrete mixes are prepared by replacing Ordinary Portland Cement (OPC) 43-Grade with silica fume and ground granulated blast furnace slag (GGBFS) at a 5%, 10% and 20% by weight of cement. 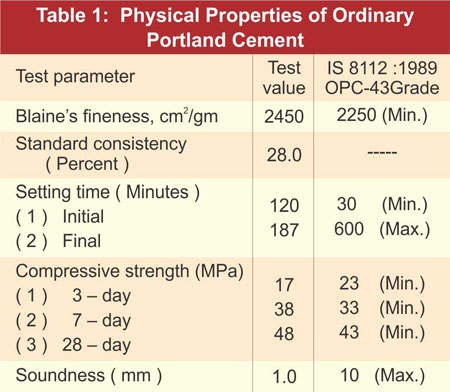 GGBFS is processed from granulated slag, a cementitious material that consists of same constituents, which are also present in cement. It has more than 90% glass content or calcium alumino silicates. The physical and chemical properties of GGBFS and micro-silica are given in Table 2.

The cube specimens of 150 mm size are cast in steel moulds in three layers and compacted on a vibrating table. A total of seventy–two cubes are prepared. The specimens are kept in the moulds for 24 hours, after which they are de-moulded and placed in a water curing tank for 28 days. The specimens are then dried and heated in an electric oven with a maximum temperature of 2000C for 7, 14, 21 and 28 heating cycles and tested under compression to failure after cooling. Each heating cycle consists of a heating period of 8 hours after the oven temperature reaches 2000C and subsequent cooling period of 12 hours as shown in Figure 1.

To understand the behavior of heated concrete specimens under varying conditions considered in the present investigation, the results obtained are represented in graphical form as given below. 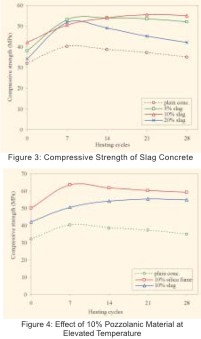 As in the case of silica fume concrete, ground granulated blast furnace slag (GGBFS) concrete also gives better result in comparison to ordinary concrete for all heating cycles as shown in Figure 3.

Comparison of Strength of Concrete 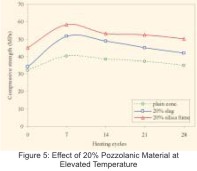 The following conclusions are drawn from the experimental investigation reported here in.