Concrete is a widely used building material. It consists of cement, aggregates (fine and coarse), water and super-plasticizer. The properties of concrete can be controlled by using different ratios of cement, water, and aggregates. These ratios can be worked out using different code provisions. Moreover, the properties like setting time, workability, air entrainment etc. can be modified with the use of super-plasticizers. The main objective of present study is to compare the compressive strengths obtained using IS and ACI methods of mix design with and without the use of super-plasticizer at various W/C ratio.

Concrete is a composite material consisting of cement, water, and aggregates. These ingredients can be mixed in different ratios to attain desired strengths. Though rough mix ratios for different strengths have been estimated such as for M20 (1:1.5:3), M25 (1:1:2) as per Gambhir [7]. But due to limited availability of materials and complex designs of structures, there’s a need for more accurate and precise mix proportions. Use of code provisions every time for calculating the mix proportion can be a tedious and exhausting process. Thus, dynamic program in excel was created for calculating mix proportions for different exposure conditions, aggregates size and properties desired.

The mix design provided by the codes i.e. Indian Standards [4] and ACI [2]) were carried out using standard materials and empirical tables and graphs. The difference in the results of mix design using different codes arises due to the source of materials and different moisture conditions. The literature review includes the application of ISI and ACI [2, 5-6, 8-10].

Cement is the primary material of concrete and has binding properties. OPC grade 43 conforming to IS 8112:2013 was used and tested according to IS 4031:1988. The physical properties of the cement used are given in Table 1.

Coarse aggregates form the major part of the mass of concrete. The physical properties of coarse aggregates were observed to be conforming to IS 383:1970 and are given in Table 2.

Fine aggregates fill the voids between the coarse aggregates and make the concrete mass sound. The physical properties fine aggregates were observed to be conforming to IS 383:1970 and are given in Table 3.

The design method adopted is in accordance with ACI 211.1-91. The flowchart in Figure 1 shows the algorithm followed by the excel sheet for calculating the mix proportions. 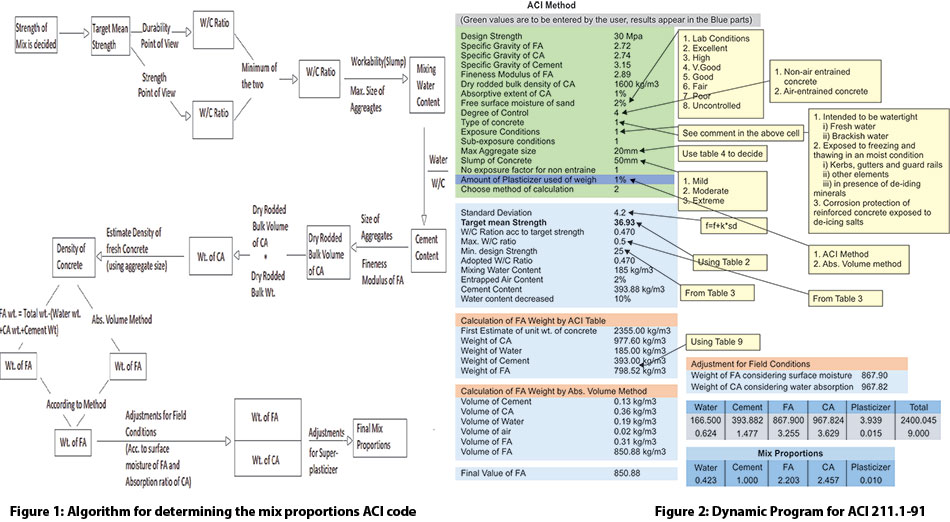 The inputs required for determining the mix proportions for a given strength according to ACI code are listed below:
Figure 2 shows the dynamic excel program with the inputs and mix proportions.

The design method adopted is in accordance with IS 10262:2009. The flowchart in Figure 3 shows the algorithm followed by the excel sheet for calculating the mix proportions.

The inputs required for determining the mix proportions for a given strength according to IS code are listed below:
Figure 4 shows the dynamic excel program with the inputs and mix proportions. 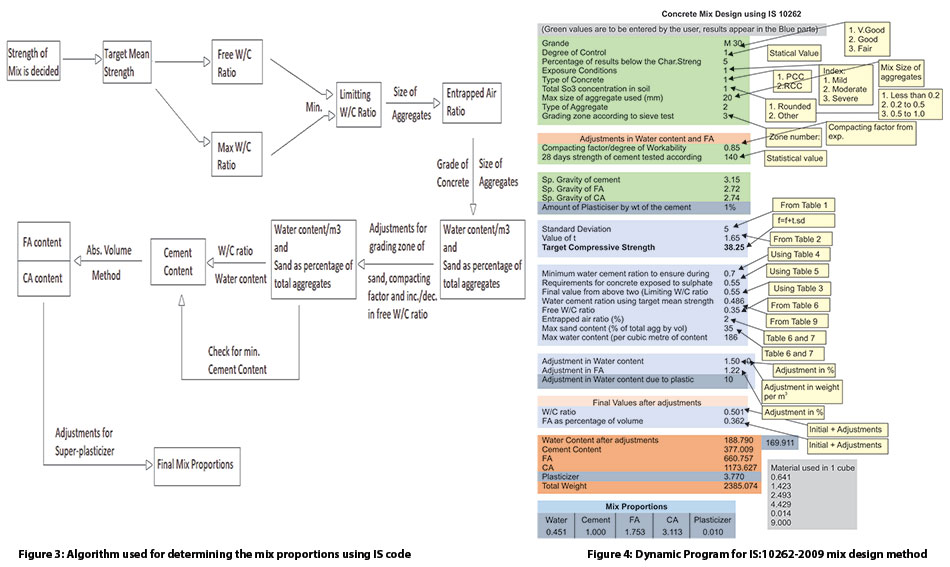 Figure 5 and Figure 6: graphical representation of test results
The compressive strength achieved after 7 days, 28 days were recorded and are shown in Table 6. The same results have been graphically represented with bar charts in figure 5 and figure 6.

Figure 7: Graphical Representation of Compressive Strength with age
Figure 7 shows that concrete has achieved its actual strength at the age of 28 days of casting. For M30, the target to be achieved within 7 days was taken to be 20 MPa and within 28 days is taken to be 30 MPa.

With the use of super-plasticizers, the strength is achieved earlier as compared to mix design not using Super-Plasticizers. Thus, the target was taken to be 25 MPa for 7 days and 35 MPa for 28 days. 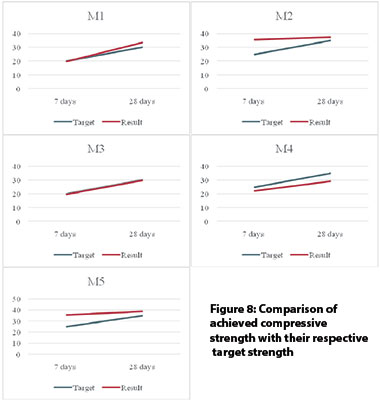 Figure 8 shows the comparison of the compressive strength results achieved with their respective targets. While M1 and M3 achieved the target strengths, M4 struggled to keep up with the target which gives a clear indication that presence of too much water content with plasticizer has an adverse effect on the results. Meanwhile, M2 and M5 showed satisfactory compressive strengths that too in early stages of tests advocating the use of super-plasticizers and clearly showing the benefits.

A cost analysis was done for all the five mix proportions and an excel program was made to compare the costs. The basic costs were taken from the DAR Civil (Delhi) 2016 for cement, coarse aggregates and sand. For super plasticizer, the cost incurred for buying the specific brand was taken. Table 7 shows the costs of constituents of concrete. Table 8 shows the cost of the mix designs per cubic meter of concrete. Figure 9 gives the graphical representation of costs of mix design of table 8. 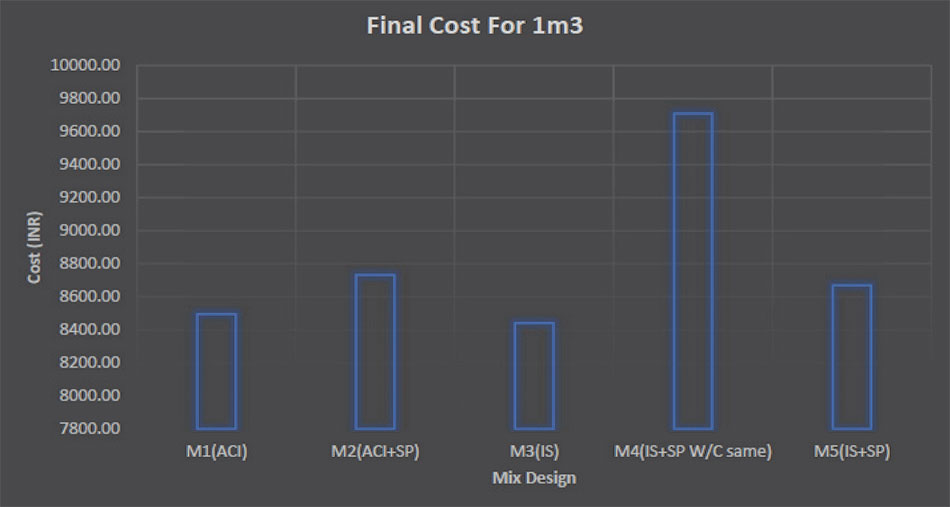 When the mix proportions without super-plasticizers are compared ACI (M1) gives better results than IS (M3) mix proportion with a very small compromise on cost. Thus, ACI should be preferred for mix design without plasticizer.

If the speed of construction is important then IS mix design with super-plasticizer should be chosen for better economy and results.