With the advent of new materials, there is a constant need for designers to find innovative ways to incorporate these materials into new applications. The field of civil engineering is currently at a cross roads of equal significance with development of new materials termed as High Performance Fiber Reinforced Cementitious Composites (HPFRCC). These materials with tensile performance magnitudes higher than Reinforced Concrete (R/ C), allow designers to create structures previously impossible due to limitations of minimum reinforcement, minimum clear cover or excessive cracking in R/C. The replacement of brittle concrete with an Engineered Cementitious Composite (ECC), which represents a class of HPFRCC, micro structurally tailored with strain hardening and multiple cracking properties, has shown to provide improved load-deformation characteristics in terms of reinforced composite tensile strength, deformation mode and energy absorption. This paper reports, investigation of response mechanism of composite moment resisting frame system with large energy dissipation capabilities. Plain cementitious matrix is used in frame specimens to estimate deformation behavior and formation of plastic hinges. Expected plastic hinge regions are properly detailed by steel reinforcement. Deformation mechanism of plain cementitious matrix suggested economic use of ECC by replacement with concrete in some areas. Load-displacement curves are plotted and compared for damage tolerance evaluation. Crack width is measured as a function of load for damage reduction evaluation and toughness index is found out for post peak performance evaluation. Compatibility of ECC with reinforcement and concrete in terms of deformation and strength is discussed.

In earthquake resistant design, the structural system performance requirements can be specified in terms of minimum ductility ratio, number of load cycles, sequence of application of load cycles and permissible reduction in strength at the end of loading. At the beam column connection level, the following performances are desirable:Desirable performance of the plastic hinge is not easy to translate directly into numerical quantities of materials property requirement. In general, however, it may be expected that the following properties of the concrete material in the plastic hinge should be advantageous:ECC when used with ordinary reinforcement detailing replacing the concrete at some key places, interact with reinforcement and concrete. Both, reinforcing steel and ECC can be considered as elastic-plastic material capable of sustaining deformation up to several percent strains. As a result, the two materials remain compatible in deformation even as steel yields. Compatible deformation implies that there is no shear lag between the steel and the ECC, resulting in a very low level of shear stress at their interface. As a result of low interfacial stress between steel and the ECC, the bond between ECC and reinforcement is not as critical as in normal R/C, since stress can be transmitted directly through the ECC via bridging fibers even after microcraking. In contrast, in R/C members the stress must be transferred via interface to the concrete away from the crack site. After concrete cracks in an R/C element, the concrete unloads elastically near the crack site, while the steel takes over the additional load shed by the concrete. This leads to incompatible deformation and high interface shear stress responsible for the commonly observed failure modes such as bond splitting and/or spalling of the concrete cover. ECC has excellent shear capacity. Under shear ECC develops multiple cracking with cracks aligned normal to the principal tensile direction. Because the tensile behavior of ECC is ductile, the shear response is correspondingly ductile. As a result, R/ ECC elements may need less or no conventional steel shear reinforcement. With tensile strain hardening and ultra high tensile strain capacity, ECC can sustain very large deformation without damage localization. When ECC structural element is loaded in flexure or shear beyond the elastic range, the inelastic deformation is associated with micro cracking with continued load carrying capacity across these cracks[3]. The tight crack width in ECC has advantageous implications on structural durability and on the minimization of repair needs subsequent to severe loading of an ECC member. ECC can eliminate premature delamination or surface spalling in an ECC/concrete combination.

In the present work, the effects of cementitious composite ductility on the steel reinforced behavior are experimentally investigated and contrasted to the unreinforced composite. Interaction between ECC and concrete is observed and possibility of replacing ECC with concrete is explored. Tight crack width control in ECC is examined. L-type plane frame and portal frame specimens are used for the experimental investigation.

Recron 3S brand synthetic fibers of triangular cross section produced by Reliance Industries were used with cementitious matrix. Fiber volume fraction of 4% was used which was found as optimum fiber volume fraction by pilot tests. Kamal brand 53 grade OPC, 300 m passing silica sand, 2% dose of concrete super– plasticizer of conplast SP430 brand with w/c ratio as 0.35 and sand/cement ratio as 0.5 were used for the preparation of samples of ECC in the present experimental investigation. In addition, Kamal brand 53 grade OPC, silica sand confirming to zone III, 12.5 mm size coarse aggregates with w/c ratio of 0.35 and 0.5% dose of superplasticizer were used to produce concrete for use in combination with ECC in C-ECC specimens. Mix proportion for concrete used was 1:1.295:2.407. Mild steel reinforcement having yield strength of 250 N/mm2 was used in R-ECC specimen. 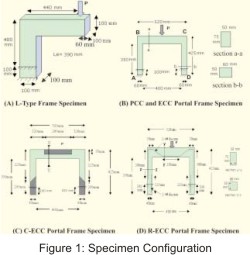 For the preparation of specimens, the ingredients in required proportion were mixed in Hobart type mixer machine. Flow table test was performed to satisfy workability criteria in fresh state. After filling the mould with the matrix, it was compacted and demoulded after 24 hours. All the specimens were kept in curing tank for 28 days at room temperature. After putting proper identification mark, specimens were fixed into prefabricated experimental set up on MTS machine. Basic Testware available on computer supervised controller was used to conduct the test. All the specimens were tested in flexure at a displacement control rate of 0.005 mm/sec. Load and displacement at the first crack and at ultimate load were recorded during the test. Loaddisplacement curves were plotted and data were automatically recorded using basic Testware data acquisition facility. Crack width was measured for the first initiated crack during the test with the help of travelling microscope having least count of 0.01 mm. Test setups for plane frame and portal frame specimens are shown in Figure 2.

The authors would like to thank Reliance Industries Ltd., Grasim Industries Ltd., and Fosroc Chemicals Ltd. for supporting this research work by providing Recron 3s fibers, Kamal brand 53 Grade OPC cement and Conplast Super Plasticizer respectively. Thanks are also due to the funding agency DST, New Delhi for providing a grant of Rs. 25.6 Lakhs, under FIST Project, to Prof. S. C. Patodi for upgrading the testing facilities used in this investigation.