Modern structural engineering tends to progress toward more economical structures through gradually improved methods of design and the use of higher strength materials. Such developments are particularly important in the field of reinforced concrete; the limiting features of ordinary reinforced concrete have been largely over come by the development of prestressed concrete. A Prestressed concrete member can be defined as one in which there have been introduced internal stresses of such magnitude and distribution that the stresses resulting from the given external loading are counteracted to a desired degree. Concrete is basically a compressive material. Prestress applies a precompression to the member that reduces or eliminates undesirable tensile stresses that would otherwise be present. Cracking under service loads can be minimized or even avoided entirely. Deflections may be limited to an acceptable value.

PSC beams are designed using limit state theory using IS-1343 (1984). All beams have same cross-section of 150 x 200 mm with effective length of 3 m. Requirement of reinforcement is evaluated by applying prestressing force of 85.47 kN in case of all the beams. Six high tensile 4mm Φ prestressing wires and 8mm Φ @ 300 c/c stirrups are used as lateral reinforcement in beams. Two no of 10mm Φ bar at top and bottom respectively is used as non prestressing reinforcement. Specimen detailing is shown in Figure 1. 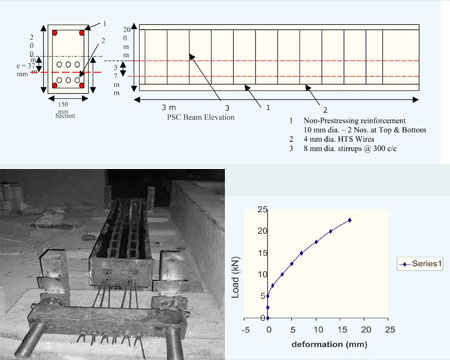 Prestressing system exclusively developed for this research work is shown in Figure 2, Screw jack is provided for prestresing of HTS wire and for fixing of HTS wires, Wire locking barrel is sed. The screw jack along with moving anchor block is fixed to the jacking end side (stretching end). The steel plate mould is fabricated and put into place with bolted end plates having holes for pretensioning wires to pass through.

Selected proportion for M45 grade concrete mix is cement: sand: grit: kapchi: water 1:1.36:2.21:0.55:0.37. 4 mm HTS wires are used for prestressing Tension test for the wire is performed on UTM and its ultimate strength is found 2350 N/mm2. Figure 3 shows the load deformation relationship for HTS wires. GFRP laminate is used for wrapping on beams.

Four PSC beams are tested up to first cracking. They are then strengthened using Glass Fiber Reinforced Polymer (GFRP) laminates and after tested upto failure. Four PSC control beams immediately after the required curing and strengthened using GFRP laminates are then tested. Different types of strengthening arrangement are provided based upon different span loadings. Figure 3 shows the different type of strengthening arrangements provided. 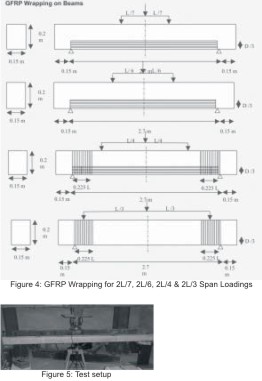 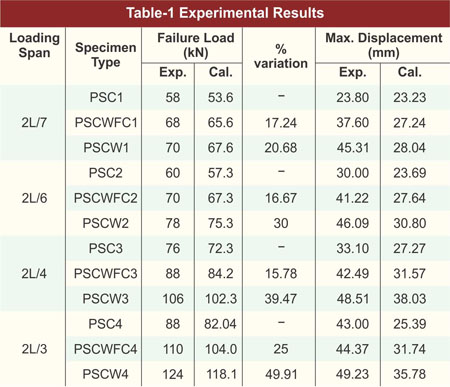 Maximum displacements at the time of failure load in case of all the specimens are given in Table 1. These are observed at the centre of the beams during the testing by using LVDT (Linear variable displacement transducer). Figures 7 a), 7 b), 7 c) & 7 d) represent the load– displacement relationship for all the beams tested at 2L/7, 2L/6, 2L/4 and 2L/ 3 loading spans respectively. From Figures. 7 a) to 7 d), it can be seen that as the span loading increases, the tendency of the beams to deflect under lesser loading decreases. This is primarily due to the reduction in the moment caused by the point loads. It is apparently shown by Figures that the load carrying capacity of the beam increases as the loading span increases. But actually, it is the reduction in the moment that causes the beam to deflect lesser as the span increases. Because of the increase in loading span, the load required inducing same amount of moment increases, and hence for the same loading the deflection observed is lesser than the load for the smaller loading span. 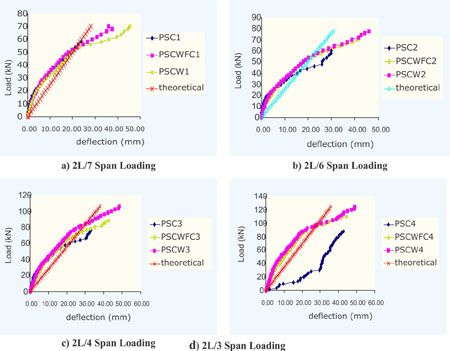 Catastrophic failure i.e. failure with large sound is observed in wrapped beams during the experiments due to the sudden failure of the fibers in tension. Specimens also fail due to the de-bonding of the fibers from the concrete surface. Figures . 8 a), 8 b), 8 c), & 8 d) show mechanism behind failure of the PSC beam wrapped after first crack. Here load is given in the form of push, due to which bottom fibers are in tension. Due to this, bottom fibers of the beam get de-bonded in tension as shown in Figures. 8 a) & 8 b) respectively, as the tension carrying capacity of the wrapping system is more than its bonding capacity.