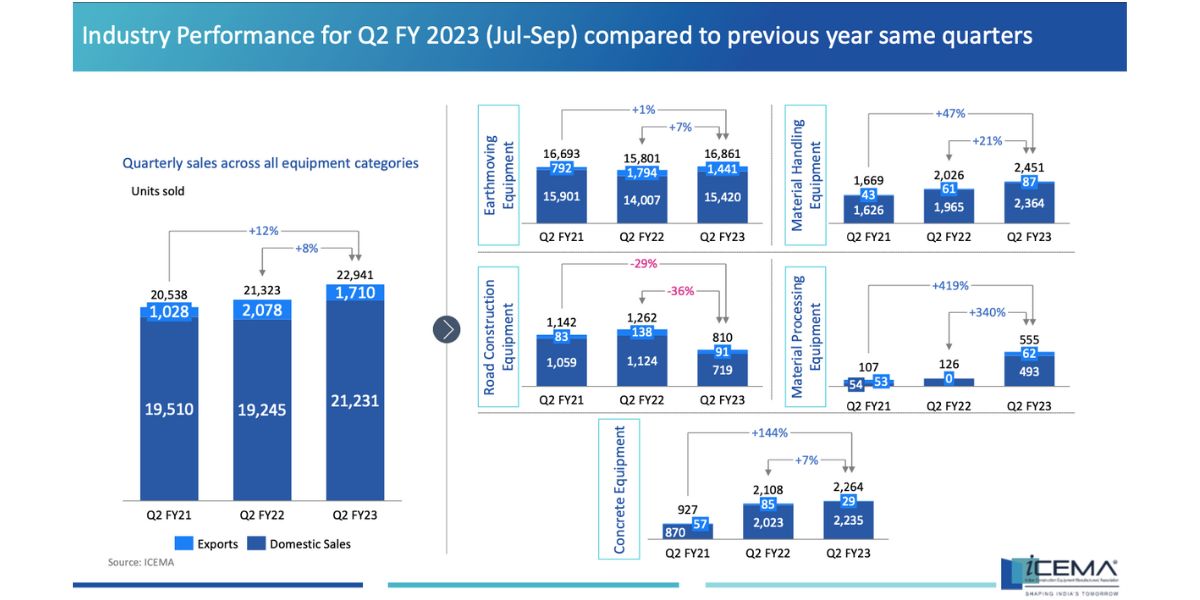 “Though industry’s performance has been better in the current financial year so far, worries continue to remain on the road construction front, which is the single largest end-user segment for us”, said Dimitrov Krishnan, President ICEMA and MD Volvo CE India Pvt Ltd. Despite the subdued performance of the road construction equipment segment, the industry sold an aggregate of 22,941 units during July to September this year, as compared to 21,323 units sold during the same period of last year.

On a quarter-on-quarter basis, the sales in the second quarter remained around the same level as of the first quarter. This is primarily because of the lower month-on-month sales growth recorded during July and August this year. The industry witnessed a strong rebound in September, with sales recording a 45% growth over August 2022. The growth was mainly driven by Earthmoving segment, accounting for nearly three-fourth of the total sales, which witnessed 46% jump in sales during September over August this year, followed by concrete equipment witnessing 62% growth and 33% in material handling equipment. The CE industry sold 4,036 units of Backhoe Loaders & 2632 units of Crawler Excavators in September 2022, an increase of 52% and 43% YoY respectively.

Some key factors driving equipment sales in September 2022 included slowdown in monsoon activity during the month which helped increase construction activities in the country as well as an increase in State level capex on infrastructure. Further, Sep 2022 also witnessed an increase in National Highway construction. A total of 647km of National Highways were constructed during the month, an increase of 38% YoY. However, the pace of Highway Construction in H1, FY23 still remains below 20km/day, which is a concern.

V G Sakthikumar, Convener, ICEMA Industry Analysis and Insights Panel and MD, Schwing Stetter India Pvt Ltd said that, “we are happy to see the industry gathering momentum in September, with all segments having registered good growth. Both domestic as well as exports markets have performed better in September and the industry is optimistic about this growth to continue through the third quarter given the festive season ahead, however some concerns remain due to sudden spurt in rainfall during the first week of October.”