Wacker Neuson being a pioneer manufacturer of equipment in the field of concrete and soil compaction will be looking forward to showcase its various Strategic Business Fields during the bC India 2011. "The company will demonstrate to all visitors their latest state-of-the-art technology that is prevalent in the smaller lines of construction equipment", confirmed Mr. Senarat Jayasekera, Managing Director, adding "We will target key customers in the construction industry who specialize in professional performance in all operations with the aim of increased efficiency". In keeping with the organization's strategic aim of supporting customers throughout the country, Wacker Neuson will be actively seeking additional dealers in strategic locations during this construction equipment fair.

Earlier this year, Wacker Neuson has introduced a series of concrete (shutter) vibrators in India to suit various formworks that are becoming increasingly popular in India. The formwork in conjunction with the Wacker Neuson shutter vibrators assure reduced construction time especially for multi-storey structures. "Additionally, we are demonstrating a new series of reversible vibratory plates that assure contractors the highest compaction densities with the minimum number of passes" stressed Mr. Jayasekera.

On the company's expectation from this show, Mr. Jayasekera said, "Wacker Neuson expects maximum exposure of its products and services to a concentration of highly professional customers during the bC India 2011. Actual demonstrations of our products during the trade fair will allow potential customers to get a "feel" for our machines and to observe for themselves the many value added features that assure higher performance and increased efficiency. bC India will also enable us to showcase ourselves to potential dealers seeking to represent us in selected regions. Last but not least the exhibition will enable Wacker Neuson to get a feel of the market and clientele in order to strategize our marketing policies for the medium and long term future". 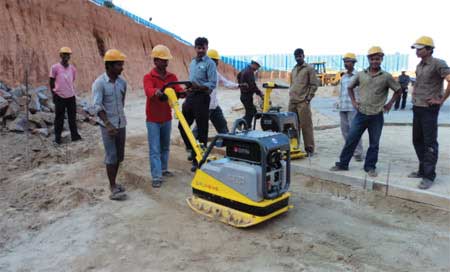 Wacker Neuson Equipment Pvt. Ltd. is the solely owned subsidiary of the 163 year old Wacker Neuson SE in Munich, Germany. Wacker Neuson specializes in the manufacture of Concrete Vibrators, Concrete Screeds, Trowels, Vibratory Rammers, Plate Compactors, Rollers, Concrete Hammers, Road cutters and Light Towers which are differentiated under the business fields of Concrete Compaction, Soil Compaction, Demolition and Utilities. The group has been a pioneer in the arena of concrete and soil compaction in enclosed areas having invented the vibratory rammer over 80 years ago and Concrete Vibrators with built-in inverters.

The Wacker Neuson HQ in India is located in Bangalore with sales and technical personnel located in various regions of the country. The equipment is sold, serviced and supported in the country by dealers.