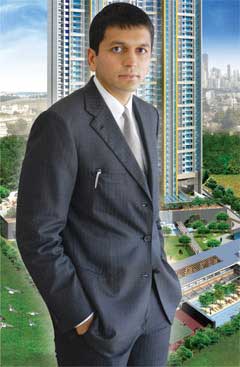 "Going way ahead we have recently announced the launch of 117-storey the tallest residential tower named as 'World One' in Mumbai. This is the housing project for which registration of flats has already commenced with an investment of Rs. 2,000 crore and is expected to be completed by 2014 says Mr. Abhisheck Lodha, Managing Director, Lodha Group during an interaction with Maria R.
Lodha Group is Mumbai's premier real estate developer providing comprehensive residential and office space solutions across real estate categories and diverse consumer segments since 1980. The group is continuously striving to exceed the expectations of customers through innovative world-class solutions leading to several innovative, first's to its credit. Established in 1980, Lodha group provides residential and office space solutions across all real estate categories - from luxury garden residences in South Mumbai to large integrated townships in the suburbs, from thoughtfully designed office environments to private villa retreats. The group has been responsive to changing market situations and has dynamically realigned its project portfolio anticipating demand-supply mismatches in the market especially during the recessionary times. To explore the untapped potential in the 'affordable segment', Lodha have created an entirely new residential category - Mid-Income Luxury. A new sub-brand, CASA by Lodha was created for this category, with essential quality and luxury endorsement providing right sized and, right priced products in Mumbai’s suburban locations.

Elaborating on this project Mr. Abhisheck said, the integrated planning of Casa Bella, Mumbai's largest single phase township development has been selected by the United Nations as one of the Good Practices for 2009 which is deemed to have made outstanding contribution to improve the quality of life in their cities and communities. The launch of the Casa brand was met with huge success and a large number of apartments have been sold in the last few months. The group has strong systems and process orientation, including research and benchmarking and uses advanced technologies to ensure optimized solutions.

Talking about innumerable innovative firsts to their credit he explained, the main motto of our group is to continuously strive to exceed the expectations of customers through innovative world-class solutions which lead to several innovative, first's to its credit. These include Lodha Bellissimo, Mumbai's first 'By invitation only' project which is the only Indian residential project amongst the top landscapes in the world, Lodha Luxuria, Mumbai's first 'Fully Automated Township' and Lodha Aqua, Mumbai's first water inspired township.

In addition, our group is the first to believe in using brand as a differentiator and has developed itself as a pioneer of branded realty, delivering consistent brand experiences across customer touch-points.

The group has extended this philosophy to office spaces as well, where it was one of the first in India to introduce the concept of branded office spaces through its unique offerings including signature offices catering to front office requirements of large corporates at Lodha Excelus; the ultimate IT destination for large back office needs at iThink by Lodha; and the recently launched signature boutique offices, targeted specifically at mid-sized businesses with Lodha Supremus.

Going way ahead we have recently announced the launch of 117-storey project, the tallest residential tower named as 'World One' in Mumbai. This is the housing project for which registration of flats has already commenced with an investment of Rs. 2,000 crore and is expected to be completed by 2014, he revealed.

Christened as World One, the tower will be higher than some of the iconic global landmarks including Sears Tower in Chicago, Jin Mao Building in Shanghai and Empire State building in New York he said. The proposed tower is coming up on the 17 acre plot of the defunct Shrinivas Mill in Lower Parel in Central Mumbai, which the builder had bought nearly five years ago. It will house three and four BHKs, lavish villas with private pools and some super luxurious duplex flats. We believe in Leadership through Innovation and have time and again set new benchmarks for the real estate industry with a series of 'firsts' to its credit, he said. 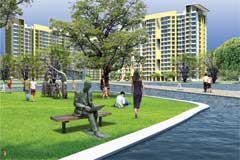 Dwelling on their Brand building and Brand management system which has helped it to stand among the biggies in the real estate market, Mr. Abhisheck said, Lodha collaborates with exemplary professionals and leading suppliers in the industry to translate our blueprints into tangible masterful landmarks and to deliver the finest in luxury, architectural design, home automations, fittings and finishes, landscaping and lifestyle amenities. We believe that an important aspect of a structured marketing team is brand management. The Lodha brand is built through a powerful, united branding strategy comprising various initiatives. A scientific approach to nomenclature and positioning which is in line with the value proposition of a project allows them to create distinctive branding and advertising for their projects.

The group's strong brand and execution capabilities have attracted the best financial investors from across the globe. According to the JP Morgan Property Report 2008, Lodha Group was ranked second in the list of most sought after for PE investment in the realty sector. Also selected as one of India's top 10 builders, the group has consistently delivered luxury lifestyles through innovative solutions, not just by building structures but by building better lives.

Sharing its experience of the slowdown and on its recovery he revealed, the global economic downturn sobered the euphoria that was "real estate". This sector since, has seen a rebound in the last quarter of 2009. Both residential as well as commercial real estate sales are on the rise. It also brought Affordable housing, which was always at the back of the mind of most developers, to the forefront. Lodha was one of the first developers to predict decreasing affordability and predict its impact on sales. Consequently, we recognized opportunities in mid income housing and took active steps towards the creation of our sub brand CASA by Lodha which marries our values of luxury as well affordability and has created a segment within mid income housing called mid income luxury. Despite the challenging market condition, CASA has witnessed a positive response. 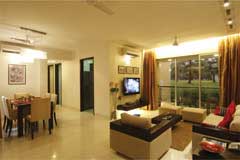 Giving an overview of the current market situation and his expectation from this business in the next two-three years he said, as per the 2007 report by Mackenzie based on the census data, Mumbai needs a little over 2 lakh homes every year. It is the single largest urban conglomerate in terms of population today – twenty– two million people live in the city. The general trend is that demand is more than supply and prices will keep growing every year. The only solution is that we need to make the supply come in line with demand. That can be done vertically by building a lot, but that puts a lot of pressure on the infrastructure, or it can be done horizontally, by expanding out of the city and building townships. But the whole point is that Mumbai's real estate will become more affordable when supply meets demand and we are far away from that.

We need to have a city that is pleasant to live in and affordable. As a city we need to ensure that we are able to provide more than we are already supplying, it could be through regulation, due to our geography.

The prices in the city center will be inevitably high. But what they have done in most of the cities like New York and Tokyo is that they have provided for connectivity so that people can live outside the city at affordable prices and still travel to the city, very easily. In most western countries people move to the suburbs for a better quality of life, but in India people move to the suburbs for a better home. That is the paradigm that we need to change.

Given India's economic growth and the demographics of the young educated society, the future of real estate industry is very sound. However, the government will have to work with the industry to ensure housing for all by improving the availability of infrastructure and by easing regulations. The government needs to develop infrastructure faster so that more areas become accessible and prices will remain under control, he concluded.