India’s focus on its ambitious infrastructure development is the mainstay of its construction equipment industry, and will be a major driver in current and future demand for machinery and related services. Very importantly, there is a growing presence of global manufacturers that are establishing state-of-the-art production facilities in the country; these companies, together with domestic OEMs, are developing ranges of equipment that focus on meeting the increasingly sophisticated demands of a wide variety of end-users. These moves will certainly help the construction equipment industry to meet the challenges of the future. But there are still concerns about the long term, partly as result of the lack of a robust, decisive and comprehensive policy that is strictly adhered to by the relevant authorities. ‘There is a vital need to have a stable policy regime’, commented David Phillips, Managing Director of the UK-based consultancy Off-Highway Research, during his interaction with S.K. Khanna on a recent visitto New Delhi.

Off-Highway Research is a management consultancy that specialises in the research and analysis of international construction and agricultural equipment markets, and is the largest of its kind in the world. It offers a unique level of international research expertise to the construction, earthmoving, mining, industrial, and agricultural equipment industries. With an office in New Delhi, the company analyses and monitors the Indian construction equipment industry through a range of research publications and databases.

Giving an overview of the world construction equipment industry, Mr. Phillips said that global sales, which had been growing since 2003 and exceeded 1,000,000 units for the first time in 2007, was badly depressed by the global financial crisis that hit at the end of 2008. The turmoil that followed reduced demand to about 600,000 units in 2009, but by 2011 sales had recovered to around 830,000 units. In 2007 global sales exceeded $100 billion, compared with around $83 billion last year. The developed markets of Europe and US are still suffering badly though, and they are still running at 50% below of their peak levels. Although they are now growing slowly, these traditionally strong markets, which together accounted for 50% of world demand as recently as 2007, are not expected to fully recover their former dominance. As a result all international manufacturers are increasingly becoming dependent on growth in emerging economies such as China, India, Russia and Brazil, where the focus is on infrastructure development. China, and to a lesser extent India, will be key markets for all of them for many decades to come. 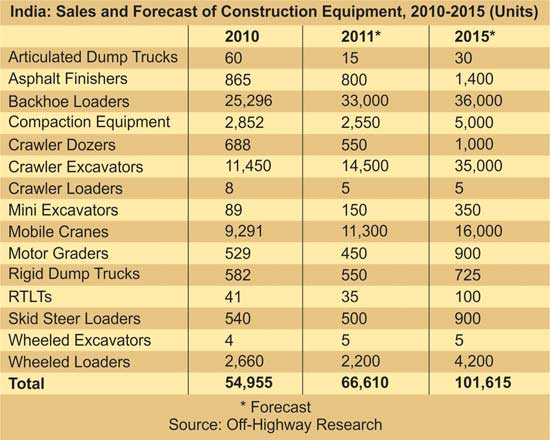 So far as India is concerned, construction equipment demand is set on a long term course of robust growth, and Off-Highway Research forecasts the market to grow from 55,000 units in 2010 to over 100,000 units by 2015 with a CAGR of 13.1%. In value terms, the market is expected to grow from US$3.9 billion to US$6.9 billion during the same period. A large number of the leading international construction equipment manufacturers are increasingly focusing their attentions on India, and are very keen to enter the market. This is being done either through subsidiary companies or by setting up joint ventures with local partners to capitalise on the very significant business potential offered by the booming Indian infrastructure sector.

The structure of the Indian market is changing significantly, with end-users becoming increasingly aware of the latest technology trends, and the best global practices regarding customer support. Buyers today are less sensitive to price: in the past, price was the determining factor in most purchasing decisions, but customers are now prioritising the concept of achieving the best value for money, and as a result profitability, over the entire life of a machine. Customers today demand excellent after-sales support irrespective of the initial purchase price, and are also increasingly evaluating competitive offers in terms of technology, productivity, reliability, maintenance costs, support packages and delivery times that are being offered. One need not be too worried about low priced equipment being offered in the market, as the competition is becoming more intense with an ever increasing number of suppliers, and market forces will result in the industry finding its own levels of the price to quality ratio.

Discussing the Indian backhoe loader market, Mr. Phillips maintains that it would remain the most popular type of equipment sold in the country for some time to come, but already a change in the structure of demand can be seen. Backhoe loader sales have been growing rapidly since 2000 (except for a dip during 2008-2009), and the market is expected to have exceeded 33,000 units in 2011. While it will doubtless continue to remain the most popular equipment type amongst plant hirers and small contractors on account of its versatility and mobility, it is expected to be increasingly replaced by more efficient and productive machines, such as crawler excavators and wheeled loaders on large infrastructure projects. Therefore, the future growth rate of the backhoe loader industry may decline, although it may well see increasing applications in rural areas which will sustain its strong market presence, feels Mr. Phillips.

Other topicslike remanufac- turing, the growth of imported second hand machinery,and low business in rental equipment were also discussed in the meeting between Off-Highway Research and NBM&CW. Participating in the discussion onremanufacturing, Mr. Samir Bansal, General Manager, Off-Highway Research, India, was of the opinion that component remanufacturing per seshould not be a concern. ‘It is a time tested concept that offers an economical solution for high end and other sophisticated products to reduce maintenance costs, without compromising on performance and reliability. The impression that it could lead to the dumping of second-hand products in the market is not supported by the facts’. However, industry concerns aboutimports of used equipment and machinery call for a more proactive investigation of areas such as declaration of age,safety and structural integrity of the equipment, emissions standard compliance and the invoicing of assets, all of which require a fresh assessment.

Commenting on the low penetration of rental equipment in the country, Mr. Bansal stated that the rental business has good penetration in the earthmoving, compaction and lifting sectors. However, unlike the more developed countries, a major portion of the equipment rental business in India is unorganised and fragmented, and that financing of equipment is still a problem for many new entrants to the sector on account of high interest rates and margin money requirements. There is also a need to create an enabling environmentfor the rental business, such as smooth intra/inter-state movement, uniform equipment classification in all states, and taxation. Indeed, the rental business suffers greatly from the lack of clarity on policy and regulatory framework, both issues that need to be addressed to ensure the future health of the Indian construction equipment industry, and of the construction industry itself.

Summing up the discussion on an optimistic note, Mr. Phillips said that infrastructure development will be at the heart of the construction equipment industry’s long term growth in India. All global manufacturers, and their component supply chains, are unanimous in their belief that the Indian market offers tremendous opportunities to all participants, and that the industry is set to grow exponentially over the long term.