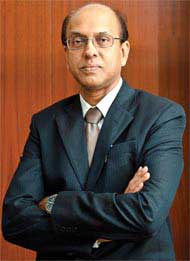 Coming on board as the new CEO, Continental Enginee- ring Corporation (CEC) India operation and the Managing Director, CEC International Corporation India Pvt Ltd, Mr. Sunil Shinde at the outset of this discussion made his business growth agenda to be pursued very clearly. "Sustainable Growth in specific segments "It is a growth-oriented business agenda focused on expansion of our business in the Indian infrastructure market, leveraging on our core technical competence to improve country's physical infrastructure. Since 2006, the company has been actively working with impor- tant government agencies on key infrastructure projects and has earned good credentials. Our aim is to become a leading India-based civil engineering construction company dedicated to contributing civil engineering projects that support infrastructure development in India. We have already made investment to have large inventory of modern and sophisticate equipments and machinery such as Tunnel Boring Machines readily available for deployment into infrastructure project stream. The company's long-term vision is to build a sustainable and growing operation in India," says Sunil Shinde in his interaction with S.K Khanna his very first interaction with any Construction Journal in the country.

Mr. Shinde is widely acknowledged leader of the construction industry in India. Prior to joining the new company, he has held important positions in country's leading construction companies, such as L&T-ECC Construction group, Hindustan Construction Company, Tata Realty and Infrastructure, and Welspun Projects Ltd, excelling all the way. His presence in the new company should augur well in promoting the business operations and usher a new work culture to take company's business to its next level of performance.

His induction into CEC India operation is part of CEC group's important strategic move in having a long-term investment in India. For CEC, India is an integral part of CEC global growth strategy.

CEC—Continental Engineering Corporation, a member of Continental Holdings , is Taiwan's most prominent contractor and developer engaged in construction and infrastructure development work. Over the years, it has built landmark structures, and factory installations, power plants, highways, tunnels, bridges and mass-transit systems not only in Taiwan but also across the world, including some in the US through its subsidiary company American Bridge. The group is keen to replicate the same developments in Indian infrastructure space through its Indian subsidiary.

The other jobs related to construction of part of the 8 lane, access–controlled expressway – Hyderabad City Outer Ring Road, including construction of flyovers and two major bridges. The company was also involved in construction of 59.72 km— Rajasthan East-West Corridors.

All these projects were executed well on time, delivering quality work expected from a world-class construction company giving the company a further appetite for undertaking more such projects.

With initial euphoria waning out in the construction of roads and highways sector and a slowdown setting in, Mr. Shinde seemed to be very much concerned about it stating that at both fronts— construction of new roads and highway and its resultant business—there is a pressure which needs to be eased to facilitate the sector to regain its earlier momentum. There is much more to be constructed in roads and highways as these works add to the growth of economy with multiple spin off benefits. Creating an enabling equitable business milieu is the need of the hour to rehabilitate the sector for its future well being and growth so as to attract new players, domestic as well as those from the overseas. It therefore enjoins upon all the stakeholders to work for that in sharp contrast to earlier practices so that the sector gets a fresh kick start. CEC is well poised to be a part of this endeavor.

Mr. Shinde ended the discussion on an optimistic mode stating that CEC has now established itself as a serious player in underground MRTS works having capabilities to implement tough projects in different strata, fully committed to complete those with stringent HSE policies. It has earned reputation of being a fair partner. Though in recent past, Indian construction industry is going through rough weather due to various factors, the scenario will change in due course and overall growth forecast for India Infrastructure looks positive. If we take into consideration various figures of investment for next 4 years, even the moderate forecast is quite significant for a decent growth. It is quite certain that major investment will take place in power and transportation sectorsof our interest.

Elaborating it further he said, "we will be focusing on areas of our core competence and expand our activities in related fields gradually. With the announcement of MRTS projects in many of the cities and proposals for high speed corridors moving ahead, with the track record and credentials we have, achieving moderate growth should be possible. We would like to achieve sustainable growth by adopting collaborative approach with our partners, sub contractors, consultants as well as clients. We firmly believe that it will result into significant gains for the stakeholders if they share the risks and rewards. Having been associated with the 1st project in India where the Australian Alliance concept was adopted, I believe that the teams can outperform with such approach."