Focuses on the Sales of Construction Equipment 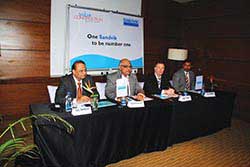 The Indian arm of Sandvik, a Swedish construction equipment manufacturing major, will generate lion share of its revenue from the increased sales of construction equipment in India and has targeted to generate asale revenue worth Rs. 7000 crore by 2015, says Raghavan Ramaswamy, President, Sandvik Construction Asia, in a media and customers’ representatives’ interaction meet recently held in Pune. Reports P. P. Basistha

The President of Sandvik Construction in India was accompanied by other senior officials including Ajay Sambrani, Managing Director Sandvik Asia Pvt Limited, Atul Inamdar, General Manager-Assembly Centre and Andy Taylor, Acting President Sandvik Construction Global. They were unanimous in mentioning that Sandvik India has set a target to achieve revenue worth Rs. 7000 crore by 2015 and that a substantial portion of the revenue that would flow to its kitty would be generated from the construction equipment business arm. The company is targeting a revenue of approx Rs. 2800 crores during 2012, which is higher than the Rs. 2200 crores it earned during 2011. Though not quantifying the amount of revenue that was targeted to be generated through the construction equipment business, they said that despite market slowdown, the company recorded decent growth of 12-15% from construction equipment including allied and supporting business in 2012 and has targeted to achieve approx 20% growth during 2013 when the business will mostly be supported through growth in quarry and aggregates led by planned expansion of road development projects including cement and hydro power sector across the country.

Value in Sales
According to the officials, targeted growth would be largely materialized through slew of initiatives including by adding value in sales, essentially through the introduction of newer products backed by better research and development, customer support and focus on after market business.

Elaborating on the details of the business plan for attaining the colossal targeted growth, Mr. Sambrani, told NBM&CW that effective research and development support for newer products would be one of the key initiatives to support business growth. "Sandvik group has identified India as one of its premium centres for carrying products development to cater the requirements of construction and mining sectors globally. With our presence in India in the past 52 years, we have been able to make sufficient knowledge base and this would be synthesized with our global R&D input to create suitable products for Indian market."

Though the company will refrain from introducing products specifically customized to the requirements of crushing and screening sector in India, Raghavan added that the products would be tailor-made to job site requirements. "Sandvik is better known as a total solutions provider, we do not supply standard products to quarries, instead products are crafted to suit the specific job site requirements post bagging the orders from the client both for the wheeled and stationery plants. The aspects like topography of the job site, geological specification and finally the aggregates requirements are taken into account for designing the plant, says Mr. Raghavan.

Insisting that bulk of the requirement of Indian construction sector comprises 200-300 ton per hour plants (tph), however, with bigger job sizes, mainly from the road construction sector, there is a transitional shift towards higher capacity plants in the range of 500-600 tph at par with global markets. Though refraining from quantifying the market size of higher capacity crushers in Indian market or the demand sectors looking for the enhanced capacity units, he says, "With our ability to produce wide capacity of plants, we would be able to address various emerging market requirements." Sandvik has recently launched its ‘Vibro Cone’ 1000 tph series of cone crushers.

Reiterating that competition is well likely to be stiffer for static and tyre mounted wheeled units from tracked segment. This is because most of the tracked plant manufacturers are diverting their attention to the aggregate sector largely owing to slowdown in mining sector. 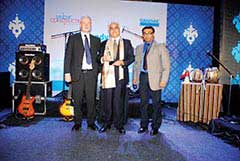 The introduction of newer products is expected to strengthen business for Sandvik, however, it will be important for the company to consolidate its presence, in order to retain its foothold amidst slowdown led by the fall out of competition. Currently, he adds, "At par with looking for newer business opportunities, customers’ focus will be maintained by the company for the new and existing ventures. In previous years, we carried out organizational restructuring by creating independent five verticals in accordance with our overall business structure, with construction business being one of them. The restructuring was carried to maintain better customer focus. Strengthened customer attention will be one of our key growth strategies."

In his concluding remarks, Mr. Raghavan said, better customer training as part of product support would continue to be our cornerstone aimed at better support and to expand market network, Sandvik would adopt a double-pronged strategy of appointing dealers as well as promoting direct sales based on requirements. The aftermarket business will contribute to Sandvik’s sales in a big way.

In fact, Sandvik has planned huge capital investment in coming years to strengthen its manufacturing and service network in India where it has five business divisions which consist of the construction equipment and tooling division in Pune, rock tools division in Hyderabad and heating wire division in Hosur, stainless steel production and seamless tube in Ahmedabad, tungsten and recycling plant in Chiplun.