Excon : A Unique Confluence of Technology and Business

The meticulous planning and its effective implementations has gone into the organization of the 6th International Construction Equipment and Construction Technology Trade Fair -Excon 2011, the South East Asia’s largest construction equipment exhibition to be held at BIEC Complex Bengaluru during 23-27 November 2011. The exhibition is all set to showcase the widest varieties of construction equipment, technology and products with specific focus on efficiency, productivity, environment, and safety. It is one of the biggest opportunities to offer customers on-site equipment experience of the latest technology, products and services, said Mr. Vipin Sondhi, Chairman Excon in his conversation with S.A.Faridi and S.K.Khanna before the start of this mega event.

Coinciding with Excon 2011, a two-day conference on Construction Equipment will be held on 26 November 2011, being organized jointly by the Indian Earthmoving & Construction Industry Association Ltd (IECIAL) and Confederation of Indian Industry (CII). However, the Builders’ Association of India (BAI) is the supporting partner and IECIAL is the sector partner for the event.

Tracing the genesis of Excon, Mr. Sondhi explained that over a period of time, the event has graduated from a mere forum of domestic fair to a phenomenally global event with impacts similar to the internationally acclaimed trade shows. The success of the Excon series of exhibitions at the international level can be attributed to the India’s image globally as an ideal destination for investment in infrastructure development. Today, almost all the internationally acclaimed players have set up their manufacturing facilities in India and also expanding them further. They regularly participate in Excon series of exhibitions thereby making the event a big draw. Over the years, Excon has been recording amazing addition in exhibition space and also exhibitors and quality visitors. This edition of Excon will sprawl over an area of 2,00,000 sqm, a 35% more exhibitions space than the previous edition. Besides, the event will witness a record numbers of over 600 exhibitors including 200 overseas companies who will exhibit their latest innovative products and technology. This time Excon will have pavilions of 8 countries i.e. China, Japan, Germany, Italy, Korea, Spain, Turkey and Finland and we are expecting more quality visitors from Indian sub-continent, Middle-east, Africa, and other Asian countries, Mr. Sondhi added.

A number of new initiatives to promote and reach out Excon aggressively in India and abroad have been put in place including the setting up of 7 task forces with leader aggressively promoting Excon through Road Shows organized in India and abroad to reach out industries and professional bodies across the length and breadth of the country and also to other developing countries in Asia and Africa. The response to these initiatives has been in line with our expectations to solicit a unique support for the event through meaningful networking with the prospective visitors and attendees. 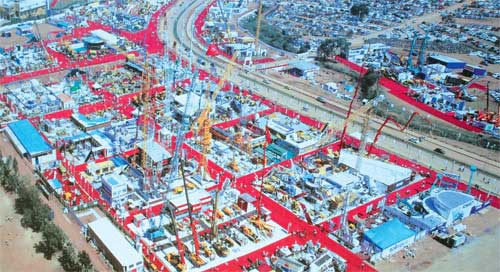 Another important highlight of this year’s show is to focus on SME's participation in the exhibition with special package to motivate them to participate in the event. To sustain their positive interest in the Excon, a scheme of award has also been introduced.

A number of meetings, conferences and seminars are being organized on the sidelines of Excon 2011 where captains of industries would deliberate on issues currently confronting the industry.

The Chairman, Excon, also spoke about Excon and CII's sustained parlays with the government of Karnataka resulting in solving travelling travails of the participating companies and visitors to reach BIEC. A flyover to re-route traffic to BIEC is in place and the commissioning of the first phase of Namma Metro is expected to further ease logistics related problems. Free shuttle services from city and airport to Excon site have been put in place to ensure hassle free and comfortable journey for the visitors and participants alike.

Stressing the need for a full-fledge exhibition centre like BIEC in other parts of the country, Mr.Sondhi said that the time has come to have a couple of such venues in various parts of the country sooner or later. Till such time, we have in place the existing physical infrastructure at BIEC, which could be upgraded further. To a suggestion, taking Excon to other countries, Mr.Sondhi advised that first we must promote Excon more proactively in the SAARC countries and then we can think of taking Excon to other foreign shores.

Talking about the current scenario with renewed focus on infrastructure development and Excon 2011 happening under the ongoing spell of global and national headwinds, Mr.Sondhi very confidently felt that Excon 2011 is expected to lift the construction equipment market including allied products and services out of the grip of slowdown. The emerging economies in the developing countries like India, despite inflation looming large on the horizon, would continue to be the favorite destination of global construction equipment players. As the country has planned to spend a massive amount on infrastructure development with several new mega projects on hand, particularly in the road and highway sector to improve road connectivity at the national highways, state highways, district roads and rural roads, would pave the way for construction equipment demand substantially particularly for the hi-tech and sophisticated equipment and machinery. In this contest, the relevance of Excon 2011 happening at this juncture comes to the fore to enhance capacity of construction equipment for up-scaling infrastructure in the country to bolster the image of the country in the eyes of outside world.

In his concluding remarks, Mr.Sondhi said that the Excon 2011 has already generated an overwhelming response from all quarters and the event is set to have a bigger business prospects with unique confluence of technology and business which no one in construction equipment industry would like to miss. The best way to find out this and more is to visit this show yourself, Mr. Sondhi insisted.