We are the leaders in mobile cranes in the country and have sought a technical collaboration with Locatelli, a reputed manufacturer of RT cranes from Italy. After signing and concluding TCA for a 60 T RT crane with them, we currently are in the process of transferring the technology. We intend to launch 60T crane in 2013. We are working on few more such opportunities and are already in discussions with some reputed global companies for forging ties that would expand our range of solutions even further for addressing multiple new applications and markets, says Mr. Rajesh Sharma, Executive Vice President ECEL, in an interview with S.A.Faridi.

What has been the business performance of ECEL during this calendar year? Has it been able to maintain its earlier business tempo with positive impact on its sales and volumes despite slowdown?
The industry went through tough times in 2012. The market demand for most of construction equipment contracted during the year, especially after March 12. This reflected in our sales volumes for the year as well. In fact, it is a bit paradoxical for us in the sense that we registered our best ever sales performance in the first quarter (Jan – March 12) but immediately after that sales volumes went down southward as activities in the Infrastructure development turned sluggish in the wake of dour economic sentiments.

Having launched your Backhoe Loader sometime back, how has market been evolving since then? Are you firm on your plans to revamp its manufacturing capacity or the company would like to wait for a while so that it could further populate itself in the market place with its advanced technical feature advantages?
Despite an increased competition and a sluggish demand scenario, we did relatively well in Backhoe Loader segment and doubled the users' base in the country. We also opened new overseas markets for Digmax.

Our plans are already afoot on ramping up manufacturing capacity and building sales volumes further and we are making good progress on both.

A word about your recent marketing tie-ups with global CE players like Italian crane maker Locatelli etc and the products range the company deals with. Are there further possibilities of more tie-ups with global CE player in the future?
We are the leaders in mobile cranes in the country. To meet changing applications and usage patterns, we felt that we needed to expand our range of rough terrain cranes which ended at 40T capacity. This drove us to seek a technical collaboration with Locatelli, a reputed manufacturer of RT cranes from Italy. After signing and concluding TCA for a 60 T RT crane with them, we currently are in the process of transferring the technology. We intend to launch 60T crane in 2013. 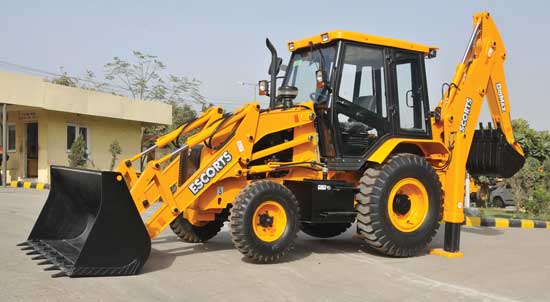 We are working on few more such opportunities and are already in discussions with some reputed global companies for forging ties that would expand our range of solutions even further for addressing multiple new applications and markets.

Business in road sector is waning out. As important players are diluting their stakes in road construction business and migrating to other business areas where they see more interest; Is this a sign of consolidation taking place in the road sector? What would be its impact on the market dealing with road construction equipment?
On the contrary, the competition is increasing in Road construction equipment as well. If you look at the last three years, you would find many new players who have entered into this segment. This is despite the fact that demand has persistently gone down over the last couple of years. The continuance of interest in this equipment segment is simply on account of high growth potential as developing roads still a top priority for the nation. Therefore, Investments & development activities will continue to grow in Road sector and so would the competition.

What is ECEL's assessment for the growth of CE market considering 2014 as an election year which will therefore boost the infrastructure development projects in 2013, resulting in the demand of construction equipment?
Considering various factors which drive demand for construction equipment, and their current and likely future status, it seems that 2013 should be marginally better year than 2012. However, real growth will only happen after infrastructure development starts receiving a top priority from the government that is strong in mandate and resolute in vision. You would agree that such a scenario most likely would play out only after the elections.

From the days of manufacturing CE locally in shed to the days of entry of multinational companies (MNCs) and their subsidiary, the industry has made a lot of progress. How over this period there has been a marked improvement in the technological status of the home grown companies? Do their products compare favorably with those imported from low-cost country or the product reconditioned in the country and put into the market stream?
As it would happen in any other eco- system, Indian CE manufacturers also focus on meeting the quality, technological and operational requirements of the local market. Therefore, they could be designing and manufacturing equipment in a quite different manner in comparison to the manufacturers from other parts of the world but it is so by the intent and with objectives of meeting the local conditions closely. The local manufacturers dominate domestic market for construction equipment. They are meeting over 83% of the total demand. This in itself is a statement on the capability of local manufacturers to withstand any competition.

Companies in all sectors are going in for a lean organization, outsourcing many of their activities and function. Can sale and marketing function be outsourced as being done by a number of car manufacturing companies in the country? What are the pros and cons of this concept if applied to CE companies?
All the companies with dealership networks have in fact outsourced a significant part of sales and service activities. It is the network partners who do the sales and service activities as a front line interface with the customers. However, marketing and product management are done directly by the companies.