D S Kulkarni Developers Ltd., the flagship company in the group has won the coveted distinction of being India’s 2nd ranking construction company. Having built a record number of over 20,000 homes to date, the company is working rigorously towards providing affordable housing for middle class, says its Chairman and Managing Director, Mr. D. S. Kulkarni, in an interview with Maria R.

How over the years, DSK Group  has emerged as a pioneer in many aspects of business from initial inning  as a provider of services in plumbing, electrical works, repairs  and finally landing in the construction sector. What has been the secret of Group's success story? 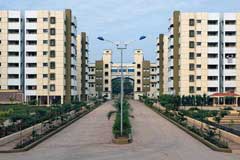 My father was neither a businessman nor he owned any establishment. Since childhood I worked for service Industry. My work always had middle class in focus and that is the reason I came to know who are my customers, what are their needs, what they dream of, and what are their nightmares etc. I got totally immersed in my business with this core understanding. The success followed itself automatically. To put it in a nutshell, I consider the “understanding, the requirements of customers and fulfilling it aptly” is the success mantra of DSK Group. Today, the Group is one of the most respected business houses in India with several ventures to its credit.

DSK Group has developed a unique expertise through its flagship company—DS Kulkarni Developers serving the real estate development sector. Can you enumerate a few projects executed so far and important ongoing projects in hand? 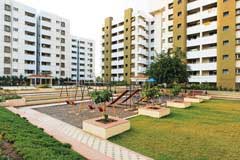 A home is a feeling of belonging that no other place in the world, however luxurious, can give. At DSK, we appreciate the emotions that are attached to a home. Buying a home is an investment of a lifetime, the single most important decision that you make. And that’s why we build homes not houses!

I consider DSK Vishwa as our most prestigious and close to the heart project due to its many specialties. It is an ambitious 10,000 plus homes project and the largest in Asia, has redefined the quality standards in the industry and has set a fine example of how eco-friendly housing should be conceived and developed. Interestingly, When DSK Vishwa was launched; 1000 flats got sold in 7 days a feat that will sure qualify to be a world record!

Also a huge township is coming up at Pune-Solapur road near Manjari Annex. We have planned 14,000 homes at a sprawling 250 acre land. The work will start in full swing in 3-4 months. Again this would be a special project. In future, our most of the work will be performed by hi-tech machines and less of human efforts. We will construct only affordable homes for general people. While aiming so, we would do cost-cutting but definitely quality will not be compromised. We are aiming only at highly affordable homes for middle class so that no family is left homeless in Pune- Mumbai. We are working in this direction.

Real estate industry has grown almost 30%—but in patches. Do you believe that commercial real estate will perform better this year?
We have 2 different kinds of markets where real estate is concerned. For example, we have the Pune market that is driven by flow of migrants from other parts seeking to buy homes and we have the Mumbai market that is driven by pure speculation. In both scenarios, we cannot accurately forecast how the markets would behave in the next year.

How do you tackle the risks and uncertainties involved in the real estate industry?
I as a businessman have to weigh the odds and only take calculated risks. I focus on the middle class. When inflation rises it affects the purchasing power of a common man. For example, I have Toyota dealerships in 8 districts other than Pune, but I do not have any construction project in any of those towns. I always evaluate the purchasing power of the middle class. I do not engage the services of middlemen and that has always been my policy right from the beginning. I always ensure that I keep a sustaining capacity of at least 2 years. I do not engage in overtrading and that has helped me remain out of financial trouble.

Has the new government policy made SEZ projects less favourable? 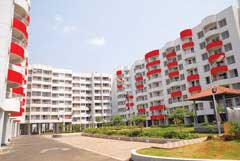 It’s all good on paper. According to the plan 75% of the land is intended for commercial purposes and 25% for residential purposes. Even though theoretically the core purpose of creating SEZs is to generate employment, in reality it never works that way. The social angle is always ignored. Government should provide its own land for SEZs. It always acquires land from individuals at far less a value than the market value. There’s bound to be resistance from locals. Besides, the government always seeks to start SEZs in places like Mumbai, Pune, Noida or Bangalore where land value is already very high. What the Government should do is to focus away from the metros and the mini metros into the rural heartland where there is abundant agricultural land that is unfit for cultivation. There are places like parts of Sholapur such as Mann where the conditions are totally unfit for cultivation and not a blade of grass grows. For this the Government has to increase connectivity to such areas by building a network of highways to facilitate growth. Only then we can see uniform growth and the true purpose of SEZs. If necessary, the Government should also partner with private parties to create these SEZs.

The SEZ Act will be enacted in Maharashtra. How will it impact developers?
The Government policy has always been to engage Government agencies such as MHADA to create the SEZ infrastructure, which is often substandard. To create quality infrastructure such as airports, 8 lane highways, electric lines, multi speciality hospitals, dams, canals etc. and make conditions attractive to private enterprise, the Government must sub contract infrastructure projects to professional organisations from private enterprise. If this happens, it would certainly have a positive impact on developers.

Do you believe a better exit policy in the SEZ Act would attract more foreign players?
To attract foreign investment we need high class infrastructure and good governance. With land being acquired from people the way the Government does, there always remain issues that are not addressed and these uncomfortable issues surface later and become hurdles. Foreign investors would always be in apprehension because of incidents like Singhur.

DSK Group has constituted DSK Energy Awards, what are the scope and coverage of these awards and the benchmarks on which these awards are given.
Those builders who comprehensively use non-conventional source of energy to build green homes are chosen for the awards. Projects with extensive use of sewage water, rain water harvesting (RWH), solar energy are honoured with DSK Energy awards.

We firmly believe that we should give back to nature what we are taking from it…in other words we must make optimum use of solar energy at the same time water must be harvested to increase underground water level. To encourage such type of work, we have instituted the Energy awards.