Right from its inception in March, 1947, Sekisui Chemical Company, practiced sheer devotion to serve mankind through innovation and professionalism. It has achieved spectacular success in promoting its unique plastic product named as 'Cross-Wave,' a befitting and very effective ground water conservation and storage system. Currently, it is working wonders around the globe not just in conserving and storing water but also recharging the drastically depleting global ground water table through its rare rain water harvesting techniques. In a short span of over six decades of its existence, Sekisui group has achieved a whopping global sales worth $10 billion and still growing at an amazing pace promising huge business potential, says Itani Masayuki, during an extensive interactive session with NBM&CW.

Responding to a poser about its initial Indian initiatives, he claimed that Sekisui is currently targeting South Indian states on priority to install its ground water conservation units and then exploit the business potentials of the North-East Region of the country. The company has already installed its two units in Jaipur, Rajasthan and is evaluating business strategies to set up similar units in water deficient areas across North Indian states including Haryana and Punjab.

Quoting global research reports, he said that India is projected to have a 50% shortage of water by 2030 and in contrast its key competitor China on the other hand will be able to reduce the water demand supply mismatch to half. In fact, the Indian policy makers have decided to increase water use efficiency by 20% till 2017 as a part of the action plan on climate change and new policy initiatives of the government are opening up new business vistas to the Sekisui's water conservation system. 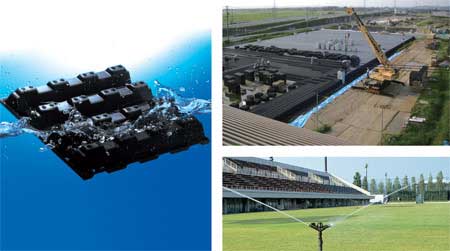 To begin with, the company is interacting with local consultants, architects, civil engineers, and contractors working in the private sector to promote our products and also roping in Japan embassy in its Indian product promotion initiatives. Currently, hectic negotiations are on with the targeted state governments and talks are in advanced stage with the central agencies to install similar systems, he claimed.

Explaining functions of the Cross-Wave system he added that the system is a water holding material for rainfall accumulations installed within underground reservoirs and it has been certified by the ARSIT, as a Japan's new technology product for ground water conservation mechanism. In the process, the underground water space created by Cross-Wave effectively controls flood of rivers and drainages. Alongside, it also provides a system through which stored rain water can wisely be used as per requirements for different purposes including daily life usage, industrial or during hours of crisis including emergencies.

Elaborating on the technicalities of the product, Mayasuki said that the Cross-Wave system is a light-weight, easy to transport and very simple to install. It can be used for a variety of civil engineering purposes as light weight fill material or temporary construction material. Since no concreting work is involved, it's speedy in installation.(1000m3 could be installed in 2 weeks). Its installation process is very simple involving digging, spreading and laying lining sheets, piling up Cross-Wave, setting spacer and finally covering up with lining and protection sheets. 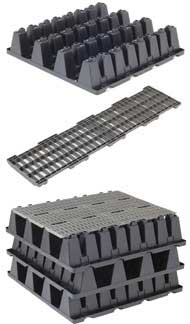 That apart, due to high void ratio of 95% large amount of space could be utilized for routine purposes. In its entirety, it is a very strong and robust system that can easily withstand and take 25 tons of truck loads as well as 45 tons fire tenders and can easily move over it. The finished surface can be used as parking lot, gardens etc in residential complexes, hospitals, offices etc. The entire operation is time saving as installation can be done manually as no heavy tools and equipment are required during the installation process. As compared to concrete tanks, in case of Cross-Wave no curing time span is required thereby again saving lot of time. To top it all, the system is environment-friendly as no pollution is generated or caused during the entire process. The material used in the installation is polypropylene with excellent physical & chemical properties keeping the stored water free from pollutants besides being easy to maintain and has a long life span of 50 years with recyclable properties.

The application areas of Cross-Wave system is very effective in controlling flood, rain water harvesting, groundwater conservation, industrial purposes and irrigation, fire fighting and meeting any type of natural disaster. Cross-Wave can be used from less than 100m3 to more than 10,000m3. Water stored can be used for fountains on small stream to develop hydrologic cycle that can further add to the quality of life. Over 2000 units are successfully operating in Japan for the past 10 years.

Since the Indian economy is growing fast with focus on infrastructure development and green buildings; rain harvesting system, flood control measures and controlling overflow in redeveloping areas, Sekisui Cross-Wave system could be very useful. Company's Indian operation has already chalked out an impressive program for the promotion and marketing of Cross-Wave system. Aiming at pan India presence, it has divided the country into four regions, namely; North, East, West and South, focusing on each region's specific requirements largely in view of the depleting water table in some regions and heavy rain fall in others, the system will work wonders in meeting ever increasing water requirements of the masses, he concluded.