"Hess got an overwhelming response within a short period of time after commencing the operations in India. Recently, we commissioned the plant RH 1500 for Ecologic Building Systems in Northern India and setting up the biggest fly ash brick, block and interlocking paver plant in Eastern India. The biggest fly ash brick plant in Eastern India on the way for Jindal Group, can convert 500 tons of ash in a day. This is the best solution for the environmental issues created by the massive fly ash output from power plants. The type of plant which Jindal is setting up, can produce around 2 lakh bricks in a day by using top and bottom ash with 60% fly ash. Apart from this, Hess is setting up the biggest steel briquetting plant in China for converting slag for proper storage as well as blasting. The good news is not only for fly ash and steel but also for the existing ready mix plants which can improve the performance by adding the press machine. The Hess Forest single station press can utilise the existing ready mix plant whenever idle to produce kerb stones, slabs and steps. The best part in this installation is using existing batching plant, land area and operators to add a new product line in your existing business. The raw material is the same, administrative and sales expense also remain same as well as the customer too," says Mr. Manoj Kumar, Managing Director, HESS Group-India, in an interview with S.K.Khanna. 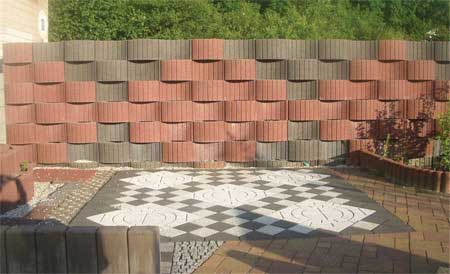 What is the product range of Hess Group available in India to serve its construction market? 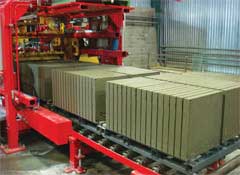 Hess machines are designed to cater the construction industry and in particular to concrete, fly ash, AAC and steel slag. Mainly it is used for the production of concrete blocks, interlocking pavers, flag tiles, kerb stones, heel kerbs, garden scaping and landscaping products, light weight concrete, fly ash bricks, concrete pipes, wet press systems and moulds for the industry. All the Hess products are available in India either as a total import or partial import with the balance from India. In block industry, we do have mobile machines and in static plants with capacity varies from 6000pcs to 30000pcs in 8 hour shift. Mixing plants with a capacity ranges from 500litre to 3750litre and pipe machine from 250mm to 2000mm dia and 3.5metre length. In AAC industry, we have the plants from 200cbm to 2050cbm per day.

Hess is in operation in India for quite some time–what is the response from Indian market to its products and services? 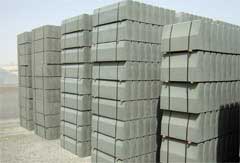 We are getting a very good response from the Indian market and we already installed number of plants in short period of time after the commencement of our operation in India. Recently, we commissioned a big plant RH 1500 with mixers and full automatic handling system for Ecologic Building Systems in North India. Also we are doing two major projects in AAC line and recently commissioned pipe machine in Nasik. At present, we are doing the installation of wet press system for A&P Builders and Engineers in Kerala. We are expecting further three projects in the beginning of next quarter and at least in half a dozen projects we are in serious discussions.

How the Group is set to strengthen its presence in India and its new marketing initiatives to get more share of market in India?
We are already in the process of acquiring the land for building the Hess factory in India which is expected to be ready by end of 2011. Engineering for the same has already started and we are planning to execute the entire handling system including elevator, lowerator, belt conveyor, latch conveyor, slat conveyor, wet press machines and moulds in the beginning. In a second stage, we will go for the machine and operating panels locally without any compromise in the German quality. We are still weighing the market share as we just completed the first year of operation in India and able to get a flying start with the present projects in hand.

At bauma 2010, Hess launched its latest equipment—RH760 for the first time. What is its relevance to Indian market and when it is expected to be launched here?
RH 760 is a machine mainly designed to cater some particular markets where few of the old machines from the competitors are unable to provide the strength as per revised building codes. In such cases, RH760 is the right machine to replace such old machines with less time, same operating systems, handling systems, moulds and pallets with bare minimum investment. 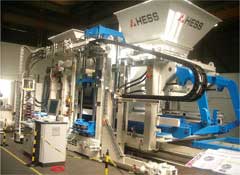 A major change is very much necessary for the construction industry and it has already started in south and western parts of India. Recently, a big change can be seen in north and east. Still most of the states are not ready to stop the brick manufacturing which is creating major troubles to our farming and ecological system. NGO's and officials are talking of green environment and not taking enough steps to strengthen the awareness in general public. We should start basic awareness in schools and colleges. Even this kind of education and awareness is necessary for the consultants, architects and builders. There are several advantages with the right products like thermal insulation, sound insulation, termite resistance and saving on structural load, foundation load, and electric loads. Also the benefits in the form of faster construction, saving of cement and reduction of manpower which will ultimately benefit to the buyer, builder and environment. There are several exhibitions and seminars taking place in different locations in India and they could make the seminars together with the help of construction magazines like NBM&CW. The related institutions can play a vital role in preparing the right codes for building materials and able to give a quality mark or certification process which may be helpful to use the right products in construction. Implementation of such quality trade mark required proper framework and it should connect to the local administrative bodies who can monitor it on regular basis. But all these kind of a change must from the bottom level-education to selection of right raw material, technology and the right equipments.

What has been the business performance of Hess Group in India in the last two–three years and its business target for the next few years? 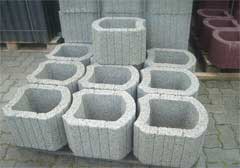 As I mentioned in the previous question, Hess has just completed the first year of operation in India and able to start properly. The success or performance could assess only after three years minimum in the market. Anyway in a short period of time, we are able to deliver a number of plants as well as generating good number of enquiries regularly.

A word about Hess Group's technical services to its client in India.
All the Hess machines are working with Siemens S7 software together with Bosch Rexroth, Lenze and SEW components. Any trouble in the electrical, electronic and software problem will display in the PLC system itself. Apart from that, the machines have been equipped with a modem system which can be connected to a telephone line and able to check problems from our hotline service centre 24hour/7days. Parts are clearly showing the original supplier and serial number which is easier for the buyer to source from the local market or from Hess. All the Hess machines are using standardized parts and supplies which is easier to do the up gradation at any point of time.