bC India 2013, an International Trade Fair for Construction Machinery, Building Material Machines, Mining Machines and Construction Vehicles will take place from 5 to 8 February, 2013 at MMRDA grounds in Bandra Kurla Complex, Mumbai. The second edition of the BAUMA CONEXPO show is expected to host about 700 exhibitors and over 40,000 trade visitors over an exhibition space stretching across 150,000 square meters, which is nearly 50% more as compared to 88,000 square meters space it covered in 2011.

Although the World economy and the Indian economy are looking on the face of slowdown, the Indian construction sector seems to be on the growth path. In an interview with bC Expo India, the official spokespersons of research wings RNCOS and Germany Trade and Invest (GTAI), Shushmul Maheswari (SM) and Anna Westenberger (AW) respectively, appeared optimistic and are of the opinion that the Indian construction sector is likely to clock double-digit growth exactly over and above the country's average GDP, which it has consistently been maintaining for the past few years. Though the economic slowdown of 2008 adversely impacted the construction equipment industry for a short duration but it bounced back on its growth trajectory in 2009-10, which is expected to continue in future as well. Here are the brief excerpts of the interview. 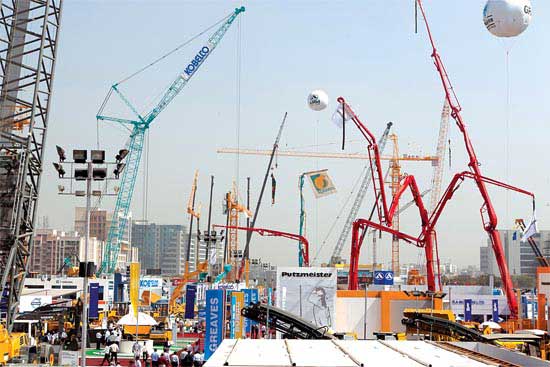 What is the most unique feature about of the Indian construction industry?
SM: The Indian construction industry is highly fragmented. This is partially due to the fact that, for most projects, there are no long-term relationships between the contractors and clients and partially due to the fact that the sector in many cases lacks economies of scale. Thus, smaller players may have better cost structures due to lower overhead costs. Furthermore, one has to differentiate between the organized and the unorganized segment of the sector. The organized segment consists of firms and independent contractors who manage their business on a more professional basis and operate on small and medium as well as large scales. The unorganized segment primarily consists of stand-alone contractors that operate at a small scale.

What does that mean for the demand for construction equipment?
SM: India, as the world's seventh largest by area and the second biggest by population, is one of the most dynamically growing, countries but largely untapped construction equipment markets. In the recent years, the country has witnessed massive investment in the construction industry from both public and private enterprises. Multi-billion dollar investments in constructing roads, ports and power plants, and developing telecommunication sector and urban infrastructure have paved the way for the construction equipment demand to grow phenomenally. Industry experts predict the market be growing faster in coming years. From 2010 to 2020, it is estimated to grow six times to a size of 20 to 25 billion US dollars.

But won‘t the recent slowdown in economic growth affect this trend?
SM: According to our research report, "Booming Construction Equipment Market in India," the Indian construction equipment industry has been witnessing a consistent double-digit growth over the past few years. Though the economic slowdown had its moderate effects on the industry, it regained momentum in 2010 showing a stupendous growth which is expected to continue in the years to come.

AW: The construction equipment market did indeed grow slower; nonetheless we are still talking about five percent annual growth. The reason for this decline lies in growing uncertainties regarding the market and its regulations as well as rising capital costs. In the mid term, we are still not worried. Especially, the demand for low-budget housing will very likely not decline, especially if one takes into account the rapid growth of India‘s metropolises.

What are the main drivers for this growth?
SM: The earthmoving segment, in particular, has been driving the overall construction equipment industry in India with the strong demand emanating from the government-backed infrastructure projects. The segment is poised to register a remarkable compound annual growth rate of around 21% during 2011-15, as per our estimates.

AW: We also expect significant growth from infrastructure. The current five years plan of the government, which stretches the time till 2017, includes doubling the investments in this sector compared to the recent one. Big investments are planned to expand the countries energy and water supply as well as roads and the train network. Furthermore, several ports and airports are either being planned or have already been completed.

Don't you think India is still behind when it comes to the market for construction machinery and equipment?
AW: so long as labor costs are comparably low, at least smaller firms will shy away from the investments that come with that sort of equipment. India‘s highly fragmented building sector still hosts a significant number of these. Especially, if we talked about smaller building projects, the smaller builders often have an advantage, since they offer cheaper labor compared to the big competitors. But even as we speak, the circumstances change. There are two main factors that make a growing construction equipment market very likely. The number of large projects is growing strongly. With those, heavy machinery is without alternative if companies want to build beyond a certain size. Especially in the metropolises many new buildings have reached a size which is impossible to build without the help of professional equipment. The second factor is the time. The more the sector is professionalized, the shorter the schedules become. Manual labor may still be cheaper, but it will consume more time. And this is the time that especially the big builders are not willing to afford.

What can the Industry do to foster the expected growth?
SM: It is a major task for the industry to adapt to the expected growth. India‘s worldwide market share in the industry already tripled to six per cent from 2004 to 2010 and will continue to grow. Companies therefore have to adapt on multiple fronts. One of them is the collaboration with the suppliers, another is improving the competitiveness. This means, for example, to create new products which suit the Indian‘s customers demands and to continuously upgrade the skills of the sales force.