Improved Two-cycle Engine for Rammers and Hammers from Wacker Neuson

The WM 80 two-cycle engine is well within the limits defined by the EU emissions standards. "We have reduced hydrocarbon emissions (HC) by over 70% and carbon monoxide (CO) emissions by over 50%," explains Senarat Jayasekera, MD of Wacker Neuson Equipment Pvt. Ltd. This was primarily achieved by deploying a new cylinder that optimizes the charge cycle and increasing fuel combustion efficiency. "Furthermore, we have deployed a tried-and-tested metal catalyst from the automobile industry that is the perfect fit for our equipment," adds Jayasekera. 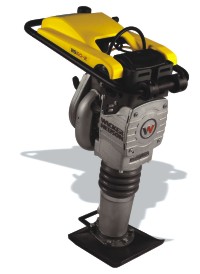 "Thanks to our clear re-engineering focus, the new WM 80 offers a whole range of efficiency gains and enhancements," explains Jayasekera. For example, engine performance is increased by around 10%, while fuel consumption is reduced by approximately 13%. Typically favored for its compact design, the two-cycle engine also reduces the footprint even further, making two-cycle Rammers and Hammers easier than ever to operate. In addition, a new carburetor ensures that the engine starts exceptionally smoothly. But of course, the new version also retains all the benefits our valued customers know and expect from the two-cycle engine: unbeatable power density (kW / kg), robustness and low maintenance requirements.

Wacker Neuson's most popular rammer series is the BS-2i. The BS 50-2i, BS 60-2i and BS 70-2i feature Wacker Neuson's exclusive Advanced Injection System (AIS). These Wacker Neuson rammers are designed for performance and to protect the environment and the operator. Only Wacker Neuson's two-cycle rammers with the advanced oil-injection system offer the following innovative advantages, plus the performance of two-cycle technology:
The 59 kg, BS 50-2i; the 65 kg BS 60-2i; and the 75 kg BS 70-2i offer reduced hand-arm vibration, integrated fuel valve and throttle lever for simple operation, easy starting, and optimized weight balance which lowers the centre of gravity for easy operation.

Wacker Neuson Rammers are the best choice for the compaction of cohesive, mixed and granular soils in confined areas. They are backed by a complete After Sales Programme via authorised dealers across the country.