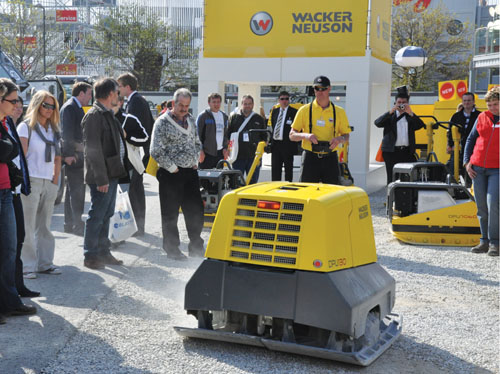 Wacker Neuson SE unveiled the world's most powerful vibratory plate – the DPU 130 recently. The company has also been busy developing several other innovative vibratory rammers and vibratory plates with a focus on improving performance and ease-of-use.

The DPU 130 from Wacker Neuson is the world's most powerful and modern vibratory plate. The remote-controlled plate is expanding the boundaries of vibratory plate performance by delivering enough compaction performance to replace small and medium-size compaction rollers weighing up to seven tons. The DPU 130 is also raising the bar in safety and user friendliness for soil compaction jobs. In addition to delivering best-in-class performance, the remote-controlled plate is designed for extreme flexibility and is significantly more maneuverable than even some large walk-behind vibratory plates. The infrared remote control ensures that operators can work safely and are not affected by emissions or vibrations. 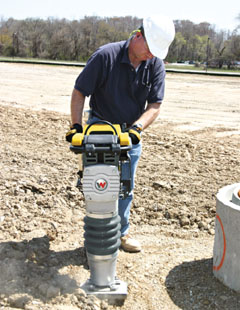 "We have chosen the 80th anniversary of the vibratory rammer to present powerful and user-friendly new additions to our rammer portfolio," announces Oliver Kolmar, product manager for soil and asphalt compaction at Wacker Neuson. Wacker Neuson's successful track record in rammer production started back in 1930 with the launch of the world's first electric rammer. The machine has come a long way since then, driven by various Wacker Neuson inventions that have culminated in a number of firsts. The Wacker Neuson rammer, for example, was the first device of its kind to feature a combustion engine in 1952. The latest version of the two-cycle rammer with the company's own WM 80 engine delivers significantly lower emission levels and has an optimized engine protection system. "Not only does the two-cycle engine emit negligible carbon monoxide but also its total carbon monoxide, nitrogen oxide and hydrocarbon emissions are lower than those produced by any four-cycle engine," explains Kolmar. "The fact that more than 50% of all rammers sold worldwide use a two-cycle engine speaks for itself." A number of other changes have been made to the new series of rammers: The starting performance has been optimized, and the streamlined housing makes the rammer easier to handle and also facilitates the job of compacting soil along walls. Wacker Neuson has also improved the performance of its four-cycle rammer. "This is the first four-cycle rammer that comes close to matching the performance of our extremely powerful two-cycle rammers," says Kolmar.

Wacker Neuson has also further developed its offering of mid-size vibratory plates with weights ranging from around 400 to 500 kg and delivering 40 to 65 kN of compaction force. The DPU 4545 H, DPU 5545 H and DPU 6555 are newer versions of proven devices that now deliver improved all-round performance, including a significant improvement in compaction performance. "We have been able to increase centrifugal forces by 5 kN on these plates, and thus increase forward speed. The improved compaction performance means a significant gain in productivity for operators," explains Oliver Kolmar. In addition, the forward and reverse speeds of the new plates have been brought into line, which results in higher-quality surface finish. Overall, the machines are now more robust and durable. "This new generation of mid-size plates has enabled us to improve on an already excellent product," states Kolmar.

Wacker Neuson has also developed a new series of lightweight vibratory plates. During development of the single direction plates and reversible plates weighing up to 100 kg, the focus was firmly placed on operators and their requirements. "The new small vibratory plates have a number of special features that are unique in the market," reveals Kolmar. The unique, specially formed base plate is the key to the plate's excellent maneuverability. The device is particularly easy to rotate, and even sharp turns will not damage hot asphalt surfaces. Furthermore, the shape of the base plate allows the machine to deliver outstanding compaction performance along edges. A fold-down guide handle makes the machine even more versatile and more compact to transport. All plates have a unique handle design that enables users to securely hold the machine at different points and even operate it from the side. An integrated trolley for quick and easy transportation on construction sites is a further first for vibratory plates of this size.

Plates in the 250 kg segment with outstanding power/weight ratio

The slightly larger DPU 3750 and DPU 3760 plates also ensure high levels of mobility on construction sites. This is due to their proven integrated wheels. This makes them the only machines in the 250 kg weight category that can be moved easily to where they are needed once a job has been completed. They also deliver unusually high compaction performance for machines of their size. "37 kN DPU-series vibratory plates have an unbeatable power/weight ratio," explains Oliver Kolmar. Both plates are available in electric starter and manual start versions.