In Nochten, Lausitz (Saxony), one of the world’s biggest self-propelled industrial machines – an F60 conveyor bridge (aka “horizontal Eiffel Tower”) – has been in almost daily operation since 1976. During that period, the 500 m long colossus has moved an impressive 3.6 billion cubic meters of overburden to give access to some 800 million tons of lignite. But sooner or later, even giants start to feel their age, and to ensure many more years of trouble-free operation, work started in 2007 on a general inspection of the F60 for wear and tear. That was followed, three years ago, by the planning work for the replacement of two of the F60’s main components, the equalizer and the roller table. 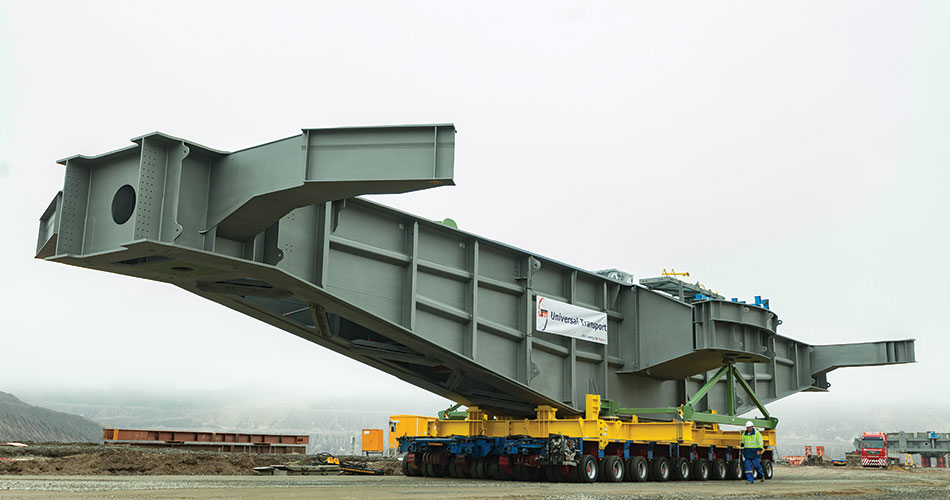 Replacement for the “horizontal Eiffel Tower”: the new equalizer in the grounds of the Nochten opencast mine.

The four journeys required for removal and delivery of the components were handled by the heavy haul experts at Universal Transport using Goldhofer modules supplied by Trans A.D.M. They were preceded by extensive preparations and calculations. In order to create enough space to maneuver with such huge components, for example, over four kilometers of haul roads on the grounds of the opencast mine in Nochten had to be upgraded, including widening and leveling work. Weighing 193 tons and measuring 12.70 x 12.20 x 2.71 meters, the old roller table was the least daunting of the four components to be moved, and Universal Transport handled the job with a 4-axle tractor and a 14-axle Goldhofer THP/UT heavy-duty module. The much bigger equalizer (39.63 x 13.12 x 4.99 meters and 228 tons +23 tons for the transport frame) and the replacement components were moved using a self-propelled 20-axle modular vehicle.

The configuration for the self-propelled combination selected by Universal Transport comprised a 6-axle PST-SL, 4-axle THP-SL and 10-axle THP-LTSO. In the interest of 100% load safety, a 24-ton convertible transport frame was developed for bolting both cargo and the transport modules. Thanks to the careful planning in terms of route and materials, the remaining three journeys also went off without a hitch in this configuration. 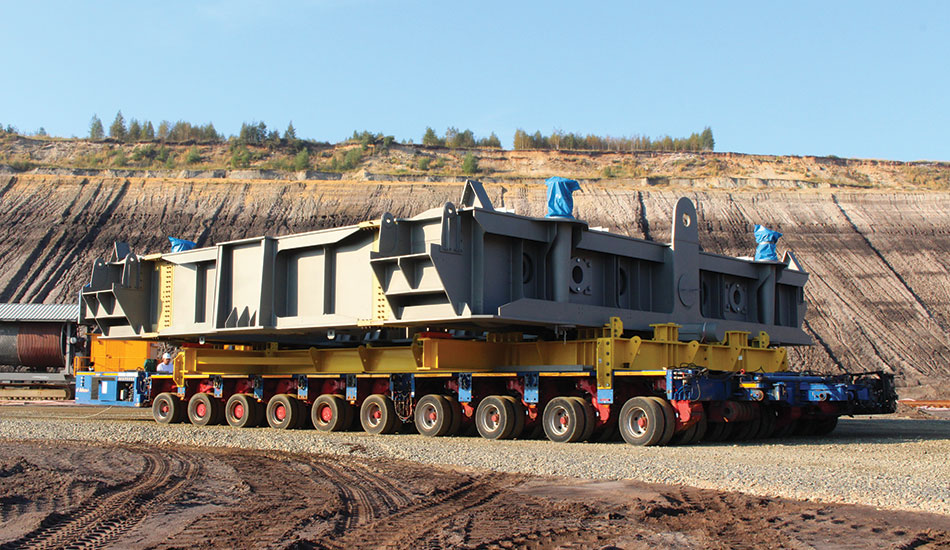 Impressive dimensions: The 24-ton transport frame is bolted onto the axle lines

The thorough planning work performed by the heavy haul experts, involving countless drawings, wheel load calculations and precise definition of the anchor points, paid off, especially at the installation point on the “horizontal Eiffel Tower”. Even the new equalizer as the biggest and heaviest item – with its awesome dimensions of 40.10m x 13.12m x 4.99m and a deadweight of no less than 315.6 tons plus 24 tons for the transport frame – was delivered to the site exactly as planned. The ability of the modular transporter to maneuver within a centimeter, ensured precise positioning of the cargo at the unloading point and a perfect fit for installation on the F60. The replacements were then quickly installed in the conveyor bridge, so that total downtime was a mere thirteen weeks, and the F60 has again been fully operational with the new components since the end of July 2016.