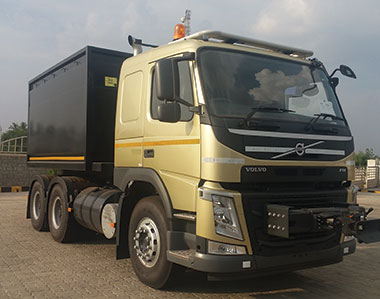 Manufacturers of pullers and trailers are making advancements in their existing product line and developing new ones to meet the growing need for hauling heavier loads with greater safety. P. P Basistha reports.

Manufacturers of pullers are offering higher powered prime movers, and are also making improvisations in their existing product lines. There is a growing requirement for hauling heavier loads with greater safety in the construction of core infrastructure and industrial projects, refineries, and in transportation of blades, nacelles, and tower sections of wind power projects.

To improve their gross margins, upstream oil companies are setting up refineries with higher levels of engineering complexities to process crude oils and other products, and adding more capacity. These modern refineries now feature heavier coke drums for the delayed coker units, reactors weighing close to 650 tons, and columns of fluid catalytic cracking (a major component) that weigh 180 to 696 tons. Instances of such modern refineries is the newly set up 15 million-ton Indian Oil Corporation’s Paradip Refinery and the newly expanded Bharat Petroleum Corporation’s Kochi Refinery.

These hydrocarbon-based projects involve colossal investments, and tight construction schedules. So, the heavy columns and other components used in the processing units must be transported from the production facilities/unloading ports to the construction site within a stipulated time frame, with great safety and precision. Any breakdown of the pullers can lead to a delay in the erection schedule at the site, for which the contractor is liable to pay the demmurage rent to the crane rental agency.

For optimum performance the pullers must have a higher gross combination weight (GCW), be fuel efficient, and adhere to the latest emission norms. Manufacturers are accordingly making the necessary improvisations in their pullers. Mr. Dinakar B, Senior Vice President - Sales, Marketing and Aftermarket, Volvo Trucks India says, “There are numerous factors being considered for designing modern pullers, given the need to haul heavier over dimensional loads for refineries, power plants etc. We are offering the advanced BS IV FM 460 6x4 Pullers. All our product offerings are featured with highly efficient powered engines, combined with intelligent gearbox ‘I-Shift’. The vehicle is robust and at the same time fuel efficient. The puller is equipped with Ultra Low Crawler (ULC), which provides high Startability, gradeability and better maneuverability at lower speeds. The Volvo FM meets the toughest environmental demands yet: nitrogen oxide emissions are reduced by 80 percent and particulate matter is halved. This has been made possible by improved Selective Catalytic Reduction (SCR) technology and is more efficient AdBlue dosing system. Since the pullers operate in long haul movement, our Dynafleet telematics tool is very handy for monitoring the performance of the pullers. The data can be analyzed by the customers for making any necessary improvisation in the operations. We have great confidence in our technology, knowing it is not only rigorously tested but also supported by an extensive network of service centers. In short, the solutions are a revolution in efficiency and productivity.” 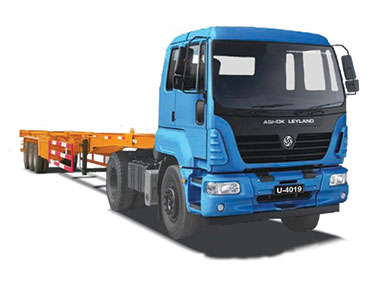 Scania is also in the process of rerating the engine of its pullers, R310, R410, R 440 and R 520, with similar engine horsepower, from BS-III to BS-IV norms. The pullers have GCW between 50 to 200 tons. According to the company’s senior company officials in India, the rerating is being carried out by Scania’s R&D centre in Sweden. Design improvisations are being carried out for delivering higher power to weight ratio along with improvisation in the cabs and in the axle arrangement. Scania India is presently offering its G460, 460 hp puller imported from its Brazil manufacturing facility.

Ashok Leyland will be launching its 300-400 hp tractor trailers for industrial infrastructure projects. Mr. M. Surendranath GM - Sales & Marketing Ashok Leyaland, says, “These pullers will have a higher tensile steel body for higher power.” The company is also designing a puller with 230 hp, powered by a 9-speed gear box. The company’s current range of pullers under its Captain and U-Trucks range are of 35-40-49 gross vehicle weights and 6x4 wheel combination.