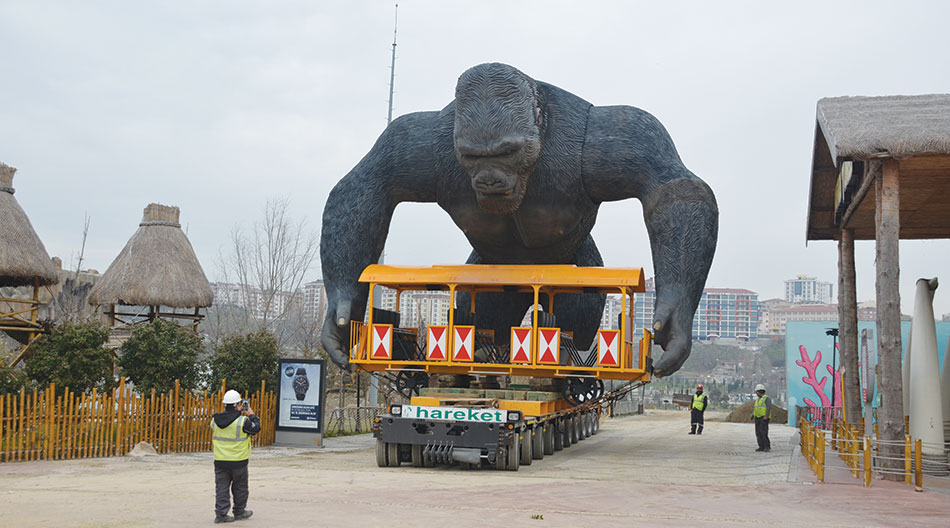 Occupying 20 hectares of land, the Vialand leisure park – with its 26 modern rides – opened in the Eyüp district of Istanbul in 2013 as the first leisure park in the whole of Turkey. Last spring, one of the main attractions – the King Kong – had to be moved in the framework of modifications to the park. The gigantic figure of King Kong alone weighs 30 tons and, in addition to a hydraulic hoist and other pieces of equipment, also houses counterweights to lend the necessary stability to the figure in action. For the ride, visitors sit in a carriage, which King Kong – roaring and exhaling smoke – then lifts twelve meters into the air and gives a good shaking before returning the carriage and its passengers – safe and sound, of course – gently to the ground.

Istanbul’s Hareket Heavy Lifting & Project Transportation Co. won the contract to move the ride a distance of about 700 meters. Following a preliminary analysis, the transport pros at Hareket decided to use a Goldhofer PST/SL-E self-propelled combination with ten axle lines. Samet Gürsu, project manager at Hareket, explains: “We decided to use the Goldhofer PST/SL-E due to the load’s high center of gravity and narrow roads inside the leisure park and for precise maneuvering with the figure.”

In the confined space available at some points on the journey through the park, the Hareket team was able to take full advantage of the electronic multiway steering on the PST/SL-E for precision maneuvering. The total load of the King Kong figure was not a problem for the trailer: The PST/SL-E has a high bending moment and, with an axle load of 45tons, took the 30ton giant in its stride.

A more challenging aspect of the operation was loading and securing the figure on the trailer, as it was engineered without any lashing points. In the first stage of the operation, a 500 ton mobile crane was used to lift King Kong off its base and place it on the PST/SL-E. Since it had proved difficult to perform a precise calculation of the figure’s center of gravity, hook blocks were attached to King Kong’s arm and leg articulation points to ensure correct chain length for keeping the figure in the vertical position while lifting and positioning it on the trailer. And to hold the cargo securely in place on the trailer, Hareket had a customized steel jig made with attachment points corresponding exactly to King Kong’s anchor points in the park. Once the jig had been bolted onto the PST/SL-E, the figure was secured at the attachment points. With that system, the Hareket team had no difficulty in maneuvering their cargo through the leisure park before using the telescopic crane again to unload King Kong and position the figure precisely on the new site.