Crane Rental: Where is the market headed?

Clarity on the direction of the crane demand and rental market for 2017 is yet to emerge fully. However, rental agencies concede that hiring rates may not take a complete plunge in the new year. P.P. Basistha finds out. 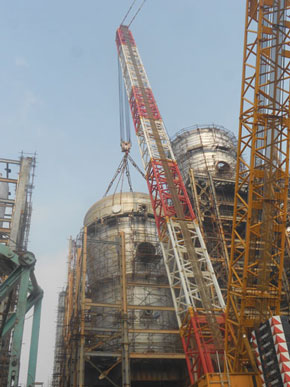 As the year drew to a close, the direction where the Indian crane demand and rental market is actually heading for, continues to remain mixed. The forecast is highly divided. There is apprehension among rental agencies owning medium and heavier capacity mobile and crawler units, that with Reliance Jamnagar phase 3 refinery expansion drawing rapidly to its completion stage, the market will be soon flooded with cranes released from the project. However, the pace of the refinery expansion is yet to be fully ascertained. The apprehension is also based on the completion of integrated, Mega Kochi Refinery Expansion project of Bharat Petroleum Corporation. However, there is also optimism in various quarters based on the firm demand fundamentals, from the upcoming metro railway projects in various parts of the country, the buoyant windmill sector, road and bridge, energy, and general infrastructure projects.

Demand and rental rates for the higher 600 ton capacity crawler units is expected to remain fair, based on the ongoing expansion of wind farms across the country. Offtake of new units continues to remain firm from the sector. Liebherr Cranes has delivered fresh units of LR 1600/2 to wind rental agencies in 2016. The company will be delivering another brand new unit soon. Sany Heavy Industries India delivered six units of its SCC 6500 A, 650 ton crawler crane to rental agencies involved in the windmill sector during 2016. It had booked fresh orders to deliver another twelve units by the end of 2016.

Sany Heavy Industries India also delivered in 2016, ten new units of its STC 1000-S, 100 ton truck cranes as supporting cranes in the windmill sector. The 56 meters, five sections, U-shaped boom, and 22 meters fixed jib is imported by Sany India from its China facility. Sany India is looking to execute orders at least for eight to ten new units for its 130 tons truck cranes from industrial projects as well as for flyovers and metro projects for erection of precast sections and girders. 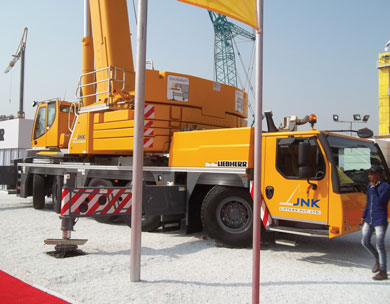 Completion of Reliance J-3 expansion may lead once again to oversupply of cranes. However, the situation is expected to pass through correction led by demand for fresh and used units from the European markets, and also by absorption of the released cranes across medium and higher capacities is expected to take place from Mumbai, Nagpur, and Lucknow Metro Railway projects. Phase-4 expansion of Delhi Metro is likely to contribute to offtake, preventing any large scale depression of the hiring rates as witnessed in the recent past. Cranes will be required for the metro project for general erection as well as for heavy lifts involving lifting and lowering of TBM sections through the shafts.

Greenfield nuclear power projects are also expected to be a major driver for medium capacity mobile and crawler cranes in the medium term. The government is laying major emphasis towards development of nuclear power projects across the country. 540 mw capacity is at various stages of implementation in the country. The government has set an ambitious target to set up 2800 mw of additional greenfield capacity in the years to come. It is keenly looking to set up atomic energy facility in Haryana. Punjab is also strongly on the radar of the government.

According to major EPC construction firms involved in development of nuclear power facilities, complex new technology will characterize the demand of cranes for the projects to come, mostly based on fast breeder reactor stage and advanced heavy water reactor stage. Deployment of the cranes will have to be backed by high levels of erection specialization by the rental agencies for executing the erection jobs, based on complex technology, as is being witnessed in the refinery expansion projects in the country. 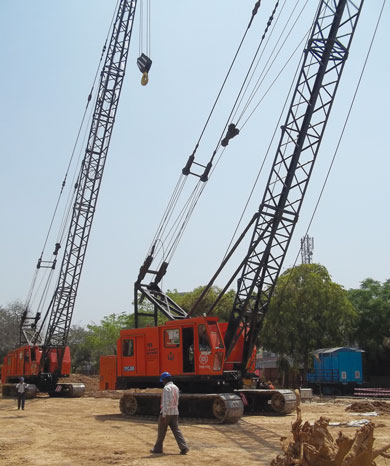 If demand fundaments are to be believed, Delhi-based crane renting heavyweight, Apollo Cranes, is in the process of undertaking a major acquisition. It is in the process of importing 20 second hand cranes of 50-500 tons. The cranes are being imported from Europe and USA. Among the cranes being procured, 150-200-300-400 tons are mobile cranes from Liebherr and Terex Demag. The company will be retaining the medium and heavier capacity cranes, while it will sell off the lighter capacities to other rental agencies in Delhi-NCR region, provided it gets a good price. The company is negotiating to acquire another mobile crane of 500-800 tons.

Proliferation of newer entrants in the rental market of Delhi-NCR in lighter mass crawler and mobile segments like JNPR Infra, MSC Cranes, Vishwakarma Enterprises, Metro Cranes, SP Equipments and GT Innova and S.B. Protech, is likely to create demand for well maintained used units as well as new crawler cranes. S.B. Protech, a major civil engineering contractor in DMRC, has in the recent past acquired one brand new Manitowoc and a Kobelco lighter capacity crawler crane. Both the cranes are working at metro sites. With strong marketing channels, the companies will surely look towards deploying the cranes in new and maintenance of industrial projects in north India.

Open To Acquisitions
Hiring rates are expected to remain stable; this can be assessed from the fact that majority of the medium and large size crane hiring companies are open to acquisitions of both new and well-maintained used mobile and crawler units. While there is no clear indication from the companies where the procured cranes will be deployed in the short and medium term, upcoming energy pipeline projects across the country, expansion of the hydrocarbon sector in the north-eastern part of the country, and proposed 4th phase of Jamnagar refinery expansion are likely to see their utilization.

A new Inspections App that allows customers to rent lifting equipment with confidence is now available at MYCRANE. Downloaded via Apple or Android stores, the free MYCRANE Inspections App helps prevent fraud and reduces risk by digitalising the crane