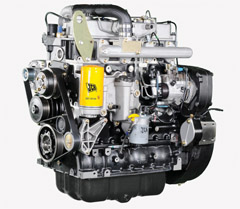 Equipped with state-of-the-art BS111 16 Valve Technology, JCB India launched its own domestically built world class, fuel-efficient diesel engine to power its equipment line with uncompromised reliability and longer life. The engine has been designed and manufactured at the same platform as the world record breaking Dieselmax engines and with this watershed eco-friendly development, the company complies with Bharat Stage III emission norms, thus meeting the national imperative to contain emission and noise pollution.

Speaking about this far reaching indigenous technical development at JCB's end, Managing Director & CEO, JCB India Mr. Vipin Sondhi said that the company is indeed delighted to launch the BS111 Compliant engines in the country. These world-class engines, he added are a testimony to immense technical expertise and work put in by the teams from the UK and India working together. These engines with the latest technology will result in substantial savings in fuel costs for our customers. Soon we will start powering our backhoe the 3DX, our most sought far product in the construction equipment market in the country with JCB engines and in many other models of our products including compaction equipment, wheeled loader etc. To reinforce the customer's confidence, he underlined that the company would offer one year unlimited hours of warranty on Backhoes fitted with JCB engines.

Explaining its features he said, "JCB Engine ecoMAX is the first engine in India that has been developed exclusively for off-highway applications and available with the range of 76hp to 150hp, they are naturally aspirated, turbocharged or common rail. It's a water cooled engine which will be powered by a high pressure rotary pump. The block, bedplate design and crankshaft dimensions are similar to the JCB Dieselmax engines. The cold side has features like 14.5 psi cooling system for increased cooling efficiency, fan belt auto adjuster, 6000 hrs of belt life, oil change period and engine filter change period of 500 hrs each reducing maintenance cost, main filter change period of 1000hrs, state of the art Delphi fuel system. Higher torque will result in increased productivity when the machine is performing loading and dozing applications. By all means, it is going to be a heartening development for the users. Our environment-friendly engines with low noise and vibration and longer engine life will add to customers delight."

Talking about the response to this development from the dealers, Mr. Sondhi said, "our dealers have been very enthusiastic about the engine. Our customers will be delighted to know that they now have a single point warranty from our world-class dealerships. Our dealerships have the highest level of preparedness and are ready to service the engines once they hit the market. Over 1100 service engineers across all 370 outlets have undergone extensive trainings and retrainings in the past few months and will continue. All engine related parts have been stocked at JCB warehouses across India and at dealerships/ outlets."

Earlier speaking about this development, Mr. Amit Gossain, Vice President Marketing & Business Development, JCB India, described it an indigenous development in keeping with JCB's rich tradition of promoting local technology development and marketing. He said, "our dealers were extremely happy when they took part in the seeding program that has helped develop the engine over the past 24 months. JCB Engine ecoMAX has been tested for 50,000+ hours in extreme climatic, terrain and off-highway fuel conditions. Even our customers who helped us out by testing JCB machines with the ecoMAX engine at their sites are very positive about the performance of the engine." 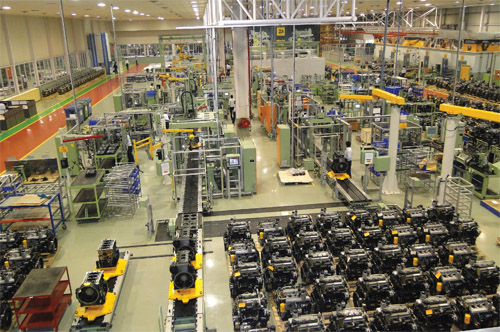 JCB's new engine plant at its Indian headquarter in Ballabhgarh, takes lean manufacturing at its finest levels, NBM&CW took a round of the plant recently.

The new engine plant has been set up with an intention to indigenize the JCB's engines featuring its own standards that would go into its backhoe loaders, earthmoving and material handling equipment. The broader perspective of setting up the new engine plant is to provide myriad value to the equipment and finally the end users. The engineering value has been incorporated in the engines by getting them produced through one of the refined levels of lean manufacturing ever witnessed by NBM&CW.

The engines produced by the plant are ensured that they have almost zero defect levels at the job site at the brand new stage of the machine as well as across its lifecycle so that the customer gets maximum equipment uptime on the capital investment made.

The engine production centre houses an assembly line and a machining line. The manufacturing process of the engines works on the 'no fault forward' production model. In accordance with this, the machine is minutely inspected at its every stage of production encompassing cutting edge technology providing optimum engineering value to the manufactured product. The in process verification of the engine during the production process includes a range of stringent tests. The engine being assembled is passed to the second stage only after it has qualified all the test parameter at first stage. The entire chain of in process verification is completely computerized.

The assembly line which has a conveyor system achieves excellent line efficiency supported by minimal room for buffering. The engine passes through different stages of production. The production system is characterized by sophisticated robotic controls.

Apart from having a compact footprint and well integrated intra plant production line, the world-class engine plant inherits economies of scale facilitating interplant transport of the engine to the main equipment production line. This is on the fact that the Ballabhgarh plant is the production centre of JCB's backhoe loaders which will now be powered by the JCB engine ecoMAX. All in turn allowing the equipment manufacturer pass on value to the customer.

Atlas Copco’s X-Air 850-290 portable air compressor is a drilling unit that is ruggedly designed to meet the needs of the demanding coal mining and water well drilling segments. The X-Air 850-290 is dual pressure – 17 bar (246psi) and 20 bar (290psi)

Kubota ready with engines that can run on alternate fuels

Kubota’s industrial engines comprising the 03-M Series and the other engines can meet varied application needs. In India, it is offering BSIII & BSIV and other countries emission certified diesel engines with a rating of around 9 kw to 90 kw. Engines include

Nakoda Machinery has expanded its engineering and manufacturing capabilities and currently has 3 plants in Ahmednagar, with the 4th coming up in Chakan near Pune. It is now offering diesel portable compressors under the Truecomp brand

Atlas Copco’s E-Air range, including 45KW, 55KW, 75KW, 90KW, 110KW and 132KW offers the most versatile and full range of pressure and flow combinations so that users can experience the full power of electric. The E-Air portable electric compressors

Atlas Copco India is leading the Indian construction, infrastructure, and mining segments with its technologically advanced products, many of which have been innovated by the company. It pioneered the asymmetrical profile

Pneumatech is a compressed air treatment and gas generation equipment manufacturer, under the Atlas Copco Group with a presence across the globe. Its energy-efficient products and services help

Chicago Pneumatic - a part of Atlas Copco group in India – has launched two new product variations in their Permanent Magnet Motor Compressors – the CPMV and the CPVS range. Equipped with a proven energy-saving technology

In the construction industry, producing high quality concrete in the right amount and delivering it on time is a challenging task. The right quality of concrete, produced by the concrete batching plants, increases

MARK Compressors, a part of Atlas Copco Group in India, has launched two new product variations in their Piston Compressor range: the Ironwind series and the Bluewind series. Equipped with a robust cast iron pump and a simple

In residences and commercial buildings, pressure boosting has become an important element in distributing water, especially with the onset of summer, to ensure that a consistent water pressure is maintained

Atlas Copco has set new benchmarks in the portable air compressor segment with the launch of four compressors and extended light tower range. Making the life of drillers easier in key application segments is the XRH 1100 PLUS

Driven by the requirements of OEMs, engine manufacturers are developing solutions that enable fuel efficiency, installation flexibility, ease of maintenance, and above all, enhanced ability to withstand dynamic

Kubota Agricultural Machinery India Pvt. Ltd. (KAI), the Indian subsidiary of Kubota Corporation, has announced start of sales of industrial engines for OEMs in addition to their current product portfolio of tractors