The assignment was clearly defined: develop a suspension system that would make Volvo Trucks world leader in handling and comfort. Realising the target was more of a challenge. Meet the project team behind the world's first, IFS.

The truck industry is conservative when it comes to new technology. For this reason, many people experienced a feeling of "At last!" when the world's first individual front suspension (IFS) with rack-and-pinion steering for heavy-duty trucks – IFS – was presented in 2012.

"Parts of today's leaf-suspension systems with rigid axle members are based in principle on the same fundamental technology that was used in horse-drawn carriages way back in the 18th century. Separating the wheels in the front chassis from one another, so that they can work independently, is a revolution in heavy-duty trucks," explains Jan Zachrisson, the person responsible for the IFS system at Group Trucks Technology (GTT).

Before Jan Zachrisson started work on the IFS system, he was involved in upgrading the existing front chassis with air suspension for the new Volvo FH. With a background from Volvo Buses, he also had previous experience of working with individual suspension systems, as this technology has already been used for almost 30 years in the bus industry.

"Today's front chassis with leaf and air suspension systems are already so good that there isn't that much scope for developing these techniques much further. With the introduction of IFS, we are writing the first chapter in a totally new book and changing the driver's take on what it feels like to drive a truck."

The challenge for the designers was to create a design with several moving components, which would function as a solid unit. This is their solution. 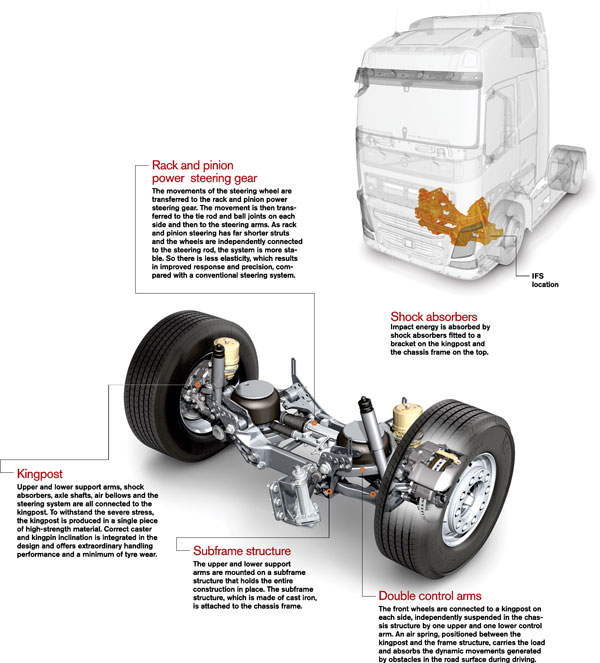 The first prototypes of the system were drawn more than 10 years ago, but it was not until 2008 that the development work really began in earnest. For the past five years, Bror Lundgren and his project team comprising some 15 people have been developing the new technology.

"We were tasked with producing a design that would make Volvo's trucks best in the world when it comes to handling and comfort. As some of the work had already been done, we had a really good platform on which to base our work, but the most important development work – the transition from a concept to an industrial project – still lays ahead," explains Bror Lundgren.

It is no coincidence that Bror Lundgren, with his experience of independent suspension systems in the car industry, was chosen to lead the development work. The basic principle for Volvo Trucks' IFS system is the same for both a car and a truck – suspending the wheels independently makes the vehicle more stable and predictable on the road. 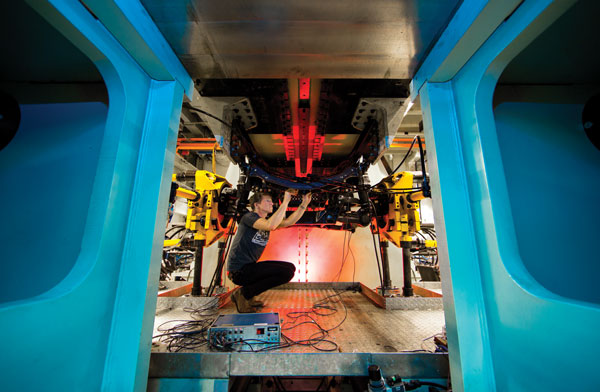 When it comes to the design, however, the systems differ. The greatest challenge facing Volvo Trucks' engineers was space and stiffness.

In a car, the stiffness in the system is created through the body structure to which the axle is attached. This kind of solution is, however, impossible on a truck for two reasons. The first is that the engine is located in the same area as the suspension. The second is that the frame structure to which the system is attached is higher in relation to the road surface. As a result, the natural stiffness in a car cannot be re-created in a truck. The solution is a design in which the moving parts of the system are held together by two sub frames (load-carrying structures) which follow the underside of the engine.

"There must be no lateral movements and so we focused very heavily on stiffening the frame structure as much as we possibly could. When we passed our rig tests and realised that the design was going to function as intended, it was a great victory," explains Bror Lundgren.

Rig tests are an important series of tests that are conducted on the world's largest shake rig at the Volvo Trucks development department in Gothenburg in Sweden.

A system of pistons and cylinders shakes the axle under different loads, subjecting the IFS system to extreme forces in the shake rig. The signals that control the shaking have been collected in the form of data from a test vehicle at the Volvo Trucks' proving ground in Hällered out side Gothenburg.

"At the proving ground, the test vehicle is subjected to a number of gruelling road tests. On the axle, there are a number of sensors that register forces and movements during the tests," explains Bror Lundgren.

By transferring these data and then using them in the shake rig, the conditions at the proving ground can be re-created. The data that are used only simulate the parts of the proving ground where the test vehicle is subjected to the heaviest loads. In this way, the tests are optimised in terms of time, as unnecessary driving and other kinds of down time can be eliminated.

"In the shake rig, we exaggerate the number of loads on the structure with the aim of ascertaining that the system is strong enough," explains Bror Lundgren.

The axle is tested hundred softime in the shake rig during a test period lasting 10 weeks.

"We have a responsibility to our customers and that is to test and keep testing until we are sure that the system is robust and ready for production," says Bror Lundgren.

“In the shake rig, we exaggerate the number of loads on the structure.”Bror Lundgren, project manager IFS

Hoda Yarmohamadi, a project engineer at GTT who has been responsible for making the calculations that determine whether each individual component complies with the rigorous quality requirements, agrees.

"All the components have to last for the whole service life. We have collaborated closely with design/construction and made on-going modifications," she says.

So, what are the greatest advantages of this new technology?

"Its handling properties are quite simply revolutionary, especially on winding roads. As a driver, you can relax in an entirely different way and this creates a totally different feeling of safety and stability compared with a conventional axle," Jan Zachrisson explains.


His colleague, Stefan Axelsson, the person responsible for road performance at GTT, agrees. Drivers who cover large distances are the ones who are going to benefit most from IFS, especially when they drive on winding, swaying or narrow roads.

"The increase in roll stability is the main factor when it comes to the enhanced feeling of safety," he says.

Bror Lundgren makes a comparison between two beach balls to illustrate the difference in feeling.

"With a rigid axle with leaf or air suspension, it feels a though you are sitting on top of the beach ball and you are frequently forced to counter movements with your senses in order to maintain your balance. With an IFS, you are instead sitting inside the beach ball and have greater control of your situation. IFS has a lower roll centre than other axles and this creates an enhanced feeling of safety."

The improvement in steering wheel feedback, which is a result of the rack-and-pinion steering that is integrated in the system – a technology that is also totally unique in the truck industry – is a decisive factor when it comes to the fantastic driving characteristics.

"Compared with a conventional steering gear, rack-and-pinion steering is a more rigid steering system and this results in a more direct response. The time between thought and action is shorter and this further reinforces the feeling of control and safety," adds Jan Zachrisson.

Nakoda Machinery has expanded its engineering and manufacturing capabilities and currently has 3 plants in Ahmednagar, with the 4th coming up in Chakan near Pune. It is now offering diesel portable compressors under the Truecomp brand

Atlas Copco’s E-Air range, including 45KW, 55KW, 75KW, 90KW, 110KW and 132KW offers the most versatile and full range of pressure and flow combinations so that users can experience the full power of electric. The E-Air portable electric compressors

Atlas Copco India is leading the Indian construction, infrastructure, and mining segments with its technologically advanced products, many of which have been innovated by the company. It pioneered the asymmetrical profile

Pneumatech is a compressed air treatment and gas generation equipment manufacturer, under the Atlas Copco Group with a presence across the globe. Its energy-efficient products and services help

Chicago Pneumatic - a part of Atlas Copco group in India – has launched two new product variations in their Permanent Magnet Motor Compressors – the CPMV and the CPVS range. Equipped with a proven energy-saving technology

In the construction industry, producing high quality concrete in the right amount and delivering it on time is a challenging task. The right quality of concrete, produced by the concrete batching plants, increases

MARK Compressors, a part of Atlas Copco Group in India, has launched two new product variations in their Piston Compressor range: the Ironwind series and the Bluewind series. Equipped with a robust cast iron pump and a simple

In residences and commercial buildings, pressure boosting has become an important element in distributing water, especially with the onset of summer, to ensure that a consistent water pressure is maintained

Atlas Copco has set new benchmarks in the portable air compressor segment with the launch of four compressors and extended light tower range. Making the life of drillers easier in key application segments is the XRH 1100 PLUS

Driven by the requirements of OEMs, engine manufacturers are developing solutions that enable fuel efficiency, installation flexibility, ease of maintenance, and above all, enhanced ability to withstand dynamic

Kubota Agricultural Machinery India Pvt. Ltd. (KAI), the Indian subsidiary of Kubota Corporation, has announced start of sales of industrial engines for OEMs in addition to their current product portfolio of tractors

Atlas Copco’s ZT 90-160 air-cooled oil-free screw air compressor is available with fixed or variable speed drive and with or without an integrated dryer. The compressor elements have been adapted to work even more

Doosan Bobcat India Pvt. Ltd. is a subsidiary of the Doosan Group, which took over the global business of Bobcat and Portable Power Business of Ingersoll Rand in 2007. Ingersoll Rand pioneered the introduction