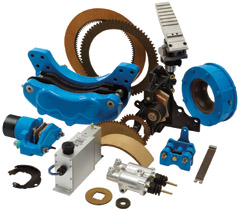 SAHR brakes, which first appeared in the late 1980s, use springs to apply a clamp load on the brake discand prevent unintended motion of the machine. SAHR brakes hold several advantages over mechanical park brakes. First, SAHR brakes simplify the brake system by eliminating linkages and cable pulls, translating into fewer parts for service and maintenance. Second, SAHR brakes are automatic applied, meaning that the brakes automatically come on when the vehicle is shut off while a lever needs to be pulled for a mechanical brake to be triggered.

Carlisle's SA series brakes have taken the SAHR concept to a new level of performance, reliability and quality. Used in varied off-highway industries such as mining, agriculture and construction, the SA series brakes contain a return spring device for centering the caliper on a disc, keeping the brake from shifting while preventing brake drag and premature lining wear. A second unique quality of the SA series brakes is the ease of adjustment, resulting in easy lining changes and quick maintenance. Removing the end cap and turning two adjustment bolts is all that's required. A further advantage of the SA series of brakes is its use of magnets, which pull the brake lining back from the disc. This feature eliminates lining chatter and reduces noise considerably. 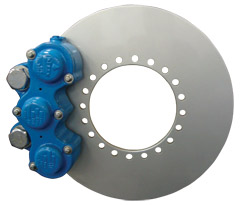 Carlisle SA series park brake reliability is a result of over fifty years of experience in the off-highway braking business and Carlisle's own thorough testing, manufacturing and quality procedures. All SA park brakes are subject to testing on an inertia dynamometer, a test which simulates the movement and energy of the intended application vehicle.

Twelve years after Carlisle launched the first SA park brake, two more brakes in the SA series are now available. The SA2500, which possesses lower release pressure and less clamp force, and is the smallest and lightest member of the SA series, is ideal for telehandlers. Additionally,a modified version of the SA7000, a low pressure version, has been added to the product family. The latest SA brake is the SA14000, which, with its dual pods, doubles the clamp load while the release pressure remains the same as the SA7000. The SA14000 is a good fit for articulated dump trucks and rigid construction trucks up to 60 tonne. 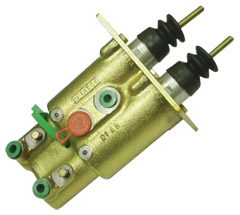 Carlisle entered the off-highway braking market in 1990 with the acquisition of BF Goodrich's pioneering off-highway division in Bloomington, Indiana. BF Goodrich created the first braking solutions for large mining vehicles in the 1950s, thereby paving the way for today's trucks that can in some cases reach weights of 100 tons with loads of up to 400 tons. Soon after BF Goodrich produced its first brake for the mining industry, Goodyear, which along the way was bought by first Rockwell and then Arvin Meritor, also entered the off-highway braking market. Carlisle went on to acquire Arvin Meritor's off-highway braking division in 2005. The acquisition of the Hawk Corporation in 2010 enables Carlisle Brake & Friction to offer a complete line of the most dynamic friction products available to the market today .The resulting merger helped Carlisle grow to be the largest off-highway braking company in the world, boasting unrivaled engineering competencies and a full suite of braking products.

Carlisle Brake & Friction serves the construction market with complete braking solutions, from the pedal, or hydraulic actuation components, to the friction materials of the brake system, be that a dry or wet braking system. Carlisle has been a supplier of high quality caliper braking products since the inception of caliper style brakes for off-highway vehicles in the 1950s. Since then, as vehicles have grown in size, Carlisle has innovated with customers to supply calipers, including service and park brakes for vehicles up 400 tonnes.

Carlisle Brake & Friction Headquartered in Solon, Ohio, with over 1,800 employees worldwide with manufacturing facilities globally located in the US, UK, Italy, India, China & Japan. Carlisle serves over 100 leading original equipment manufacturers in 55 countries, making Carlisle the right choice for your new brake or friction design, no matter where you are in the world or what you want to be.

Manufacturer of excavator parts, Axle Shaft India has increased its range of products, including attachments like rock breakers for use in mining and road construction projects. Says Vikrant Soni, CEO, Axle Shaft India

Bolt tensioning is now the preferred method of tightening bolts and studs on all critical applications. Bolt tensioners are designed for operation in a wide variety of applications including pipeline flanges

Crane wire manufacturer Kiswire is expanding its market presence in India with a range of premium products, along with sound service and product support. Informed Ajit Vikram Singh, Senior Manager- Sales and Sector

Trelleborg has invested substantial resources for the development of new lubrication management technologies through a deeper understanding of the functioning of hydraulic fluids within a sealing system. By designing

Italian company UFI Filters that started in 1971, has expanded globally over the years to become one of the world's leaders in filtration with its 16 industrial sites, 3 innovation centres and 54 commercial offices

SGO's technology for maximizing performance and efficiency of self-lubricating bearings

The right mix of features, performance, reliability, minimum downtime and low cost of ownership are driving customer choice in Wheel Loaders and Tippers. The management of innovation for large OEMs in this industry

Greater utilization of cranes due to tighter work schedules and subdued hiring rates, especially in the lower and medium equipment class, is driving crane OEMs to look for solutions that enable higher availability

Component manufacturers are forming a close association with OEMs to meet the higher performance standards of equipment. P.P. Basistha takes a look. Demand by OEMs for components such as hydraulics, transmission

AVTEC, one of the largest independent manufacturers of powertrain and precision engineered products in India, introduced a 1200 hp heavy duty transmission for 100T mining dump truck and Oil Field

Bonfiglioli, designer, manufacturer, and distributor of a complete range of gear motors, drive systems, planetary gearboxes and inverters, is in the process of strengthening its research and development

VMT International is part of the 60-year-old Verhoeven Group - a well-established Dutch company engaged in the construction industry. VMT is seen as a global player due to its international

Burner India, established in 2001, is a total solutions provider in the field of Pressure Jet Oil Burners & Blowers of all capacities, for use in road construction, rolling mills, chemical, pharmaceutical and other

With the changing demands and arduous environment, customers are looking for products that can reduce the costly repairs and perform better in the demanding operating conditions. Trelleborg Sealing