Heavy truck designers and manufacturers in Canada and in the United States are all talking about the latest trend that promises to both improve and challenge the trucking industry. It includes finding new ways to reduce engine emissions while maximizing fuel economy.

In Canada, the industry is working together to popularize "enviroTrucks" that reduce fuel consumption and greenhouse gas emissions by utilizing the latest technologies. And in the United States, truck builders are focused on meeting new Environmental Protection Agency (EPA) regulations that address diesel engine emissions and idling times.

One way OEMs in the industry are building better trucks is by challenging suppliers to design components and sub - systems that reduce weight and improve fuel economy. When those suppliers can also provide products that lower cost, reduce inventory and simplify installation, partnering with them is n't just good for the environment — it's also good for business.

At The Timken Company, a global friction management and power transmission solutions provider headquartered in Canton, Ohio, engineers are constantly looking for ways to improve overall system performance through smart bearing design. One of their recent innovations for trucking and off - highway pinion and differential shafts is the threaded cup bearing. 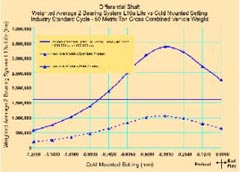 This figure shows the bearing system life vs. bearing setting. The new axle model has a life bogey of 1.6 million kilometers. After applying Timken® High performence bearings to the new model, the weighted average system life improves by 3.4 times. The high performance bearings also reduced axle weight and improved performance, resulting in benifits that can include lower initial axle costs, increased fuel economy and less adverse effects on the environment. These are predicated results derived from product testing. Results will vary depending on a number of factors, including the application and the operating environment.
The threaded cup was originally designed to eliminate early service warranty problems occurring on heavy truck differential shafts, when the originally - specified transition cup fits would come loose and turn, causing the housing to wear. The threaded cup design eliminates the turning cup, and its design also results in more benefits — it can improve fuel economy, reduce parts and inventory costs, and simplify differential shaft assembly.

"On differential shafts in the traditional bearing cup design, two standard - tapered - single bearings are split - fit in the housing using threaded cup followers for bearing and gear mesh adjustment. The design also included separable locking devices with fasteners to prevent the followers from unthreading," says Glenn Fahrni, principal application designer at Timken. "Because the differential shaft requires an adjustable cup, the cup fits must be originally - specified as partially loose in the housing. This causes the cups to eventually work themselves loose rotationally until they begin wearing on the cup adjuster and housing."

"To provide an anti - rotational feature, we weld a low - carbon sheet metal ring to the carburized cup's backface," Fahrni said. "Timken has been issued a patent for the threaded differential bearing cup."

By combining the individual components of the traditional cup design into one, the threaded differential cup offers less complexity because there are fewer parts to inventory and handle during axle assembly. The result is easier and quicker assembly and less time spent adjusting the bearings and gear mesh.

"By combining clean steel, smoother surface finishes and special raceway profiles, we've been able to integrate several traditional components into the threaded cup bearing, making it capable of handling heavier loads without making the bearing bigger or heavier," Fahrni says. "It's what we call power density – increasing the bearing capacity - to - weight ratio, so that a smaller bearing can carry a greater load."

Currently, Timken engineers are investigating the usage of a threaded cup bearing on the pinion shaft.

"On the pinion shaft, to correctly adjust the traditional pinion bearings the axle OEM has to keep anywhere from 40 to 55 different sizes of a variable length cone spacer at their assembly station," Fahrni says. "How the pinion head and tail bearing tolerances stack up determines which spacer size is used."

According to Fahrni, rolling torque is used as the bearing setting measurement method, and the tight - fitted cones are clamped through the spacer with a nut tightened to a very high clamp torque. If the wrong spacer size is initially used, you have to teardown the pinion shaft and rebuild with another spacer size.

Teardowns involve loosening the nut and pulling off the outer tight-fitted cone — a time - consuming process. Sometimes two rebuilds are required," Fahrni says. "A threaded cup on this shaft would result in only one fixed - length cone spacer size being needed and no production teardowns or rebuilds."

INGECO: Offering Custom-Made Gears for a Wide Spectrum of Applications

Topcon Sokkia India (TSI), a 100% subsidiary of Topcon Corporation, Japan, provides its Information and Communication Technology (ICT) solutions to the Construction Industry which includes the adoption of Automation system in design, construction, operation

Debtronics’ Concrete Mixing Control Panels offer precise weight, reliability, energy efficiency, and minimal maintenance. The panels are easy to use as many processes are totally automized, so that a single press of the switch starts the operation, thus reducing human

Gessmann Controllers India Pvt Ltd is a 100% subsidiary of Gessmann Germany and is a Global leader in providing a complete package of multi-access controllers, joysticks, and associated products, in line with Gessmann’s offerings to global brands in the Electro Hydraulic

Bonfiglioli India’s advanced range of gears and drives for the off highway equipment showcase the company’s capability in meeting demand for drives for tracked equipment of 1.5 to 1,500 tons, variety of road construction, concrete, mining and material

Flexiflow Industries specializes in the production of Hydraulic Hoses, Screening Media, and Silo Whip Machines. It produces a full range of woven wire mesh and anti-clogging screens in grades AISI 304, 321, 316, 316L and high carbon, which

At Excon, COBO displayed for the first time its new “ECO HE” instrument cluster, which is a further evolution compared to the actual “ECO” line, now comprised of 4 variants. “ECO HE” is equipped with plenty of enhancements including but

Manufacturer of excavator parts, Axle Shaft India has increased its range of products, including attachments like rock breakers for use in mining and road construction projects. Says Vikrant Soni, CEO, Axle Shaft India

Bolt tensioning is now the preferred method of tightening bolts and studs on all critical applications. Bolt tensioners are designed for operation in a wide variety of applications including pipeline flanges

Crane wire manufacturer Kiswire is expanding its market presence in India with a range of premium products, along with sound service and product support. Informed Ajit Vikram Singh, Senior Manager- Sales and Sector

Trelleborg has invested substantial resources for the development of new lubrication management technologies through a deeper understanding of the functioning of hydraulic fluids within a sealing system. By designing

Italian company UFI Filters that started in 1971, has expanded globally over the years to become one of the world's leaders in filtration with its 16 industrial sites, 3 innovation centres and 54 commercial offices

SGO's technology for maximizing performance and efficiency of self-lubricating bearings

The right mix of features, performance, reliability, minimum downtime and low cost of ownership are driving customer choice in Wheel Loaders and Tippers. The management of innovation for large OEMs in this industry

Greater utilization of cranes due to tighter work schedules and subdued hiring rates, especially in the lower and medium equipment class, is driving crane OEMs to look for solutions that enable higher availability