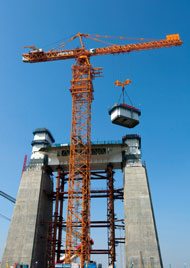 MBEC Company which has been designing and constructing most of the bridges in China since Dec.31, 2009 has deployed Zoomlion's largest top slewing, self-erected model D5200-240 model which won the cut throat competition amidst the internationally reputed crane makers, at the Maanshan Yangtze river bridge project which will play a vital role in the continuing economic development of Wuhan and Hubei Province as a whole. The contract was won largely because of the Zoomlion's unmatched technical background, perfect design solution and manufacturing capability.

Lifting the main sections of the bridge has been a particular challenge and hence the D5200 was specially developed for lifting huge prefabricated elements for this project. In the beginning of 2012, D5200-240 successfully lifted the 230 ton section to 205m high for the bridge construction project thereby making two world records. Shortly after that this Model D5200 was transferred to the construction site of Yingwuzhou Yangtz River Bridge and played a key role there. Engineer Zhimin Zhou, the equipment Director of MBEC said, "the equipment is very important for the bridge construction as they directly affect the structure design, construction style, efficiency and project cost and the use of D5200 offer improved efficiency with reduced cost and adding to the core competitiveness of the Zoomlion."

The unmatched and sterling performance of D5200 in Maanshan Yangtz and Yingwuzhou Yantz Bridge projects has attracted the attention of internationally acclaimed developers/contractors and media.