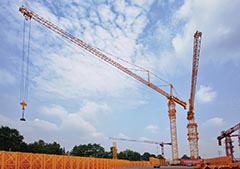 Zoomlion’s D1250-80 tower crane with the longest boom (110 m) in the world reporting a major breakthrough for the core technology of extra large tower crane manufactured so far. With its leading overall performance, the crane will play a key role in the construction of national key projects and landmarks. With its accomplishment, extra large tower crane’s industry will no longer be dominated by European brands. It was announced “the tower crane with the longest working radius” after Guinness world record adjudicator measured its effective working radius at site.

D1250-80 is another record-challenging masterpiece of Zoomlion after D5200-240, the upper rotary tower crane with the biggest load moment worldwide. Extra long boom and characteristic structure enable it to have a big working radius and high working efficiency while being safe and stable.

By presenting D1250-80 tower crane, Zoomlion has solved Construction Hoisting problems of light-weight design boom at big working radius and accurate control of mechanism through a series of technological innovations. Double-stage entering variable cross-section boom system as invented by Zoomlion has improved the sideway stability and hoisting capability, enabling it to lengthen the working radius to 110m, covering an area of over 5 football courts, and have a maximum hoisting capacity of 80t, an improvement of 26.9% as compared to the load moment tower crane of the same level. What used to be the working radius and work amount of 3 tower cranes can be easily achieved by it alone now. High efficiency is guaranteed by Zoomlion’s patented technology of rotation self-adaptation control with the adoption of constant-power modulation for the hoisting, luffing and rotation mechanisms, making it possible to move objects of 6t by 220 m. Real time monitoring of all mechanisms is also realized through another innovation of Zoomlion, crane monitoring system which intelligently diagnoses system failures and improves overall stability. In addition, the first animated installation manual is created by Zoomlion in developing D1250-80, making crane installation quicker, easier and safer.

In 2010, with the debut of D5200-240, the largest rotary tower crane worldwide developed by Zoomlion, the top market of extra large tower crane was no longer ruled by European brands. In June, 2011, Zoomlion imported the technology of flat-top tower crane from German Company JOST, and integrated it with the technology of its own regarding product development, technological revolution, new material application, etc. Apart from that, Zoomlion attaches great importance to innovation, with a particular emphasis on primitiveness of innovation, integration with imported processes and innovation after assimilation of imported technologies. Success of D1250-80 is not only a technological overtake, but also a fine indicator of core competitiveness. It manifests Zoomlion’s topmost tower crane researching and manufacturing capability around the world, its pyramid position in design and manufacture of tower cranes globally, and its leadership in technological development in tower crane industry domestically and globally.

The birth of D1250-80 is a milestone in the promising course of development of Zoomlion Construction Hoisting Machinery Co., Ltd. Its not only a world-record breaker, but also highly accepted and praised by the market. According to the latest news, upon completion, seven cranes have already been ordered.