Two Comansa Cranes for the "New Windsor"Tower in Madrid 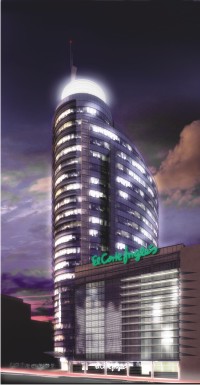 GRUYMSA, official dealer for Linden Comansa, has rented two cranes for the construction of a new building in Madrid's business area, for Spain's No 1 department store group "El Corte Inglés". This new building, located near the city's most important street, the ‘Paseo de la Castellana', will substitute the old "Windsor"tower. It will be 22-stores high, will have other 5 for underground parking, and will host the enlargement of one of the biggest shopping centers from "El Corte Inglés."

This 103,7 meter high landmark building will open in 2011, and will host a 7-store shopping centre, 11 stores for offices and other 4 technical stores, for functional machinery: elevators, air conditioning, etc. For this construction, which started at the beginning of this year, the works are counting on one 21LC550, with 18 tonnes of maximum load, and one 5LC5010, with a maximum load capacity of 5 tonnes. 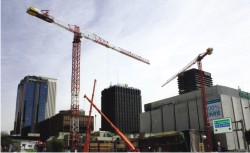 The 21LC550 has been erected at a heigth of 69.3 meters, but it will grow with the building, until it reaches a final height of 130 meters. This model can be mounted with an 80 meter-long jib, but for this job it has been erected with a 60 meter jib, with a load capacity of 9,000 kilos at its end.

Gruymsa, with more than 300 cranes, is renting machinery to many top level works, like this "El Corte Inglés"tower, as well as the construction of the Spanish headquarters of Coca-Cola, in Madrid's "Campo de las Naciones"business area.