The Managing Director, Spartan, Vikram Mehta, during an interaction with NBM&CW informed that the company has been supplying Tower Cranes of various sizes, models and capacities for construction and infrastructure sectors for the past three years. During such a short span, it has gained overwhelming trust and confidence of its customers. This could perhaps be the reason that construction major M/s. Nagarjuna reposed its trust in the company and gave orders for supplying custom made 50M.T capacity crane, with an unsupported mast height of 110 meters. This crane has a tip load of 9 M.T at 60 meter radius and is rail mounted. Similar was the case with M/s. KEC, which ordered a 90 meter high free-standing crane with a jib of 60 meter for the assembly and testing of transmission towers, he explained.

He said further that Spartan's regular supply of tower cranes for the construction & infrastructure industry covers the entire gamut of stationary cranes (up to 400 meters height), inner climbing cranes, rail mounted cranes, and stationary skid mounted cranes. The jib length offered in the cranes varies from 40 meters to 70 meters and the tip load may vary from 1 M.T to 10 M.T. The company was the first to introduce the economical top‎less types crane with full VFD drives and PLC controls. He further informed our customer's response for such cranes with multiple safety mechanism including the load moment indicators, overload safety, Eddy current motors was extremely rewarding. So much so that the company is currently supplying 7 to 8 cranes every month across India, he claimed. 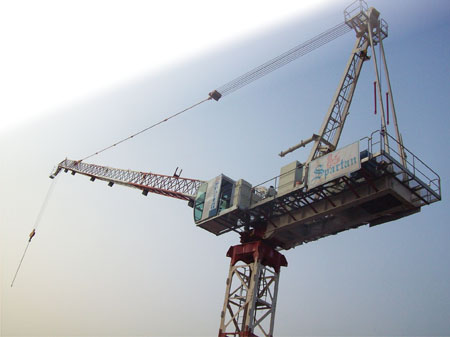 Explaining the reasons behind its fast expanding business across the country, he revealed that Spartan fulfills customers requirement sharp on stipulated time, it has round the clock after sales service support without which even the best crane will become useless. In view of this, M/s. Sri Ram Mills awarded Spartan the order of 2 luffing jib cranes. That apart, Spartan was the first to bring to India economical luffing jib cranes and they are surely going to be very popular in most of the metro cities due to innumerable restrictions on job sites. It is largely due to its unmatched support and services that the company enjoys a strong association with construction giants including L&T, Gammon India, Shapoorji Pallonji, Nagarjuna, DLF Laing O'Rourke and Simplex, among others.

To offer complete satisfaction to the construction companies, Spartan has started its sales and service offices in Mumbai, Delhi, Pune, Ahmedabad, Kolkata, Chennai, Bangalore, Cochin, and Hyderabad. These service offices have been equipped with all facilities to offer unfailing round the clock services to its customers, he concluded.