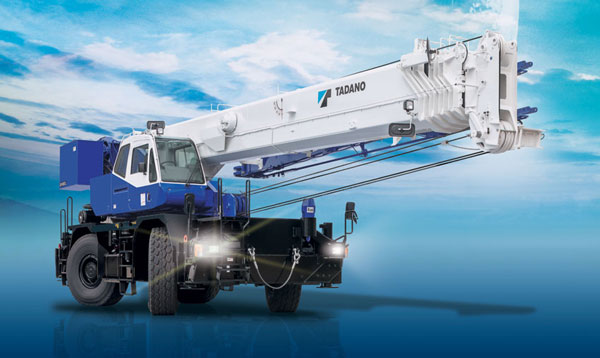 Rough Terrain cranes' manufacturers are looking to widen their product offerings as the market shows indications of fresh equipment off take.

Upcoming Greenfield refinery projects, coupled with expansion of existing ones, is making Rough Terrain (RT) crane manufacturers to look for new business opportunities. Manufacturers also see spurt in demand of the equipment from metro railway construction, jetty and bridge projects coming up on reclaimed land. Although, the size of the RT cranes remains modest, manufacturers see the demand remain stable. Looking forward to widen the market size, manufacturers are widening their product offerings, backed by awareness on the application of the units.

Expanding its range of RT cranes, Tadano India has recently launched right hand drive 50ton, GR-500EXL, RT crane which has a special feature of longer boom in its class of machine with single cylinder. Tadano manufactures RT cranes between 12-145 tons.

Mr. Chihiro Nishida, MD, Tadano India says, "Tadano owns the privilege of manufacturing GR-1450EX, the biggest in the world and no other manufacturer makes this size of crane elsewhere in the world. We believe such a large range of RT cranes will give Tadano an advantage and we can command our leadership in India as well. This is based on the fact of job becoming bigger in size."

He says, "RT cranes are generally popular in the areas where they are required to work in confined and enclosed projects due to its limitation of non-permissible axle loads. Currently, these cranes are used in metro rail projects, refineries, setting & maintenance of cement plants, fertilizer plants, and bridge construction. We expect that huge requirement will be generated once the government moves various projects on fast track particularly the Smart Cities ones. We see fair demand of the cranes being generated by government projects. Tadano's range of RT cranes is adequate to meet with these demands and applications."

Accepting the fact that with higher exchange rates, getting the cranes manufactured in Japan is necessitating the company to bring the cost of the cranes down while retaining the advanced quality. Mr. Nishida explains, "Any manufacturing process within the engineering industry requires cost to remain economical for them to be competitive in the market. The cost control is an ongoing process in any manufacturing unit in the world; we also take various steps to reduce the cost. However, all such initiatives are basically driven by the fact of our basic core values: Safety, Quality, and Efficiency (SQE)." Tadano India supports its cranes through its own service engineers. The company will expand its operations and network as the population increases.

Sany India is looking to spread awareness for its RT cranes both among the corporate institutional buyers and crane rental agencies. "We are looking to promote our RT cranes to the government bodies for their captive maintenance jobs. In the recent past months, a majority of refineries and power plants are undergoing expansion, where we see the sector creating fair demand" says Mr. Deepak Garg, CEO, Sany Heavy Industries India.

According to Mr. Garg, "The boom of our RT cranes comes with advanced 'U' section which makes them rugged and enhances bending strength. Our 75 tons cranes come with extended five sections, 45 meters telescopic boom, whereas 55 tons come with 34.5 meters boom length. These make the cranes suitable to undertake various applications in metro projects, cement, fertilizer, mining or refining industries where the process equipment are located at higher heights." 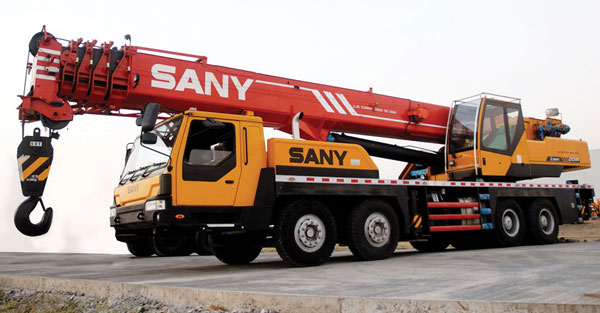 The crane features Safe Load Indicators with warning alarms and stability through auto levelers. This level then outriggers automatically on undulated job sites.

Mr. Garg adds, "Our cranes come with a main and an auxiliary winch which enables them to undertake multiple functions at a time, necessary in metro projects, for example lifting of concrete buckets and precast concrete sections. Higher mobility makes them economical to own and operate."

Parts support to the RT cranes is provided through Sany's mother warehouse in Pune and supporting warehouses. Maintenance support is rendered through service engineers available across the country. Mr. Garg mentions, "We'll look to bring the cost of the RT cranes down by starting the process of local assembly. We have laid down an elaborate localization plan, based on which, we will be carrying indigenization of the cranes in phases."

RT cranes are usually meant for job sites with unstable ground conditions. The inherent features of these cranes to remain stable make them suitable for the jobs on sites with Rough terrains. For instance, they are suitable for refinery and thermal power projects. The better ground clearance of the cranes makes them ideal to work on unstable job sites.

Escorts Construction Equipment (ECE) has recently developed its new 40 tons rough terrain cranes. Sharing details of the cranes, Mr. Rajinder Raina, GM-Marketing, ECE says, "The new 40 tons rough terrain cranes cranes are highly stable on finished surface & also on rough terrain. Green field projects where the terrain is levelled/finished only after a particular stage, our rough terrain slew cranes provide a safe solution. Lifting areas with limited scope of accessibility find the right fit in these cranes because of the short wheel base, 360° continuous slew, all wheel steer and crab steering. There one cab to drive & operate from with high visibility. Further, for setting up the cranes minimal area is required."

According to Mr. Raina, "ECE's rough terrain cranes are fitted with imported components from renowned global manufacturers. This makes our cranes reliable and strudy making them suitable for diverse applications in industries projects, general infrastructure and mining." ECE will be adding newer features in the cranes. The company offers 20 and 30 tons rough terrain cranes. 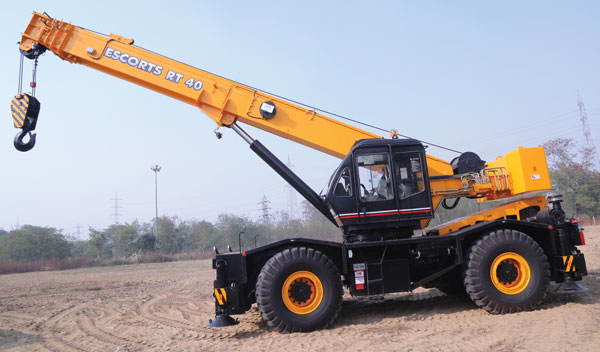 XCMG has recently sold one 100 tons rough terrain crane to crane rental agency. The crane will be used for carrying out maintenance jobs at cement plants. Mr. Hrishikesh Kulkarni, Director Marketing, XCMG India say, "Our range of rough terrain cranes for varied applications. The range comprises between 50-60-70-100-130-200-250 tons. The cranes are much suitable for bigger refinery and power plant projects coming up in India. Our rough terrain cranes comes with advanced suspension and hydraulics. This results toward higher productivity and uptime over normal truck cranes."

XCMG distributes its cranes through its two dealers in India - Syncon and Shenhang Machinery for Private customers & m/s Stork International for Government tendering Business. The Chinese construction equipment major has its own mother warehouses with spares worth INR 5-6 crores at Barwai Near Navi Mumbai. XCMG's dealers have warehouses in Navi Mumbai, Chennai and Panvel near Mumbai. The dealers stock fast moving parts at their warehouse facility. 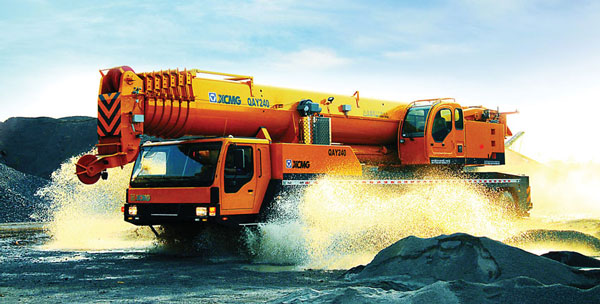 Many of the upcoming infrastructure or industrial projects are based on modular design concepts. The ability of RT cranes to deliver better traction can make them suitable to move with the precast concrete girders or individual equipment of varied capacities within the sites. The manufacturers of the cranes have to take the onus to spread the awareness of the application orientation of the cranes. This has to be backed by right product support.