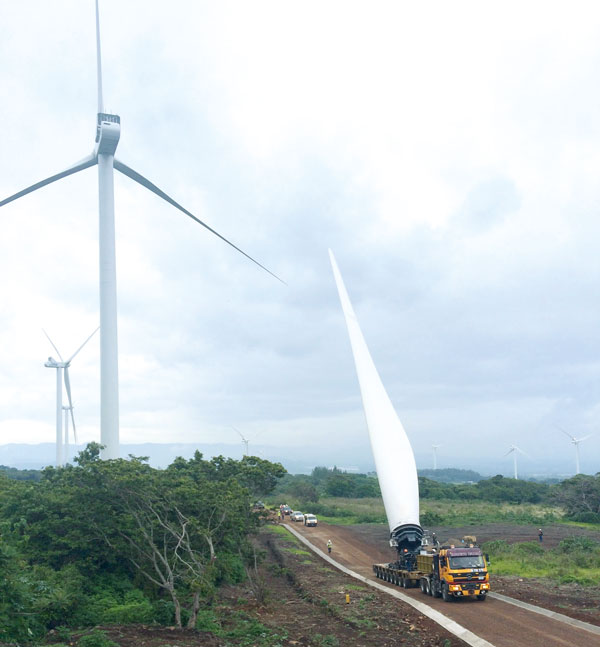 India plans to add collosal 60,000 mw wind power capacity by 2022 from present level of 23,000 mw. Buoyed by the opportunities, major wind power equipment manufacturers, involving Inox, Gamesa, Vestas, Enercon and Suzlon are enjoying execution of large number of projects across central, western, and southern India. Gamesa has bagged 250 and 300 mw wind power order from Orange Renewable and Greenko for installation at Southern, Central, and Northern India. Inox Wind Ltd. has been given orders for 100 mw and 50 mw wind power project by Ostro Energy and Gujarat Mineral Development Corporation in Central and Western India.

Based on large scale planned projects executions, demand for new economy transport solutions in terms of volumes, featuring advanced technical attributes is bound to rise. Requirements of more value based transport solutions is expected on the backdrop of the emergence of newer design standards of the windmills. The new generation windmill features longer towers between hub heights of 90-120 meters with diameters from 3.8 to 5.4 meters and heavier nacelles from 72.3 tons to 106 tons by wind turbine manufacturers. To get speedier winds, for producing more power, turbine manufacturers has been increased hub heights in last seven to eight years from 30 to 50 meters followed by 72-80-90-100-108 and 120 meters recently. With increment of heights, power generation capacity of the mills has gone up from 250 kw- 1.5 to 2, 2.1 and 2.5 mw at present. 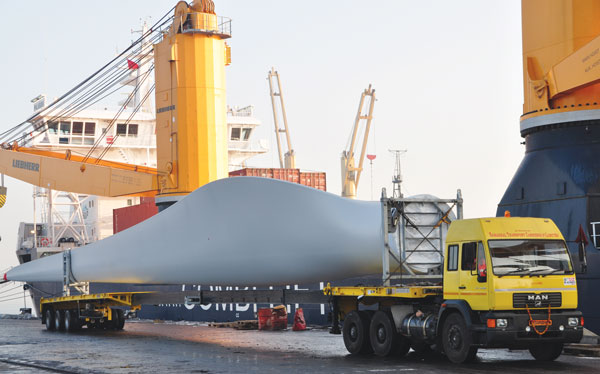 Taking note of undulated road conditions, that is well likely to be countered by wind mill parts transporters in India at par with global counterparts, Goldhofer has developed FTV 300 rotor blade transport device, for transportation of rotor blades, on twisting mountain roads with tight bends. FTV 300 holds the turbine blade at the hub connection and can tilt it up to an angle of 60° so that it can be transported in a semi-upright rather than horizontal position. The FTV 300 is mounted either on a modular trailer or on a Goldhofer self-propelled modular transporter. According to Goldhofer officials, "Adapters are available to handle the various types of blades and ballast elements to cope with differences in blade weight. So as to minimize the area exposed to wind in all phases of the journey, the pitch angle can be adjusted by rotating the blade around its axis to any position. The FTV 300 can be installed and removed without using a crane." 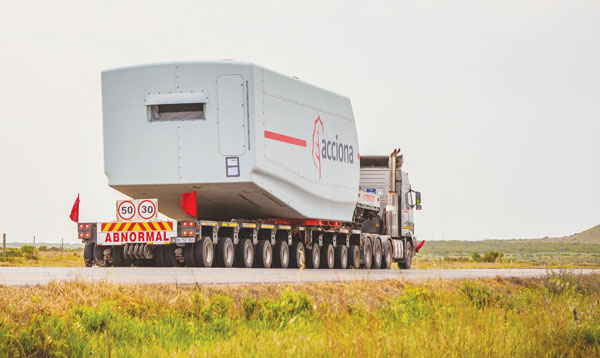 Advancements have been carried out by Goldhofer for moving longer and heavier tower sections. According to the officials, "For transporting heavy tower sections, our new RA4 tower adapter, can handle payloads of up to 180 tons. With the free-turning feature and the resulting high degree of flexibility, even the tightest bends and obstacles up to 3 m high can be negotiated. That means all leading brands of tower segments can be transported without any problems. For lighter tower sections, we offer RA2 and RA3 adapter. Offshore sections with more than 180 tons can be transported on the Goldhofer proven heavy-duty modules."

The company which is present in India over thirty years is also looking for gaining recognition with the windmill parts transporters on its range of solutions for transporting hubs and nacelles. The company official says, "For transporting turbine hubs, Goldhofer has a whole range of vehicles that are designed to take the weight. The normal solution will be to employ one of Goldhofer’s tried-and-tested drop-deck vehicles to ensure compliance with regulations for maximum load height, which is 4.2 m in most countries. Suitable vehicles include the STZ-VL with steering knuckle axles with pneumatic suspension, the MPA-V with McPherson independent suspension and the STZ-VP with pendular axles, as well as heavy-duty modular trailers and self-propelled vehicles in the THP and PST series, which can be configured with various low-profile drop decks for the optimum solution for every hub and nacelle."

The official adds, "Goldhofer also offers a wide range of low loaders with various axle systems for transporting nacelles safely and efficiently. For nacelles with a weight of over 100 tons, the low loader semitrailers in Goldhofer’s STZ-P series as well as its heavy-duty modular trailers (THP) and self-propelled vehicles (PST) really come into their own."

Mentioning further, the official says, "Our design engineering department analyzes the requirements on the various markets and develops customized solutions. A case in point is the THP/MI series of modular trailers, which Goldhofer has developed specially for the Asian market. With the THP/MI axle lines designed to comply with national regulations, Indian companies can be sure of obtaining transport permits easily. Since all THP/MI modules are compatible with the THP/SL modular system and all Goldhofer accessories, individual combinations and additions to the axle lines remain as simple as ever. The lightweight versions of Goldhofer’s THP modular system, namely the THP/SL-S and THP/SL-L, with their extremely low deadweights and high bending moments, are also an alternative for both on-road and construction site operations particularly in the transport of heavy-duty wind power components." 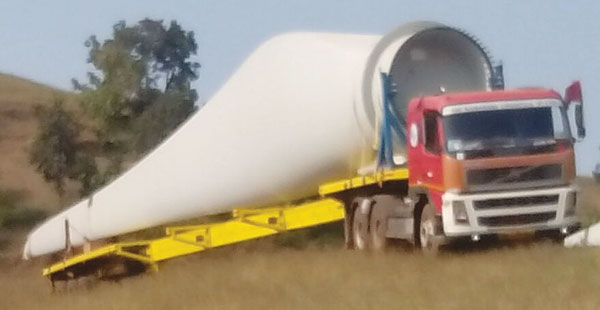 Transportation of blades is a major solution, Goldhofer is looking to enlarge its expanse in India. The official mentions, "Goldhofer offers a series of special vehicles, including its Europa triple extender. This flatbed semitrailer, which is a huge success in Europe, has now been modified for the Indian market and the rotor blades in use there so as to produce a vehicle that is in a class of its own with regard to the price/performance ratio. With this trailers, our customer can transport blades with approx. 70m length."

Usage of extendable trailers of 42-55 meters is relatively new in India for moving blades from 24.5 to 45 meters. These were moved in locally made, conventional tractor trailers six years ago. However, with increasing advent of foreign turbine manufacturers in India, setting standards for safe transportation of the sensitive blade sections, transporters are acquiring extendable trailers in sizeable numbers. However, affordability has been an issue to procure foreign made extendable and hydraulic modular trailers.

He adds, "Looking forward to provide cost competitive indigenous solutions for wind mill parts transporters, we manufactured prototype and eventually carried out modifications, based on customer feedback in the hydraulic axle modular trailers, featuring stability for safe cargo movement both through uniform and undulated roads."

VMT makes hydraulic axles modular trailers from 2 to 6 axle lines with gross weight of the trailers ranging from 36 to 108 tons and with payload carrying capacities from 28 to 84 tons. The company is a major supplier to prominent Indian wind power transporters including South India based Namakkal Transport co.

Based on requirements of safe transport of blades and other windmill parts, Industrie Cometto India has entered into engineering tie-up with Chennai based Sneritc Engineering. Mr. Ramesh Balan- Head Business Promotion, India, Cometto says, "Sneritc will design and make jigs and fixtures as per the requirements of transporting single or twin blades on the extendable trailers. It will also provide technical support services for selection of the loading position based on the centre of gravity to transporters. Further, it will render complete support services to transporters." Cometto India has sold close to fifteen extendable trailers in the last few months to wind mill transporters.

Mr. Balan says, "Our extendable trailers feature high levels of reliability, safety and extended life. This is because, our trailers are made of high tensile steel two inches longer than our competitor solutions. This in turn provides, right stability to the unit, while transporting sensitive wind mill blades."

Undulated road conditions and shorter turning radius at sites is a major issue countered by transporters. According to Mr. Balan, "Owing to the constraints, there has been recent enquiries for adapter based solutions for transporting tower sections and blades."

With commissioning of wind power projects going up in India, there will be commensurate growing requirements of newer value based erection and transportation solutions backed by adequate product and services support.