Relief in Sight for Delhi based Crane Rental Agencies? 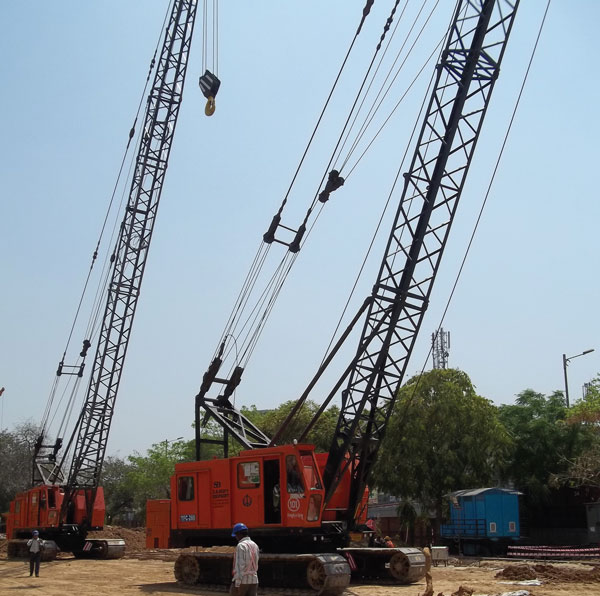 Numerous factors may contribute towards appreciation of medium and higher capacity cranes hiring rates. However, the movement may not be sharp. P.P. Basistha, analyses the recent evolving trend of the predominantly second hand crane usage market of Delhi and National Capital Region.

The very recent deployment of one Demag AC 1600, 650 all terrain crane by Appolo at Sarojini Nagar, metro construction site of Delhi Metro, can be considered as a major feat of Delhi based crane renting agency in recent years. The fully loaded crane, will be using its super lift counterweights to lift sections of the tunnel boring machines, weighing 75-85-107-121 tons. The crane will totally undertake 15-16 heavy lifts. This could be more based on the requirement of the client.

Critical heavy lift construction jobs of Delhi Metro Railway Corporation (DMRC) taking place in its second and third phase, notably of lowering and raising sections of tunnel boring machines, have been dominated by Mumbai based crane renting majors. Who are enjoying a domineering presence towards supporting construction of underground stations and corridors. The major recent example is of Mumbai based crane renting heavy weight Oasis, deploying its, Liebherr, all terrain crane with super lifts for lowering TBM sections for construction of underground IIT station connecting Hauz Khas. Deployment is also carried by All Cargo at DMRC projects.

Major presence of the outside crane agencies in Delhi-NCR, in medium and heavy lift category, coupled with subdued hiring rates and delayed payments in the recent past have hindered business expansion of the Delhi based crane renting agencies in Delhi and NCR. The situation is similar in the lower category cranes segment. Hiring rates remaining extremely subdued due to oversupply of units in the category, due to major equipment acquisition by existing firms and entry of new players, during the boom period of 2009-10 and even further when slump set in the market.


The recent years have witnessed spurt of good number of newer entrants in the rental market of Delhi-NCR, in lighter mass crawler and mobile segments. The new entrants are JNPR Infra, MSC Cranes, Vishwakarma Enterprises, Metro Cranes, SP Equipments and GT Innova. GT Innova and SP equipments have deployed 1 each Tata TFC 280, 80 tonnes crawler crane at package CC27 Munirka site of DMRC third phase. One of the major new entrants is S.B. Protech, which is also a civil engineering contractor for DMRC, has acquired one brand new Manitowoc and Kobelco crawler cranes. Both the cranes are working at the metro sites. 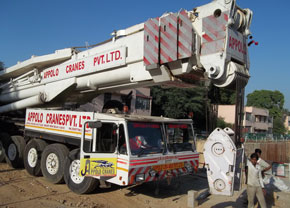 Dehli based Appolo's 650 all terrain crane at Sarojini Nagar, Metro Station Site
While the emergence of new entrants is a positive development for crane manufacturers, however, the entry has intensified competition with the entrants making inroads into the mass market that was erstwhile dominated by heavy weight like Apollo Cranes, Janak Cranes or Arjun Enterprises who also posses capacities beyond 150 tons. Entrants of the new players in the mass category, has reinforced the sentiment of bargaining power remaining greatly skewed in favour of the crane hirers in DMRC third phase projects, thus lowering the rates down in the lower category 70-80-100-150 tons crawler units generally constitute 60% of the crane composition of Delhi-NCR market. For mobile units, the composition is more or less of the similar order.

Large scale thronging of the market in the medium and heavier segment by Mumbai based firms in Delhi-NCR, to offset their existing operating costs and pay back bank liabilities, exacerbated, by retrograded equipment utilization during the last few years, made Delhi based firms look for greener pastures in other parts of Northern region by diverting their units. Brown field expansion of cement plants in Rajasthan and other bridge infrastructure projects in Jammu region contributed to the rescue. Appolo with strong market links gained even from markets like Bangladesh by supplying cranes for railway projects in the country. 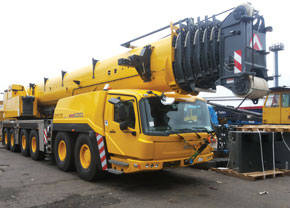 Mumbai based crane hiring agencies have been acquiring large numbers of medium an high capacity cranes for wind mill and industrial projects. Brand new Grove 300 tons mobile crane recently brought by Mumbai based firm.
Sigh of relief is coming to the Delhi based crane renting firms with improved off take of units in the lighter, notably medium and heavier capacities from mid 2013 onwards. Revival of demand from infrastructure and industrial projects is making a positive impact on business of the Delhi based firms. Revival of demand from the other parts of the country, has been characterized by firms from outside Delhi, immediately pull back their cranes following completion of their contracted jobs with DMRC followed by deploying their cranes elsewhere. Major relief of the Delhi based firms has come from Reliance Jamnagar expansion. Majority of Mumbai and other Western Indian crane companies with lighter, medium and heavier capacity fleet are entering into long-term contracts with Reliance, bringing respite to the Delhi market. Major respite is provided by greenfield LNG based, unit C2C3 petrochemical unit of Oil and Natural Gas Corporation at Dahej, Gujarat as well. Gujarat based crane heavy weight, Express Logistics is having a major presence with its cranes at the C2C3 project.

Relief is also expected to come further with requirements of cranes going up soon, for the construction of LNG storage tanks and regassification units under the third phase capacity expansion of LNG Petronet's terminal at Dahej, near to C2C3 project. Beyond doubt, Mumbai and Gujarat based agencies will bid for the jobs. Demand of cranes is also expected to go up from the Dahej Special Economic region as more industrial units, opting to run their plants on softening LNG prices come up in the region in near future, aided by the third phase expansion of Petronet's Dahej terminal (Petronet has already in place assured off take agreements with existing and upcoming industrial units in the region, indicating flurry of industrial activity in the region).

Pressure on the Delhi market is also likely to be relived due to deployment of cranes in large scale by Western Indian firms for windmill projects. Agencies are going in for major acquisition of medium and heavier capacities, new mobile and crawler cranes, for deployment at upcoming windmill projects and also for windmill maintenance jobs. As per recent enquiries, some of the new cranes have been put at a major commercial project of Reliance taking place at Bandra Kurla Complex in Mumbai. 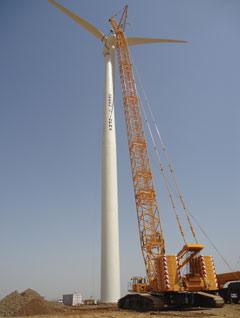 Upcoming wind mill projects are expected to attract large numbers of cranes
Delhi based crane rental firms will prefer to take the advantage of the competition relived market. Enquiries reveal, majority of small, medium firms will refrain from sending their cranes far away to other states. This is so as to keep their operation costs under control, which has gone up due to higher inflationary pressures in the market despite underutilization of the equipment, resultantly putting pressure on the firm's capital reserves. However, bigger firms with minimal bank liabilities will look for jobs even outside Delhi. Nonetheless, they will refrain from taking windmill jobs. Delhi based firms will be looking for comfort zone by bidding for prominent jobs like pipeline construction work of Delhi Jal Board, cement plants expansion in Rajasthan, IOCL's Panipat refinery maintenance jobs, railway projects in Rajasthan and UP.

With softening of competition and indication of newer jobs coming up in Delhi and NCR region, crane renting firms are toying with the idea of acquiring newer and also second hand units in 250 tons range. Possessed with the new cranes, along with existing fleet getting well rationalized (many firms will look to deploy their smaller cranes to support the bigger cranes), the firms may have better bargaining power leading to northward movement of rates. The argument can be backed by the fact as there is already an indication of firming up of rates in Delhi-NCR region. However, the picture will be clear as demand goes up in near future.