Putzmeister (PM) recently celebrated the 50thanniversary of thefoundation of the company. On this occasion, the company presented the M 70-5, the largest truck-mounted concrete pump boom in the world.

With a vertical reach of around 70m and the largest working radius ever achieved, the M-70-5 has raised the bar definitively in the concrete construction sector. The first unit is destined for an American PM customer based in California and several other orders have already been placed. The machine is fitted with large-capacity 2-cylinder piston pumps that can attain a maximum output of 200 m³/h.

To comply with the legal regulations in certain US federal states, Putzmeister has mounted the large-boom concrete pump M 70-5 on a 10-axle semitrailer, the version planned for Europeancustomers. It will be configured differently for other countries. The boom, base structure with support and outriggers, pump unit and independent power engine (330 kW Deutz 6-cylinder diesel within international emission standard TIER 3) are located on the semitrailer and of the five axes available, three are steered. The customer has selected a 370 kW Ken worth C500B (10 x 6/4) as a tractor unit. Of five axles on the tractor unit, three are driven fully suspended (cardan) and two of them are hydrostatically driven (for slow speed over rough terrain). Two axes are steered.

This semitrailer solution enabled Putzmeister to develop an extremely mobile large-boom concept with a turning radius of less than 18m suitable for use both on and off road. Thanks to this design, the world’s largest truck-mounted concrete pump is aslexible as the units much smaller. The 5-arm boom in a roll Z fold configuration has a vertical reach of around 53m and a horizontal reach of 17m, far superior to that of other machines. When operated in restricted space, the large boom can unfold fully within the footprint of the machine. During pumping operations, the tractor unit remains rigidly connected to the semitrailer and acts as a counterweight. 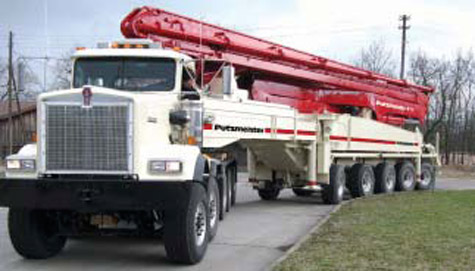 Three axles of the semitrailer and two axles of the tractor unit are steered. So the M 70-5 is as easy to handle as a much smaller truck mounted Concrete Pump.

Putzmeister has used special high-strength materials in the steel frame to reduce the load moment of the huge placing boom and also for the hydraulic cylinders to achieve weight-optimised construction.

Thanks to the OSS system (One Side Support), PM large-boom pump can be installed and operated safely on construction sites where space is restricted. The width of the front and the rear support is reduced to only 9.2 m during OSS operation,

In M 70-5, concrete is pumped through low-wearing, twin-wall delivery pipes (ProLine 67 HRC, DN 117). These have a life span up to 10 times longer than standard pipes (ST 52) according to experience.

The remaining equipment also clearly demonstrates that powerful Putzmeister truck-mounted concrete pumps are not only characterised by their boom length. The M 70-5 is fitted with an EBC (Ergonic Boom Control). The EBC allows the operator to control the boom more easily using a joystick, to reduce vibrations at the vertical end hose and to limit the working area i.e. to avoid dangerous zones.

The machine is fitted with an EOC (Ergonic Output Control) as standard. The EOC module helps the concrete pump save fuel during operation by automatically adjusting the engine to the maximum speed required for the current pumping output. If required, this speed can be increased or decreased at any time via the radio remote control, resulting in lower fuel consumption, less wear and reduced noise levels during pump operation.

The truck mounted concrete pump with world record boom M 70-5 introduced on Putzmeister’s 50th anniversary is another milestone in the company’s technology.

The Ergonic Graphic Display (EGD) on the radio remote control and the control cabinet provide the machine operator (or service engineers, if required) with information on the operating state of the machine at all times. Display parameters include the hydraulic temperature, hydraulic pressure, stroke time, engine speed, delivery pressure/limit, delivery rate/limit and operating hours to name a few.