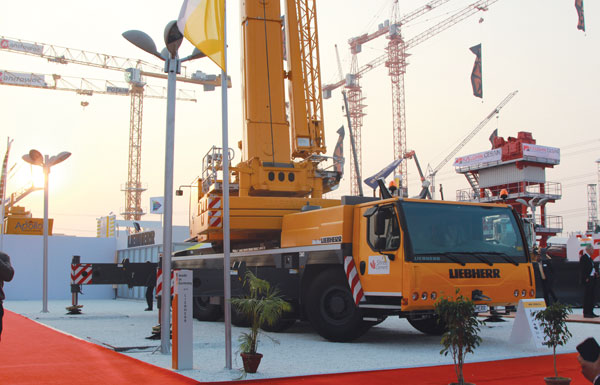 Liebherr all terrain crane, LTM, 1220-5,2, 220 tons at BC India 2015. The brand new crane was acquired at the event by Shree Cements Group for maintenance of its cement plants and also for construction of its new plants. The company has plans to acquire few more units for expansion of its plants.

Followed by prolonged period of bearish off take, the Indian crane sector witnesses an interesting trend. The actual project owners are showing keenness to purchase newer units. The acquisitions are taking place mainly across the medium and higher segment of tire mounted mobile and crawler lattice boom cranes. The purchases are reversal of the buying trend witnessed between 2007 and 2010 when project owners going in for capacity expansion of their production units or for putting up newer facilities mostly resorted to hiring of cranes. This was to keep their capital and operational expenditure under check to hedge the rising construction costs and finally lower returns of the final product due to high inflation. According to crane manufacturers, end users have been buying almost three to four units every year since 2010 and their expectations are that the pace of acquisitions is well likely to pick up.

Following delivery of brand new, LTM 1220-5,2 all terrain 220 tons crane by Liebherr to Shree Cement, one of the biggest cement producers in North India, Liebherr is expecting fresh enquiries from the company. The new crane will be deployed for commissioning of upcoming plant at Raipur and also for undertaking regular maintenance jobs at its existing plants at Beawar, Ras, Khushkhera and Suratgarh in Rajasthan. Liebherr has recently supplied customized tower cranes to ship repairing yard also in India. Chinese crane manufacturing major Sany also has booked good numbers of truck mounted telescopic cranes which are in the process of being delivered to end users. With growing mobilization of units, Sany India is getting fresh enquiries from project owners and developers at par with other crane manufacturers in India. 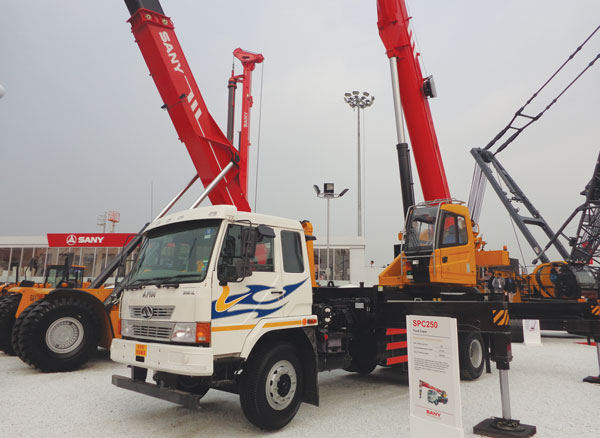 The business segment showing interest for newer cranes is mainly the cement plants owners and developers. Buoyed by the announcements of new infrastructure projects and relaxation of finance for infrastructure developments, cement companies are getting ready for future needs by adding fresh capacities and also through brownfield expansions of their existing units. Among the cement producers, JSW Group has lined up with major capacity additions. The company will soon start expanding its production capacities to 30 million tons by 2025 from 5 million tons at present. Apart from JSW Group, there are other cement manufacturing companies like Ultratech, Konark, Jindal, Jaypee Cement and Dalmia who are planning to enhance their production capacities close to 4 million tons.

The vital reason of acquisition of cranes for captive usage by the cement companies is safe and timely completion of projects. The second major reason is to have minimum downtime of the plants. Backed by state-of-the-art advanced production processes, cement producing companies across the country are now firmly working on elaborate maintenance plans to minimize their plant maintenance schedules so that they would have faster and continuous product availability. Newer self owned, well maintained cranes, working for the captive purposes, the production managers of cement companies argue, can deliver higher equipment uptime and consequently enhanced plant availability. Most importantly, the reason of buying new cranes, which are of mostly medium and higher capacities, is just to ensure good return on capital investments. Monitoring the trend towards growing dearth of availability of new or well maintained medium and higher capacities of mobile and crawler cranes in the market, cement companies are hiring cranes from the rental agencies due to high rates that can affect their operational costs in future. 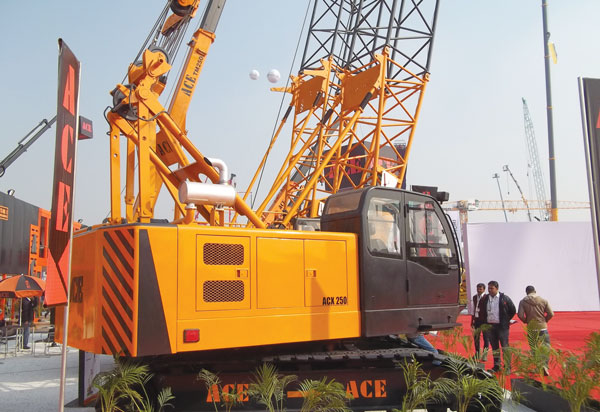 Renewed emergence of buyers for captive use is a new business trend that may probably gain momentum as newer projects will speed up, resulting in demand for medium and heavier capacity cranes. However, the trend is not going to significantly affect the percentage share of the rental companies buying cranes, not at least in the mid-term. 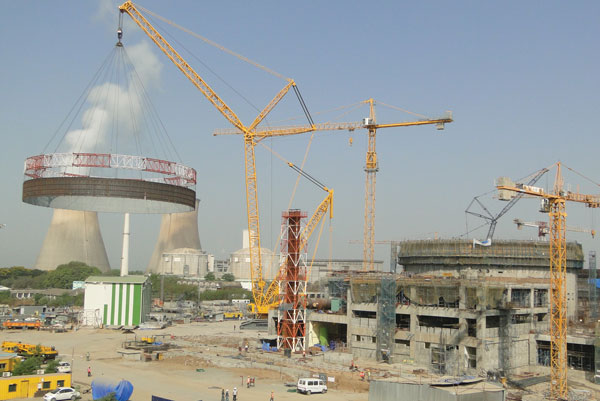 Upcoming power projects are putting up demand for newer cranes.

The focus of crane manufacturers and dealers will remain strong for promoting sales to the rental companies. This is mainly due to emphasis by construction companies to offload their assets liability. With offloading strategy of the assets, the construction firms get completely insulated from incurring expenditure to acquire new cranes and from the liability of incurring expenses towards maintaining post warranty period. Most importantly, the project developers get immediate deliveries of the cranes from the rental agencies, as large numbers of underutilized units are available in the market. Large supply exceeding demand also benefits the construction firms to get cranes at a discounted rate.

According to rental companies, the accurate figures of hired cranes by contractors are not available, however, acquisitions of lighter and lesser engineering specialized tower and mobile cranes have been quite fair in recent years. Sany has recently delivered couple of units of its indigenously manufactured 25 tons with AMW chassis, truck mounted telescopic stiff boom cranes to rental agencies and EPC contractors. These cranes have been deployed at steel stock yards for handling finished products. 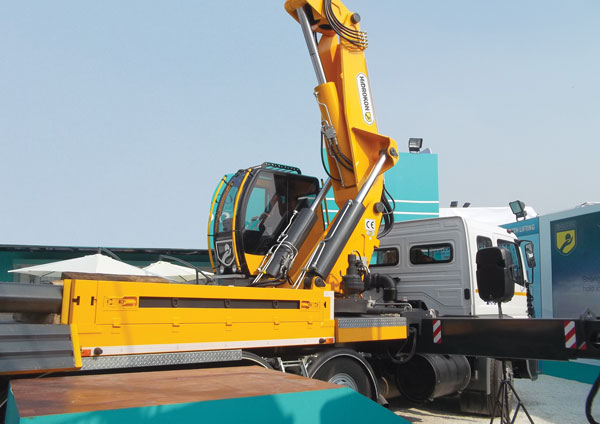 HK 90 L6L4 truck mounted telescopic knuckle boom crane from Turkey based manufacturer Hidrokon at BC India 2014. Kobelco has entered into a distribution tie up with Hidrokon for its truck mounted cranes in India. It has sold one 30 tons HK 90, mounted on Bharat Benz chassis to Mumbai based rental firm, Shree Dinesh Industries.

The construction companies like HCC and Gammon are heavily resorting to obtain cranes from retail companies to maintain appropriate liquidity without incurring higher operational costs and to run their operations to stay in business characterizing extended payment schedules. Larsen & Toubro has in a big way resorted to acquire equipment from rental companies. Focusing on the concept of modularization of construction, L&T has been incorporating leaner construction methodology in its project executions plans. This is owing to completion and finally delivery of projects on time to its clients, enabling it to get right profit margins. L&T has posted a 9 percent (Rs.870 crores) rise in net profits for the December quarter on the back of higher revenue and stable margins. The company's net profit in the last quarter of 2014 was Rs.800 crores. 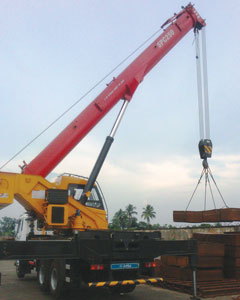 New Sany SPC 250 working in steel yards.
While it is present and future projected need-based requirement that is leading to demand from the end users and the rental companies, however it is the prevailing superior bargaining power with the buyers in the repressed crane market that is allowing them to go for fresh purchases from crane manufacturers. Buyers procuring cranes very recently, crane companies agree, have managed to get some best deals and service backup packages owing to aggressive competition in the market. Aggressive business strategies to build up brand presence in the Indian infrastructure sector with strong demand fundamentals could probably be due to slowdown in sales in other global markets experienced by crane manufacturers. This can be examined in view of crane manufacturing heavy weight Terex Cranes. Terex Cranes's profit has been down in the third quarter. Revenue was down 7 percent to $420 million. Operating income came in at $21.8 million, a 25 percent fall compared to a year ago. For the third quarter 2014, net sales for Manitowoc Cranes was $569 million down from $610 million in the third quarter of 2013. Decline in sales has been reported by Chinese companies. The fall in revenue has been due to constrained demand across global markets. Increased availability is one of the major factors for enlarged sales of the units. Comfortable exchange rates could have led to more number of transactions.