Talib & Shamsi Constructions has grown its fleet of Potain tower cranes to 14 units since 2007 and has just placed orders for two more. The two newest Potain cranes to arrive at the company are MCT 85 models, both of which are working on the DSK Dream City development in Pune. And its two latest orders are for MCT 205 cranes. Both the MCT 85 and MCT 205 are new models, launched by Manitowoc at the end of last year. 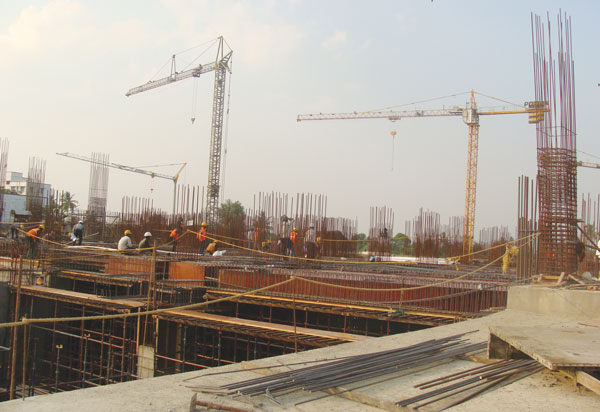 Amjad Shamsi, managing director of Talib & Shamsi Constructions, explains that as his company has grown and as commercial construction projects in India have increased in size, tower cranes have steadily gained in importance – to such a point that they are now a much-needed focal point of his company's work.

"The productivity benefits of Potain tower cranes means they are now indispensable to our operations, especially the latest models with their high winch speeds which are perfect for high-rise buildings," he said. "Before 2007, we used no cranes for our construction projects because we could rely on a ready supply of labor, and buildings were generally under 100 m. But as building heights rose and demands on contractors increased, we saw the benefits of tower cranes. We knew the reputation of Potain cranes even before we purchased our first unit and we've been very pleased with them ever since."

Potain introduced its MCT 85 to the Indian market in December of 2014, unveiling it to customers at the bC India trade fair in Greater Noida. It has a 5 t maximum capacity, a 52 m maximum jib length and can lift 1.1 t at the jib end. Manitowoc is producing the MCT 85 at its factory in Pune, which builds a range of Potain tower cranes for customers in India and surrounding nations. 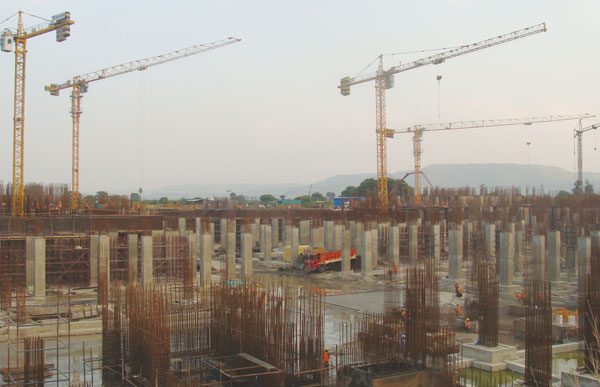 The DSK Dream City project is being built for D S Kulkarni Developers. The huge project covers an estimated 142 hectares and includes apartment blocks, leisure facilities and a five-star hotel, all in a self-contained community with its own parks, waterways and transport network.

The two Potain MCT 85 cranes are engaged in the first stage of construction, working with two of Talib & Shamsi Constructions' Potain MCi 85 A cranes. The four cranes are operating together to build a cluster of eight towers, ranging from 17 to 26 stories, with the tallest reaching a final height of around 110 m. The cranes are lifting a variety of construction materials including the aluminum formwork used to set the concrete. Work began in March this year and this phase of development is expected to last two years.

"Potain cranes are a fine product and the new MCT 85 is a welcome addition to the range," noted Shamsi. "It has a longer jib and the assembly time is faster, so it has benefits over its predecessor, the MCi 85 A. We also like the fact that Manitowoc has a local factory and the price is very competitive. There's no other supplier that has the operations and customer support that Potain does in India."

Other Potain MCi 85 A cranes belonging to Talib & Shamsi Constructions are currently working on the completion of several projects in the company's hometown of Mumbai. For example, two units are on a project in Thane helping build seven towers where heights will reach 140 m. And in Nahur, the Ashford Royal project is using two MCi 85 A cranes for the construction of four residential towers that will eventually reach 180 m. Another MCi 85 A has recently completed work on the Nirlon Knowledge Park, a new IT business hub.

In total, Talib & Shamsi Constructions has 12 MCi 85 A units, plus the two recently-arrived MCT 85 units. In addition it will soon welcome two of the larger MCT 205 cranes, which will be its biggest cranes. Like the MCT 85, the MCT 205 was introduced to Indian customers at bC India. It has a maximum capacity of 10 t, a maximum jib length of 65 m and a jib end capacity of 1.75 t. The company will put both new MCT 205 cranes to work on a 175 m tall building in the Parel area of Mumbai.

Talib & Shamsi Constructions is based in Mumbai and has been in business for 40 years. It has built more than 25 high-rise buildings and more than 15 commercial developments.