Two Potain MCi 85 A tower cranes are at the center of the $32 million Basholi Bridge, a three-year construction project in Jammu, India. The 5t capacity cranes are working 12 hours a day performing general lifting duties and pouring concrete. 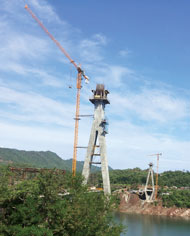 "This vast bridge is a key project for India that will give a much needed boost to the area's relatively low economy. We have total confidence in our Potain cranes, given their reach, capacity and proven capabilities. As such, we have put considerable focus on completing the project on time and within budget, and the cranes are helping us make that a reality."

Basholi Bridge will span 592 m (1,942 ft) across the Raavi River with pylon heights reaching 88 m (288 ft) to support a two-lane road that will connect Himachal Pradesh and Punjab with Jammu and Kashmir. The bridge is expected to boost the region's socio-economic status, while increasing tourism and commercial mining opportunities in the region.