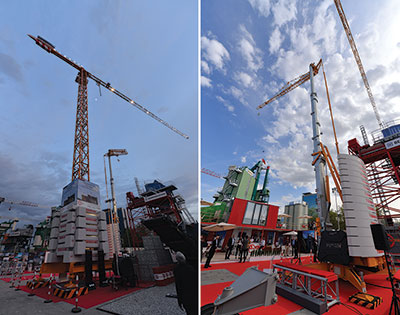 Potain and Grove cranes were showcased at international construction equipment trade fair, Komatek 2017, in Ankara, Turkey, this May. Manitowoc was represented at the show through two of its Turkish dealers, Istanbul-based TeknoVinç and Ankara-based Karun. Potain distributor, TeknoVinç, displayed a Hup 32-27 and a MDT 219 at the show, while Grove distributor, Karun, presented a GMK6300L.

“Komatek is a key show for the Turkish construction market,” said Omer Suicmez, sales and marketing specialist at TeknoVinç. “We were pleased to present the innovative Hup 32-27 self-erecting crane and the MDT 219 topless crane. Both models drew a lot of attention and helped us close a number of important deals, including the sale of an MDT 219. Our team was also able to celebrate sales of MC 175, MC 125, and Igo M14 units.”

Grove dealer, Karun, also had a successful show. “Grove cranes are highly regarded in Turkey, with popular models in the country that include the GMK6300L, GMK4100L-1, and GMK5250L all-terrain cranes, as well as rough-terrain cranes from 30 t to 70 t,” said Orkun Oztuna, general manager of Karun. “We exhibited a GMK6300L at Komatek, and after the show, it was delivered to its new owner, Sahin Hidrolik. There are now 15 GMK6300L units in Turkey, making it one of the most popular choices in the six-axle category.”

Visitors to Komatek got the chance to get a closer look at the Hup 32-27, MDT 219, and GMK6300L. The Hup 32-27 has a maximum capacity of 4 t, while it can lift 1 t at its jib end of 32 m. The maximum height under hook of the crane is an impressive 40 m. Several jib configurations are available, which offer horizontal reaches of 11 m, 23 m or 32 m maximum. With the possibility to raise the jib at 10°, 20° or 30° along with the telescopic mast, the Hup is one of the most versatile self-erecting cranes available.

The 10 t (11 USt) MDT 219 has the highest capacity of all models in the MDT CCS City tower crane range. It features Manitowoc’s exclusive Crane Control System (CCS) and has faster set-up and configuration, plus enhanced operator controls over previous generation tower cranes. From the Grove line, the 300 t capacity GMK6300L offers one of the strongest lift capacities of any six-axle all-terrain cranes. It has a seven-section main boom that reaches 80 m, and its MEGATRAK independent suspension and all-wheel steer system allows its wheels to remain on the ground at all times for easier navigation of job sites.

TeknoVinç has been one of Turkey’s most prominent tower crane suppliers since 1990, and was the first company in the country to offer rental tower crane services to the construction sector. The company currently has the largest tower crane fleet in Turkey.

Karun supplies the full range of Manitowoc crawler cranes and Grove mobile cranes in Turkey. Cranes sold by the company are not only used in Turkey, but also by Turkish companies working in neighboring countries across North Africa, the Middle East and Central Asia.

The 15th edition of Komatek was held at Atatürk Cultural Centre in the Turkish capital, Ankara. The five-day show ran from May 3 – 7 and was attended by more than 33,000 visitors, with 369 exhibitors from 22 countries taking part.