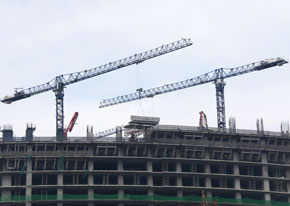 The LC2100 series was mainly designed to operate in industrial, mining, infrastructure and public works projects and is one of the most successful series from the tower crane manufacturer, Linden Comansa. Over the last few months, the R&D team of Linden Comansa has worked to optimise various models of this series, which are now available in the market.

18 to 20 tonnes
The 21LC335, 21LC550 and 21LC660 cranes with a maximum load capacity of 18 tonnes have been optimised to load up to 20 tonnes. This improvement is mainly due to the fact that the trolley/hook assembly has been strengthened, and the hoist cable has been modified to the compact type with improved mechanical characteristics.

24 to 25 tonnes
In the case of the 24-tonne 21LC550, the maximum load capacity is increased to up to 25 tonnes. In addition, the load chart has been optimised. Similar to the 18-tonne cranes, these improvements are due to the fact that the 21LC550 now features a newer and lighter trolley/hook assembly than the previous model, and the hoist cable has been replaced with a compact and more resistant system. 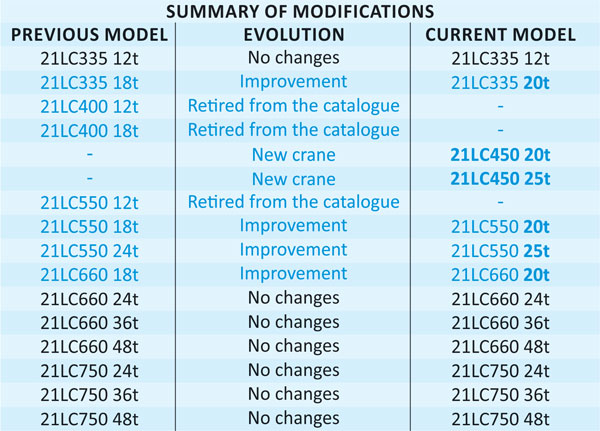 To achieve such an obvious improvement, not only have the hoist cable and trolley/hook assembly been modified, but the slewing part of the 21LC400 has also been replaced (turntable, slewing ring and cat-head) with a newly designed unit, which is common to the slewing part of the 21LC550 25t. To this end, not only is the crane strengthened, but modularity and interchangeability of elements between the new 21LC550 25t and 21LC450 are also facilitated. In addition, most jib, counter-jib and tower sections of the 21LC450 are identical to those of the 21LC400, which allows companies that own both models to swap sections as needed.

In addition to the two versions of the 21LC400, the 21LC550 with a 12-tonne maximum load capacity has also been retired from the catalogue, as currently Linden Comansa offers better alternatives to the market.