With this new model of maximum load capacity of 64 tonnes, Linden Comansa boosts its range of products and responds to the growing demand for high-tonnage luffers 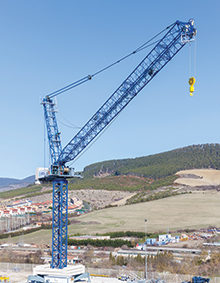 The new Linden Comansa LCL700 comes in two versions of maximum load capacity: 64 and 50 tonnes (141,090 and 110,230 lb).
The use of high-tonnage, prefabricated components and extremely large steel beams in construction is a growing trend, based on the fact that it reduces project-completion times. In construction projects involving space constraints, which are becoming increasingly common in the world's largest cities, there is often a need to use large cranes with luffing jibs that enable them to lift extremely heavy loads while avoiding other cranes and nearby buildings.

New York, Seoul, London, Bangkok, Mexico City, Shanghai, Paris, Melbourne, Frankfurt, are some of the large cities where this type of tower crane is increasingly required. Linden Comansa has responded to that need with the launch of the LCL700, the largest in its range of luffing-jib tower cranes to date.

Two versions of the LCL700 are launched on the global market, with maximum load capacities of 64 and 50 tonnes (141,090 and 110,230 lb). By means of simple manual modifications, the maximum load capacity of the cranes can be reduced to 32 and 25 tonnes respectively (70,550 and 55,120 lb), resulting in increased hoist speed and productivity. This change on the hoist system from double line to single pull line is one of the many improvements that have been implemented into this model based on recommendations from Linden Comansa clients. 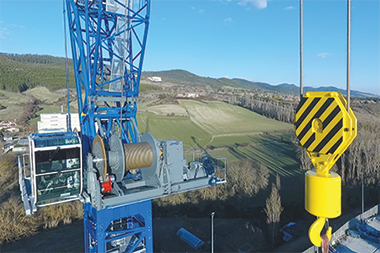 The radius of the counter-jib is also extremely short, measuring just 9.5 metres (31.2 ft), with the potential to be reduced to 8.7 metres (28.5 ft) by assembling the crane with steel counterweights rather than the standard concrete counterweights. Despite its size, the counter-jib is spaciously distributed, enabling the operator to work and perform maintenance tasks with great ease.

Of the many advantages of this new model, perhaps the most striking is its ease of assembly. The LCL700 leaves the factory ready for quick assembly with pre-assembled luffing reevings, thus, allowing on-site erectors to work faster and the assembly time to be reduced. The components can be quickly connected using bolts, the accesses are wide, comfortable and easily-assembled, and the erection weights have been optimised. The heaviest weight for a quick crane assembly would be 18.5 tonnes (40,785 lb) and can be reduced to 13 tonnes (28,660 lb) by removing some of the components pre-assembled at the factory and lifting them separately.

According to Martín Echevarría, Sales Director at Linden Comansa, “the large cities in North America, South America, Europe, Asia, and Oceania, are beginning to feel the need for high-capacity luffing-jib cranes in some of their projects. We see that as an important market for the LCL700. Our new luffing-jib crane offers high performance, is extremely competitive and has a number of differential advantages that we hope set us apart from the competition.”

To introduce the new model, which will be available worldwide from March this year, Linden Comansa has held two open-door events in February for some of its clients and distributors. Those in attendance were given a detailed insight into the advantages of the new model and attended a brief demonstration by the first prototype, which had been set up a few months ago at the Linden Comansa factory in Huarte, Spain, where final testing is being carried out.

Furthermore, anybody attending the ConExpo-Con/Agg trade show (7-11 March in Las Vegas, USA) and interested in the LCL700 luffing-jib crane, will be able to see its benefits and features first-hand at the Linden Comansa booth (G-2789, Gold Lot outdoor area).