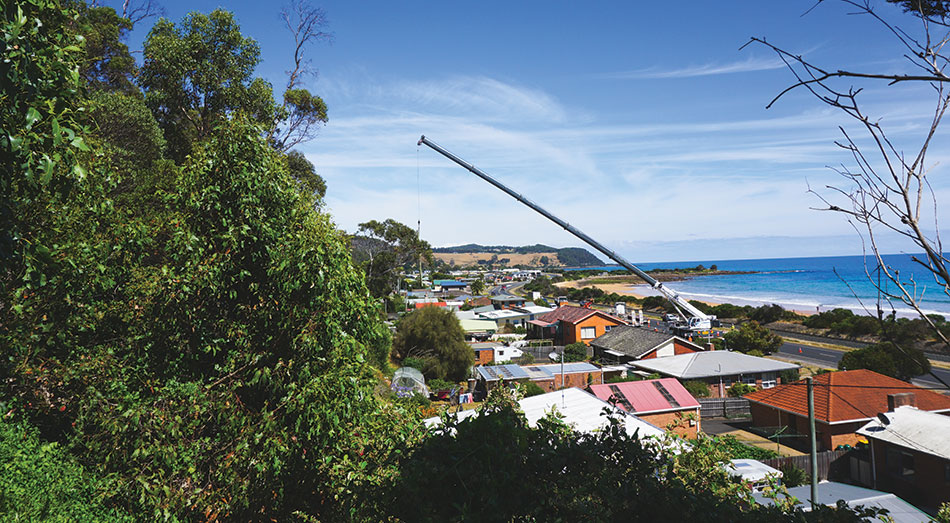 Towards the end of last year, Australian crane rental company, Cranes Combined, received its latest Grove crane, a GMK5150L all-terrain. Company owners, husband-and-wife team Chris and Cathy Kolodziej, bought the 150 t unit to replace an older 100 t-rated GMK4100L, which was purchased back in 2011.

The GMK5150L is not only an upgrade in capacity but also the lightest five-axle crane in the 130 t – 150 t class, which is also easier to configure for travel, making it ideal for Australia and its notoriously-strict road regulations. Dispatching the crane is easier and faster for Cranes Combined, which serves clients across the state of Tasmania.

“It’s always a challenge to configure a mobile crane to meet local road regulations, and in some cases, we’ve been unable to send a crane to certain projects because of road restrictions,” said Chris Kolodziej. “But this new GMK5150L is a totally new design. It’s very light: the weight can be reduced to under 50,000 kg, which enables it to have much better road access than anything we’ve previously owned. In the end, it was an easy decision to upgrade. The GMK5150L is not only easier to move but because it has greater capacity, we can use it on a wider range of jobs.”

John Stewart, vice president and general manager for Manitowoc in Australia, said that the design of the GMK5150L is focused on enabling easier road travel, particularly in markets such as Australia.

“Grove all-terrain cranes deliver light axle weights combined with extremely strong load charts and long booms,” he said. “They also offer superior mobility through the unique Megatrak drivetrain. The combination of innovations and technologies in the GMK5150L is a game changer for the mobile crane market in Australia.”

Cranes Combined was established in 1996, and has the largest fleet of mobile cranes in Tasmania. The GMK5150L is one of two Grove all-terrain cranes it owns, the other is a GMK3055 crane bought in 2016.